Jim Prentice, the stalwart conservative politician who rose to the ranks of senior cabinet minister before serving a tumultuous short term as Alberta's premier, died late Thursday with three other people in a plane crash just outside of Kelowna.

Mr. Prentice's death left many in his home province, and across the country, in shock. Despite his political highs and lows, the 60-year-old who moved with ease between political, business and First Nation communities was revered by many as a centrist bridge-builder and devoted public servant.

He had spent the past year building an identity beyond his public life, including working on a book about energy and environmental issues, after his Progressive Conservative party's monumental defeat to the Alberta NDP in the May, 2015, provincial election. He was inseparable from his wife, lawyer Karen Prentice, and had three grown daughters.

"Words cannot begin to express our profound shock and heartbreak at the news that our beloved husband, father and grandfather, Jim, has died in this tragic event," the Prentice family said in a statement.

Mr. Prentice had been on a golf trip to B.C. this week, according to reports. He was travelling back to Calgary by Cessna 500 business jet with Ken Gellatly – the father-in-law of Mr. Prentice's daughter, Cassia Gellatly Prentice – and two other people, who have not been identified, when the crash occurred.

"To lose two family members at once is unbelievably painful," the family statement said.

RCMP said they were first alerted to the crash by air-traffic controllers shortly after the plane left the Kelowna airport around 9:30 p.m., said Corporal Dan Moskaluk, a spokesman for the force.

It took several hours for local officers and a nine-member search and rescue crew to reach the crash site, which is on a heavily wooded slope of private ranch land about 18 kilometres north of Kelowna. They found no survivors.

"The site itself had catastrophic damage," he told reporters at a news conference Friday afternoon.

The B.C. Coroners Service arrived on the scene Friday and two teams of investigators with the Transportation Safety Board were expected to get there Friday evening. The coroners will lead the recovery process while the TSB will try to determine what caused the fatal crash.

Words of condolence for Mr. Prentice's family came from all levels of government and all parties on Friday. Prime Minister Justin Trudeau issued a statement saying Mr. Prentice brought deep convictions to his work in law, business and politics.

"He was broadly respected in the House of Commons – across all party lines – for his intelligence, commitment and honest straightforward approach on tough issues. I greatly enjoyed the time I spent working closely beside Jim in the House."

Rona Ambrose, federal Conservative interim leader, said Mr. Prentice was "a pillar of Canada's conservative movement." Her voice cracked with emotion when, speaking to reporters in the House of Commons, she addressed Mr. Prentice's wife and their three daughters, Christina, Cassia and Kate.

"We hope that you are comforted by the incredible respect and gratitude that's being shown to Jim across the country."

Alberta Premier Rachel Notley, who lost her own father – the groundbreaking Alberta NDP leader Grant Notley – to a plane crash in 1984, said "there are no words adequate for moments like this, as my family knows very well."

And Stephen Harper, for whom Mr. Prentice was a senior minister for four years in Ottawa – and who provided the former prime minister with friendship, advice and a steady hand in cabinet – said he and his wife, Laureen, were shocked and saddened by the news.

"Jim was a family man, friend, leader and most importantly, a proud Canadian," Mr. Harper said on Twitter.

Friends, family and political confidantes were seen going in and out of the Prentices' inner-city Calgary home throughout the day Friday. On summer weekend days, people walking in an adjacent pathway could often see Mr. Prentice and his wife sitting on their large veranda, the Canadian flag flying from a rooftop.

Mr. Prentice was born in South Porcupine, Ont. He moved to Alberta as a teen and part of his often-told back story included looking out the window of his family's station wagon at the Rocky Mountains, and determining he had found his true home.

He trained as a lawyer but his true passion was politics, a career that began with backroom work for the federal Tories in the 1970s and an unsuccessful provincial run in 1986. In 2003, he ran for the federal Progressive Conservative leadership to replace leader Joe Clark, but lost to Peter MacKay. But he found electoral success as an MP in the 2000s.

Known as a moderate conservative, he played an integral role in bridging the divide between fiscal hawks and Red Tories in the federal Conservative Party. Mr. Prentice was a federal cabinet minister in Mr. Harper's government from 2006 to 2010, handling the Indian Affairs, Industry and Environment portfolios.

As federal environment minister, Mr. Prentice was skilled at finding common ground between what was then a fast-growing oil-sands sector, and environmentalists and First Nations opposed to development, said Rick George, former chief executive officer of Suncor Energy Inc.

"He had a way of calming the room down and getting people to really talk about solutions," Mr. George said in an interview Friday.

With no indication that he would be given a near-term opportunity to run for the leadership of the federal Conservatives, Mr. Prentice left politics in 2010 to become a senior executive at CIBC. However, he was drawn back into the public sphere in 2014, when he threw his hat in the ring to lead the provincial Progressive Conservatives. While he easily won the leadership race that year, the general election on May 5, 2015 was a different matter.

In a turn of events no one would have predicted even weeks before election day, Mr. Prentice – premier for just eight months – led Alberta PCs to a massive defeat after 44 years in power. In retrospect, a sometimes ham-handed campaign, the instability of four premiers in five years, and the party's inability to balance the budget in good economic times was blamed. Voter cynicism was also fuelled by the carefully orchestrated mass floor crossing of Wildrose MLAs several months earlier.

Friend and former federal cabinet minister Chuck Strahl said Mr. Prentice had to carry the sins of more than four decades of governing the province.

"He took [the loss] very personally. He said as much on election night. He shouldered his responsibility for that," Mr. Strahl said. "In reality, he reaped the whirlwind. He didn't sow it. He reaped it."

Still, he said Mr. Prentice didn't obsess about it, but tried to buck up those around him. "He took time afterwards to reconnect with his family and all that stuff," he said. "He was also a big enough man to move on from it."

Since then, Mr. Prentice worked away from politics. He had a strong reputation in the country's oil patch, where he previously worked as an adviser for pipeline company Enbridge Inc. and, more recently, for private-equity firm Warburg Pincus LLC.

Murray Edwards, the billionaire founder of oil-sands giant Canadian Natural Resources Ltd., said Mr. Prentice "was always the one with the positive energy in the room on some very challenging matters."

As a lawyer, he also had a special relationship with First Nation communities, and worked on a number of key aboriginal land claims. Jim Boucher, chief of Alberta's Fort McKay First Nation near Fort McMurray, said "Jim was a friend to our people, and he approached our relationship with honesty, integrity and a genuine desire to understand our issues and concerns."

The two men had a long relationship, but as premier, Mr. Prentice had made special recognition of Moose Lake – an area the Fort McKay First Nation considers one of the last remaining pristine areas in the oil-sands region they call home.

The former premier's close-knit political circle is still mourning Progressive Conservative MLA Manmeet Bhullar, 35, who died in a highway crash just 11 months ago and had been mentored in politics by Mr. Prentice from the age of 10. On Friday, Calgary Mayor Naheed Nenshi recalled how the young Mr. Bhullar and Mr. Prentice met, more than 25 years ago when the Sikh community was struggling to establish itself in the city and was trying to get Calgary's first gurdwara built.

"They faced a lot of opposition from a community that didn't know much about their faith," Mr. Nenshi said. "They were represented by an idealistic young lawyer who fought for respect, acceptance and diversity. That lawyer was named Jim Prentice."

With reports from Ian Bailey, Jeff Lewis and Sunny Dhillon 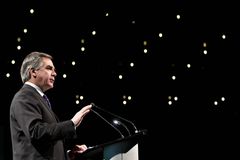 Jim Prentice: A decent man, seemingly ill-suited to harsh world of politics
April 6, 2017
Jim Prentice remembered as the ‘go-to guy’ in Harper’s cabinet
April 6, 2017
Jim Prentice was the man at the helm as the Alberta PC dynasty ended
April 6, 2017
Follow Kelly Cryderman, Mike Hager and Tu Thanh Ha on Twitter @KellyCryderman @MikePHager @TuThanhHa
Report an error Editorial code of conduct
Due to technical reasons, we have temporarily removed commenting from our articles. We hope to have this fixed soon. Thank you for your patience. If you are looking to give feedback on our new site, please send it along to feedback@globeandmail.com. If you want to write a letter to the editor, please forward to letters@globeandmail.com.
Comments