They come to him for work, and Demetrius Smith, better known as Pee Wee, is happy to do what he can. His favourite gig is taking 60 men to the place where he once starred and 30,000 people chanted his name.

On this day, McMahon Stadium is vacant except for the 60 men who are shovelling snow from the stands in preparation for Sunday's Canadian Football League West Division Final between the Calgary Stampeders and Edmonton Eskimos. Most of the men are homeless. They stay at the Calgary Drop-in and Rehab Centre or, if it is full, sleep outside in the cold.

As the Stampeder who scored one of the greatest touchdowns in franchise history, Pee Wee Smith has a new goal now – he wants to comfort the homeless, even if only for a little while. He admits it will not be easy, but when it comes to taking on a lost cause, Mr. Smith has shown he can surprise people.

"I try to give somebody a hand up," he said of his role as a staff recruiter. "It's like Pay It Forward to help someone else. It's important because homelessness is a real problem in Calgary … It's not right."

In 1990, Mr. Smith was a rookie import receiver for the Stampeders and playing opposite the Eskimos in the West Division Final. He should have scored a touchdown. He had his hands on the ball and flubbed it. Edmonton, as it often did, earned the win and a trip to the Grey Cup.

In the off-season, Mr. Smith returned to Florida, where he had played football for the University of Miami Hurricanes. He told his former teammates what had happened against Edmonton, that he had let everyone down by botching a sure touchdown. He promised that, given a second chance, he would not make the same mistake.

In the 1991 West Final in Edmonton, Mr. Smith fulfilled his vow. With the Stampeders trailing in the game's dying seconds, quarterback Danny Barrett rolled to his left and let fly a 67-yard pass that found Mr. Smith blazing past two defenders to score the winning points.

Mr. Smith celebrated by running through the end zone, off the field and into the Calgary dressing room. The victory snapped the Eskimos' domination of Calgary and sent the Stampeders to their first Grey Cup game in 20 years. By 1992, they were Canadian Football League champions.

"I had never won a game in Edmonton in the CFL, playoff or regular season," former defensive lineman Stu Laird said. "And then a play that will be in Stampeder lore forever."

Mr. Smith spent six seasons in Calgary as a fan favourite, and chose to stay here when his playing career ended in 1996. He bounced from job to job until signing up with International Staffing Consulting Services, a company that provides temporary and permanent employees for a variety of tasks.

Mr. Smith screens workers who come to the ISCS office and hires those he believes are the right people for the job. Most of the time, the men are driven to a construction site, a warehouse or, in the summer, to the Calgary Stampede. Going to McMahon Stadium for snow shovelling is considered a choice assignment.

"We like what he does," said McMahon Stadium manager Don Phelps, who has used Mr. Smith's workers for several years. "I always rag on Pee Wee, telling him, 'No one remembers you any more.' He laughs it off. He's a hard guy to dislike."

While stopping by the stadium this week, Mr. Smith spent time with current players Nik Lewis, Mo Price and Joe West, all of them receivers. He told them, in case they didn't know, how important Sunday's game will be and that there's nothing much better than beating Edmonton to get to the Grey Cup.

"I was on the phone this week with [former Eskimo] Willie Pless. We've been friends since 1990, and we talked about the matchup. We were talking trash to each other," Mr. Smith said. "It's still going on, man."

Duhatschek: Cold feet not an issue for Jon Cornish ahead of West final
May 12, 2018 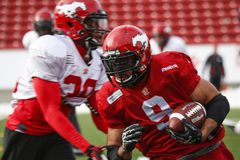 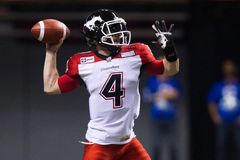 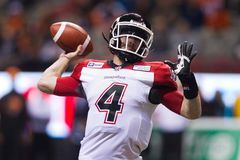 Eskimos advance to West final with win over Roughriders
May 12, 2018 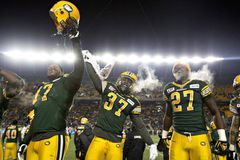