Hosting the 2026 Winter Olympic Games in Calgary could damage Canada's economy and might not even create any jobs, says an independent report commissioned by municipal bureaucrats that has not been made public.

The report, prepared by a University of Calgary economics professor, undercuts Olympic boosters' main argument in favour of the Games: That the event would buoy the economy. The Globe and Mail obtained a copy of the report ahead of a crucial vote on Monday at city council on whether to spend another $2-million studying a possible bid.

Councillors received a summary of the report as part of a larger evaluation of a potential Olympic bid, but did not see the full version unless they asked for it, the city said. A second independent report, prepared by an outspoken Olympic critic, was also kept under wraps.

The report by the U of C professor, Trevor Tombe, debunks the optimistic economic projections politicians have relied upon to guide their decisions so far about bidding on the Olympics.

A study group known as the Calgary Bid Exploration Committee (CBEC) told council on July 24 that hosting the Games could generate "substantial benefits," including an average of 3,000 jobs a year for the nine years leading up to the Olympics, and boost gross domestic product by $2.7-billion to $3.1-billion. The CBEC based these projections on reports from Deloitte and the Conference Board of Canada that are now public. The committee did not operate in concert with city staff and has since been disbanded. Now, city staff are handling the Olympic file alone.

Prof. Tombe, at the request of city staff this spring, examined the projections produced by Deloitte and the Conference Board and came to a much different conclusion.

"To claim that GDP and employment will increase – at all, but especially by the magnitudes suggested in the third-party reports – is to go far beyond what the evidence suggests," Prof. Tombe's report said.

"A more reasonable estimate of the effect on employment of hosting the games is for a change in the type of jobs in which people work, not a change in the total number of jobs," he wrote, adding italics for emphasis.

The Conference Board, Prof. Tombe noted, suggested 9,000 jobs would be created in 2026 alone, increasing the employment rate by about one percentage point. This assumed the people who filled those jobs had no other employment opportunities, the academic said.

"This is not credible," Prof. Tombe said. To say Calgary's employment rate will increase by one percentage point if it hosted the Games "must be taken with a rather large grain of salt," he said.

Prof. Tombe does not believe the third-party reports used appropriate methods to calculate the economic benefits. It is possible the GDP estimates could shrink to "zero – or less" if a more realistic model of the labour market and the amounts of money governments and consumers would spend on the event were considered, he said. However, Prof. Tombe also conceded that hosting the Olympics might boost the economy, but it is not guaranteed.

The city also commissioned a report from Brad Humphreys, an economics professor at West Virginia University, who has produced work challenging claims that the Olympics bring economic benefits.

If councillors vote against providing the extra $2-million on Monday, the city's Olympic aspirations are likely dead. City bureaucrats did not automatically provide councillors with the two critical reports because they did not want to bombard politicians with documents, said Kyle Ripley, Calgary's director of recreation and the city's point person on the Olympic file. He also said the city did not make them public because it did not want to give up competitive information during an international bid process.

"Any councillor who wishes to see any information, absolutely, we would share that with them," he said. "They are well aware of that."

Councillor Druh Farrell, a staunch Olympic critic, said that amounts to burying the reports, which she does not recall ever hearing about.

"The information council was given emphasized the benefits and glossed over the risks. It's difficult to ask to see a report if we don't know it exists," Ms. Farrell said. "I have rarely seen a presentation more predisposed to an outcome." 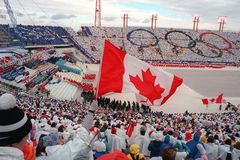 Calgary city council votes to continue exploring 2026 Winter Olympics bid
August 3, 2017
Follow Carrie Tait on Twitter @CarrieTait
Report an error Editorial code of conduct
Due to technical reasons, we have temporarily removed commenting from our articles. We hope to have this fixed soon. Thank you for your patience. If you are looking to give feedback on our new site, please send it along to feedback@globeandmail.com. If you want to write a letter to the editor, please forward to letters@globeandmail.com.
Comments