The budget tabled by the Alberta government Thursday makes two grand bets: that rising oil prices will once again free the province from the horrible fiscal jam in which it finds itself and that the public will support massive debt accumulation until an economic turnaround takes root.

It can't be overstated what enormous gambles both strategies are.

This was the third budget for Premier Rachel Notley's NDP government, and, as expected, it did not deviate much from the bold, if risky, political course she has set for the province. And part of the danger inherent in that direction is the belief the public will accept building up massive levels of debt during a recession to protect key public-sector resources and services.

Explainer: Alberta's budget: Here's what you need to know

Still, for a province that was once synonymous with zero liabilities and enviable rainy-day funds, the numbers are staggering. For the 2017-18 fiscal year, the total debt will be $45-billion, which represents a debt-to-Gross Domestic Product ratio of just more than 14 per cent. By 2019-20, when the next election will be held, that debt is expected to explode to $71-billion – or 19.5 per cent of GDP.

That would put the province beyond the debt levels of neighbouring British Columbia and Saskatchewan, a fact that will provide Ms. Notley's conservative-minded political opponents with no end of ammunition to use against her from now until the next election. Where B.C. just tabled its fifth consecutive balanced budget, the Alberta NDP doesn't anticipate being in the black again until 2024.

The Alberta government will borrow nearly $6.3-billion this upcoming fiscal year just to keep the lights on and $7.8-billion next. It will pay $1.3-billion in debt servicing costs this year and, wait for it, nearly $1-billion more than that a couple of years later.

Oh, how the mighty have fallen.

Scarier, still, is the degree to which the New Democrats are relying on a serious uptick in the price of oil just to sustain the audacious debt numbers they have just placed before the Alberta public.

With oil prices currently hovering below $50 (U.S.) a barrel, the government is forecasting them to average $55 in the upcoming fiscal year, climbing to $68 by 2019-20. The government has budgeted for $2.546-billion (Canadian) in bitumen royalties for 2017-18, a number the New Democrats suggest will grow to $5.269-billion two years out.

But think about this: Every $1-a-barrel drop in the price of oil represents roughly a $130-million loss in revenue to the government. That tells you just how perilous these times are for the province. Unless oil rebounds to the optimistic degree Finance Minister Joe Ceci is projecting, things in Alberta could get uglier than they already are – far, far uglier.

And we haven't even considered what happens if the B.C. New Democrats win election in May, in part on the promise they will shut the Kinder Morgan pipeline expansion down. The Alberta government is already projecting that project, and Enbridge's recently approved Line 3 replacement, will increase the province's GDP by roughly 1.5 per cent by 2022.

One other thing. The budget does not account for any cost increases that might accrue from public-sector settlements currently being negotiated. So, unless these unions agree to zero increases, there will be tens of millions of dollars in added expenses for which the government has not budgeted.

Of course, the nasty economic fundamentals upon which this budget is based are not the fault of the Alberta NDP. Premier Notley didn't ignite the crash in the price of oil or play any role in ensuring those prices stayed low.

One could argue she picked the wrong time to initiate its Climate Leadership Plan (which includes a carbon tax) at a significant cost to the treasury. On the other hand, the NDP could claim Ottawa would never have approved Kinder Morgan without substantial inroads on the environment. (This is assuredly true.)

Both the Opposition Wildrose Party and Progressive Conservatives will both zero in on the debt and deficit numbers in this budget, and understandably so. However, they both have the luxury of not having to outline where they would make cuts to mitigate the amount of debt the province is taking on.

Ultimately, this budget is about ideology as much as anything else. The NDP believes you can spend your way out of a recession, while the government's conservative opposition would contend you should do just the opposite.

Ultimately, voters will decide which approach is right. 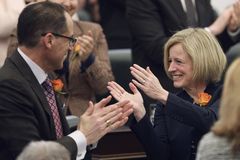