Jason Kenney, the federal member of Parliament gunning to build a new right-leaning party in Alberta, says the province must address carbon emissions to deal with climate change but argues the NDP government's path is misguided.

The politician's alternative plans, by his own admission, are vague. Mr. Kenney this week launched his bid to lead Alberta's Progressive Conservatives with the intention of folding in the Wildrose Party if he wins the nomination contest next March. The MP said he is his holding off on presenting detailed policy because he wants potential members of his proposed third party to have a say.

Mr. Kenney has aligned himself with moderate and left-leaning conservatives in Alberta by acknowledging human activity has contributed to global warming. Wildrose Leader Brian Jean has also said his party believes that humans contribute to climate change, although at least one of his elected colleagues appeared skeptical in the legislature this spring. Danielle Smith, Mr. Jean's predecessor, waffled on the subject, which hurt her party in the 2012 election.

Mr. Kenney, in an interview Thursday, stated his position on greenhouse gas emissions and climate change.

"On the balance of evidence, there appears to be, it appears obvious that there's some [anthropogenic] impact on climate and we should therefore act prudently to seek to reduce GHG emissions," he said.

Premier Rachel Notley imposed a bevy of carbon levies and intends to phase out coal-fired power plants by 2030. The ruling New Democrats argue Alberta must make significant strides to mitigate climate change if it is to win over strident environmentalists opposing pipelines and the energy industry. Mr. Kenney, borrowing a phrase from the Wildrose, calls Ms. Notley's carbon plan a "tax on everything" and ineffective at winning over critics. The policies, he argues, are crushing the provincial economy.

"The key is investing in innovation in environmental technology that reduces the carbon intensity of oil extracted in Canada," he said when asked how he would reduce GHG emissions without damaging Alberta. "Technology is the key that we continue to nudge – both industry and consumers – to reduce their carbon footprint."

Mr. Kenney, who intends to resign from his seat in the House of Commons in October, declined to provide further details.

"I don't want to lock into policy specifics at this stage because we're talking about the prospective policy of a party that does not yet exist." The Calgary Midnapore MP said he will make a speech on climate action in the coming months.

"I don't agree with what he puts forward as [potential solutions], but I think he's got the right mix of 'Yes, it is real, yes, we should act, on it.' "

Mr. Kenney believes the only way to unseat the provincial NDP is to unite the PC and Wildrose parties. The PC leadership race does not officially begin until October and the veteran MP is the only person to have declared his candidacy. To make it work, Mr. Kenney must first win the PC leadership race, persuade the PC and Wildrose parties effectively to dissolve, and then win a second race giving him control over his proposed new party – all before the next provincial election in 2019. Some PC caucus members have already said they do not buy Mr. Kenney's vision. Wildrose MLAs, while officially open to uniting the right, have so far held back on voicing their opinions.

"The way he put it is how I like to think of it: as friends coming together," she said after Mr. Kenney's rally. "If anyone can do it, I believe Jason Kenney can."

Jason Kenney will resign as MP in October in order to unite Alberta
May 16, 2018 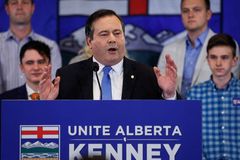 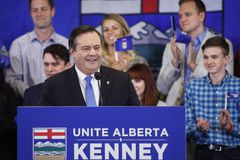 Jason Kenney slammed for remaining an MP as he campaigns in Alberta
May 16, 2018 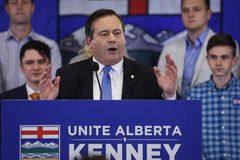