Jason Kenney's pledge to unite Alberta's right-wing divided the province's Progressive Conservatives as the six candidates running to lead the party took the stage together for the first time.

Five of the six candidates at Saturday's leadership forum in Red Deer, Alta., dismissed Mr. Kenney's plan to merge the Tories with the official opposition Wildrose Party, calling it a promised shortcut to power that wouldn't work. The sixth candidate was Mr. Kenney.

"I am proposing one way forward. Not everyone agrees with that, but I believe that what we need to do is listen to Albertans," Mr. Kenney said as he defended the centrepiece of his campaign at the end of the two-hour forum. "Give this a shot."

A former Conservative MP who held high-profile ministerial posts in Ottawa, Mr. Kenney entered the race in July to much fanfare. He announced at the time that he was running because he believed that uniting the two parties was the only way to win the next provincial election in 2019 and end Premier Rachel Notley's time in power.

That campaign proposal was roundly criticized on Saturday evening in front of a sold-out crowd of 1,100.

"It's a slogan, not a plan for the future of this province. We deserve a plan for a party in Alberta that's more than a quest for power," said Sandra Jansen, a Calgary-area MLA seeking the leadership.

"There are no quick fixes," added Richard Starke, another MLA running.

While candidates could not speak directly to each other under the forum's rules, that didn't stop them from directing their comments at Mr. Kenney and his plan. There was a loud mixture of cheers and boos when Calgary lawyer Byron Nelson said the party should be scared of someone like Mr. Kenney coming forward and saying, "Hi, I'm from Ottawa and I'm here to help."

It's been a tragic year for the Alberta Tories. After losing power in May, 2015, one of the party's most high-profile MLAs was killed in a car accident. Then former premier Jim Prentice died last month in an airplane crash.

While Mr. Kenney is calling for a merger of the right-wing, his opponents are looking to rebuild the coalition of centrist voters that elected PC governments for nearly 44 years. That coalition collapsed in 2015 when Mr. Prentice's promise of fiscal restraint and good government ran into a legacy of lavish spending and scandal left by his predecessors. On election night, the left-wing New Democrats won power for the first time and the right-wing Wildrose Party secured its largest seat haul.

The party's path forward remains unclear to many who came to Red Deer. The former MP's campaign flexed its organization muscle for the first time in the campaign, bringing in three buses of youth delegates that helped steer the party toward rejecting a carbon tax during policy decision earlier in the day.

While some in the party wanted to keep the province's new carbon tax and use the increased revenues to lower existing taxes, Mr. Kenney has rejected the economy-wide emissions tax introduced by the NDP. On Saturday, he pledged to cancel the carbon tax and lower Alberta's income taxes.

Mr. Kenney's opponents cried foul over his buses of delegates with day-old membership cards, but he told reporters he was harnessing his campaign's widespread support after a summer-long tour of Alberta.

"I welcome a healthy democratic competition. That's what this is all about," Mr. Kenney said.

Mr. Kenney's supporters also helped defeat a motion that would have prevented party members from holding a membership in another party – an option Mr. Kenney needs if he's going to unite the Tories with the Wildrose.

"There's obviously something afoot here. We need all of us to mobilize the centre," she said. "I think there are people here who haven't held Progressive Conservative memberships for very long. And I think that some of those people have very social conservative values."

The final candidate in the race is former PC cabinet minister Stephen Khan, who joined the field late last week. The party's leadership candidates will hold a debate in January before a leader is elected in March at a delegated convention. 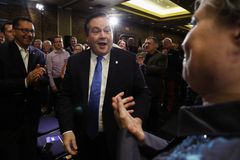 Unite-the-right talks with Alberta PCs would be distracting: Wildrose leader
October 28, 2016
Striving to rebuild after loss, Alberta PCs hold first leadership forum
November 4, 2016
Follow Justin Giovannetti on Twitter @justincgio
Report an error Editorial code of conduct
Due to technical reasons, we have temporarily removed commenting from our articles. We hope to have this fixed soon. Thank you for your patience. If you are looking to give feedback on our new site, please send it along to feedback@globeandmail.com. If you want to write a letter to the editor, please forward to letters@globeandmail.com.
Comments