Dr. Elizabeth Brooks-Lim is Alberta's fourth chief medical examiner in five years. She officially takes the helm Feb. 1, at a time the office faces tighter timelines to complete criminal case work and as the province grapples with a spike in opioid-related deaths.

It's been a tumultuous five years. What are your immediate priorities?

My main priority is to ensure that our office continues to provide services that Albertans require from us. Of course I've been asked: Why would you want to take this position? It's the staff and the people who work here. They are absolutely outstanding, and they deserve to have stability.

I'm just looking forward to leading them to continue doing the work that they have always done throughout this entire time period, regardless of whoever was head of the operation.

Some law enforcement officials have expressed concerns that files are taking longer to close than they perhaps should, putting investigations at risk. How will you address that?

I'm very well aware that yes, particularly criminal case files and ones that are under investigation by the police are a significant concern. We are making sure that those cases are highlighted. We are paying great attention to that.

We are speaking to our working colleagues with the Crown prosecution service and with the police to ensure that, even though we have a heavy workload, that those specific case files, that their prosecution and the way that they go through the courts, are not jeopardized by the timing of how [long] it takes for our reports to come out.

What sort of strain is the office under as a result of opioid-related deaths?

There's a general increase in the number of deaths that we're seeing across the province that come under our jurisdiction. It's just part and parcel of that.

The backlog is occurring with us attempting to try and get to our physical case files to look at all the information or the police intelligence that's gathered, or the medical history that's gathered, putting together all of the complex laboratory findings and creating a robust and sound medical report that we can then hand out to the relative interested parties. And that's where our biggest pressure lies. It's with our medical examiner staff.

As of the end of October, 2016, we had a total of 1,982 completed files, and 1,437 were still incomplete. That's across the whole province. So our staff are working as hard as they can, but they're making sure they aren't just speeding through it to hit a deadline, because every single person who dies in this province that comes through this office deserves that attention.

The Supreme Court's R. v. Jordan decision in July has set caps of 18 months for criminal cases before the Provincial Courts and 30 months for Superior Courts. Does that change how you prioritize cases?

It's a delicate balance. Just because a case file is not suspicious, it doesn't mean that we want to put that at the back of the line. So it's a careful balance of making sure that we reach our case turnaround times as safely as possible with as much attention paid to detail to complete them in a way that means we're not jeopardizing anybody's work.

Will you be seeking additional resources? 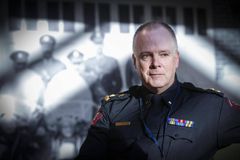 Alberta explores setting up safe sites to reduce fentanyl overdoses
October 27, 2016
Alberta officials warn of carfentanil after opioid tied to two deaths
October 7, 2016
Follow Jeff Lewis on Twitter @jeffalewis
Report an error Editorial code of conduct
Due to technical reasons, we have temporarily removed commenting from our articles. We hope to have this fixed soon. Thank you for your patience. If you are looking to give feedback on our new site, please send it along to feedback@globeandmail.com. If you want to write a letter to the editor, please forward to letters@globeandmail.com.
Comments