Fentanyl-related deaths in Alberta have increased more than 60 per cent this year compared with the same period last year, prompting public-health experts to call for a stronger response from the province.

The dramatic surges in both Alberta and British Columbia also shine a light on provinces such as Ontario, whose delayed data reporting raises questions about just how bad the situation is there.

As well, the province has confirmed 50 deaths linked to the powerful fentanyl analogue carfentanil to date: 29 in 2016 and 21 in just the first quarter of 2017.

"What the latest numbers show me is that, certainly, the problem is not going away," Alberta's chief medical health officer, Karen Grimsrud, said in an interview on Tuesday. "We're still dealing with a significant public-health crisis."

The situation in Alberta parallels what has happened in B.C. Illicit fentanyl is being detected in a large and growing number of overdose deaths and other powerful opioids are gaining a foothold as well. But while B.C. laid the groundwork for various harm-reduction initiatives many years ago, many of Alberta's responses are still relatively new.

Alberta has begun, for example, to increase the distribution of naloxone kits, apply to open supervised-injection sites and collect detailed data on drug overdoses.

From Jan. 1, 2016, to March 31, 2017, the province has distributed more than 15,300 naloxone kits to drug users, at community pharmacies, harm-reduction agencies, treatment programs and elsewhere. There were 1,130 self-reported overdose reversals, though this figure is likely an underestimate as many overdose reversals in the community are not reported.

As well, the application progress has begun for five supervised-injection sites: four in Edmonton and one in Calgary.

A major disparity in the overdose response across Canada has been data collection. While B.C. has fatal-overdose statistics going back 30 years, and fentanyl-detected deaths going back to 2012, Alberta only just began releasing quarterly reports on substance misuse last year.

Meanwhile, Ontario's latest confirmed figures for opioid-related deaths are from 2014; 2015 figures are still considered preliminary. There were at least 710 opioid- or opioid-and-alcohol-related deaths that year – but in B.C., illicit-drug deaths jumped 81 per cent from 2015 to 2016 and are projected to be even higher this year.

However, Alberta does have a few advantages in data reporting. A single health authority with centralized data means health officials can cross-reference provincial health data with physicians' datasets, such as billing data. This has shown, for example, that 62 per cent of people who died from apparent drug overdoses related to an opioid other than fentanyl had opioids dispensed from a community pharmacy within 30 days before their deaths.

"That really provides us with good information as to how we might, in the future, have some kind of interventions," Dr. Grimsrud said. "If you're seeing your pharmacist within 30 days … then maybe we need to work more with pharmacists in order to have them involved in the response."

Elaine Hyshka, an assistant professor in the University of Alberta's School of Public Health and a member of the Access to Medically Supervised Injection Services in Edmonton (AMSISE) coalition, said she would like to see a stronger response from the province.

"We have made some progress, such as scaling up access to naloxone, but that is just one response. We need a co-ordinated effort and, frankly, more resources to support this work," she said.

Globe editorial: How to end Canada’s biggest public health emergency
May 22, 2017
There are children left behind by B.C.’s overdose crisis
November 12, 2017 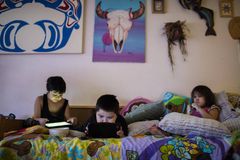 Mayors want national standard on collection, sharing of overdose death data
April 13, 2017
Follow Andrea Woo on Twitter @andreawoo
Report an error Editorial code of conduct
Due to technical reasons, we have temporarily removed commenting from our articles. We hope to have this fixed soon. Thank you for your patience. If you are looking to give feedback on our new site, please send it along to feedback@globeandmail.com. If you want to write a letter to the editor, please forward to letters@globeandmail.com.
Comments