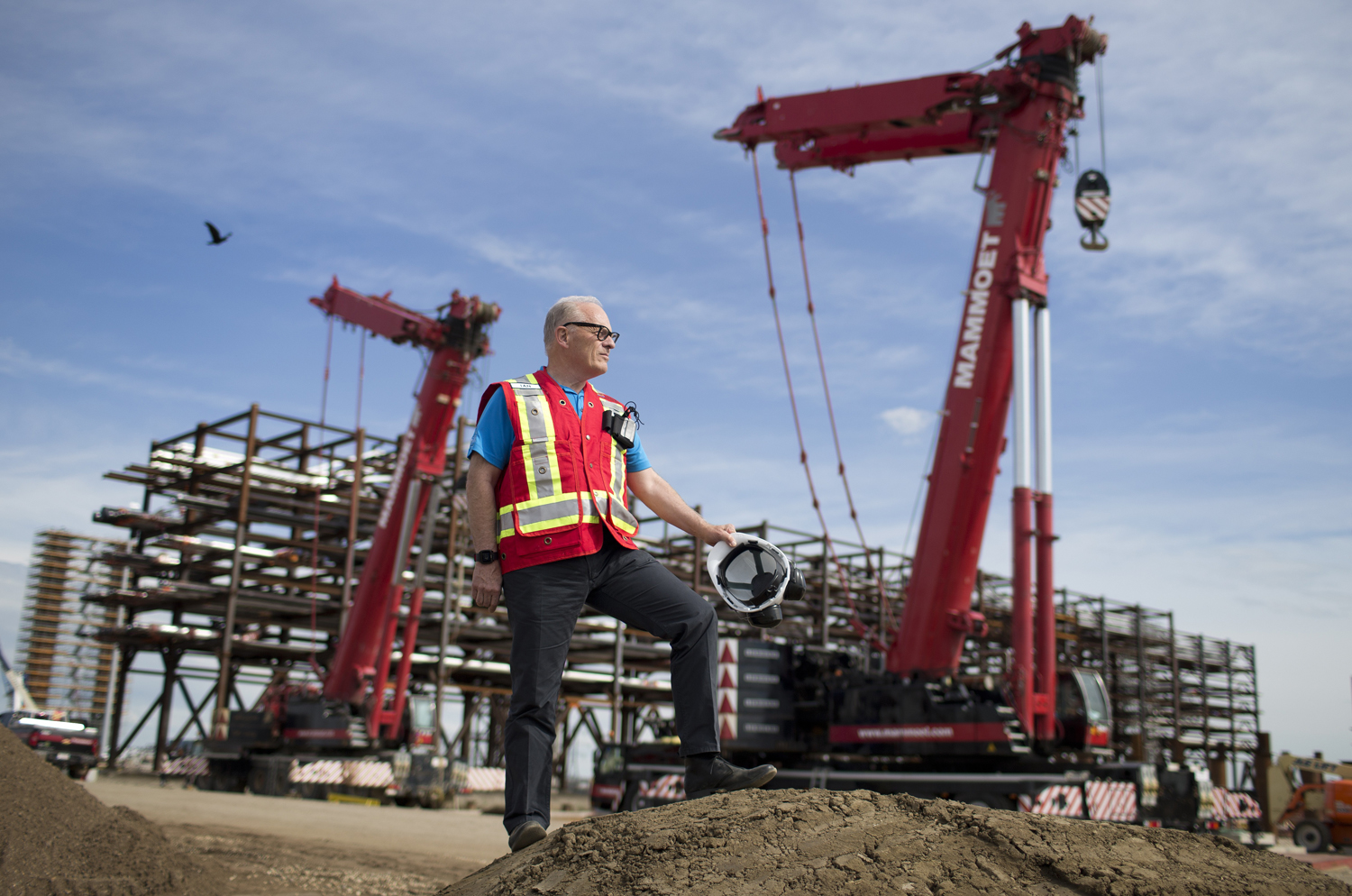 In Redwater, Alta., Canada’s only new refinery since the 1980s is under construction. Some proponents, expecting a production surge, argue more refineries and upgraders would help Canada keep more of its oil wealth here. And where Alberta falters, B.C. hopes to rise with refining projects of its own

FORT MAC
A year-long project about Fort McMurray, Alta., which has come to be the emblem of Canada's energy sector – and all the issues that surround it.
MORE FROM THE PROJECT

It’s a site map for the sprawling complex in Alberta’s oil sands, showing where an array of equipment and tanks would have been located if Suncor hadn’t pulled the plug in the spring of 2013. Suncor cancelled the $11.6-billion upgrader project after investing $3.5-billion on the early construction phases. The oil giant decided upon reflection that it doesn’t make economic sense to construct a new plant to upgrade tar-like bitumen into synthetic light crude.

A four-hour drive south of Fort McMurray, North West Upgrading Inc.’s refinery is under construction near Edmonton. The $8.5-billion project is slated to begin operating in the fall of 2017. The Alberta government backstopped the venture in 2011, clearing the way for North West to break ground in the fall of 2013, just months after Suncor ditched Voyageur.

“There’s a huge transfer of value – taxes, jobs and economic activity – to Texas and other places south. If you don’t care about that, maybe that’s okay. But if you want some schools, hospitals and jobs, you want bitumen processed in Canada,” Mr. MacGregor says as he tours the sprawling construction site near Redwater in Sturgeon County.

The North West Refining site is shown beyond a canola field.

Canada sent almost 1.2 million barrels of unprocessed bitumen a day to the United States last year, or about 60 per cent of daily oil sands production. That production from Alberta is forecast to surge over the next five years. The conventional wisdom among Canadian oil producers is that in the years ahead, increasing market access south of the border and expanding to Asia will be crucial to moving bitumen out of landlocked Alberta.

But in British Columbia, there are high hopes that where Alberta faltered with only one refinery in the works, the West Coast will prevail in producing refined products such as diesel, gasoline and jet fuel.

Exports are the goal of three B.C.-based refining projects. Those proposals are spearheaded by upstarts seeking to send refined products across the Pacific Ocean. Two of the B.C. proposals – Pacific Future Energy and Kitimat Clean – involve building pipelines from Alberta to northwestern British Columbia, where the bitumen would be converted into refined products for export to Asia. Pacific Future Energy is also examining moving crude by rail to its proposed refinery site near Prince Rupert.

A third oil proposal, Eagle Spirit Energy, envisages refining the bitumen into finished products either in Alberta or northeast B.C., before piping them to the West Coast for export.

Some industry officials believe the B.C.-based refining projects are a long shot because proponents need to lure financial backers and find a way to win over First Nations groups. Another challenge is competing against huge Asian refineries in their own backyard.

“If it were economic to have a new refinery, I assure you there would be one,” says Ian Anderson, president of Kinder Morgan Canada, which is proposing to expand its Trans Mountain pipeline from the Edmonton area to Burnaby. Trans Mountain’s existing system carries heavy and light oil, as well as diesel and gasoline

In the early 1990s, there were four oil refineries in the B.C. Lower Mainland. Today, there is only one in the region, operated by Chevron Canada Ltd. 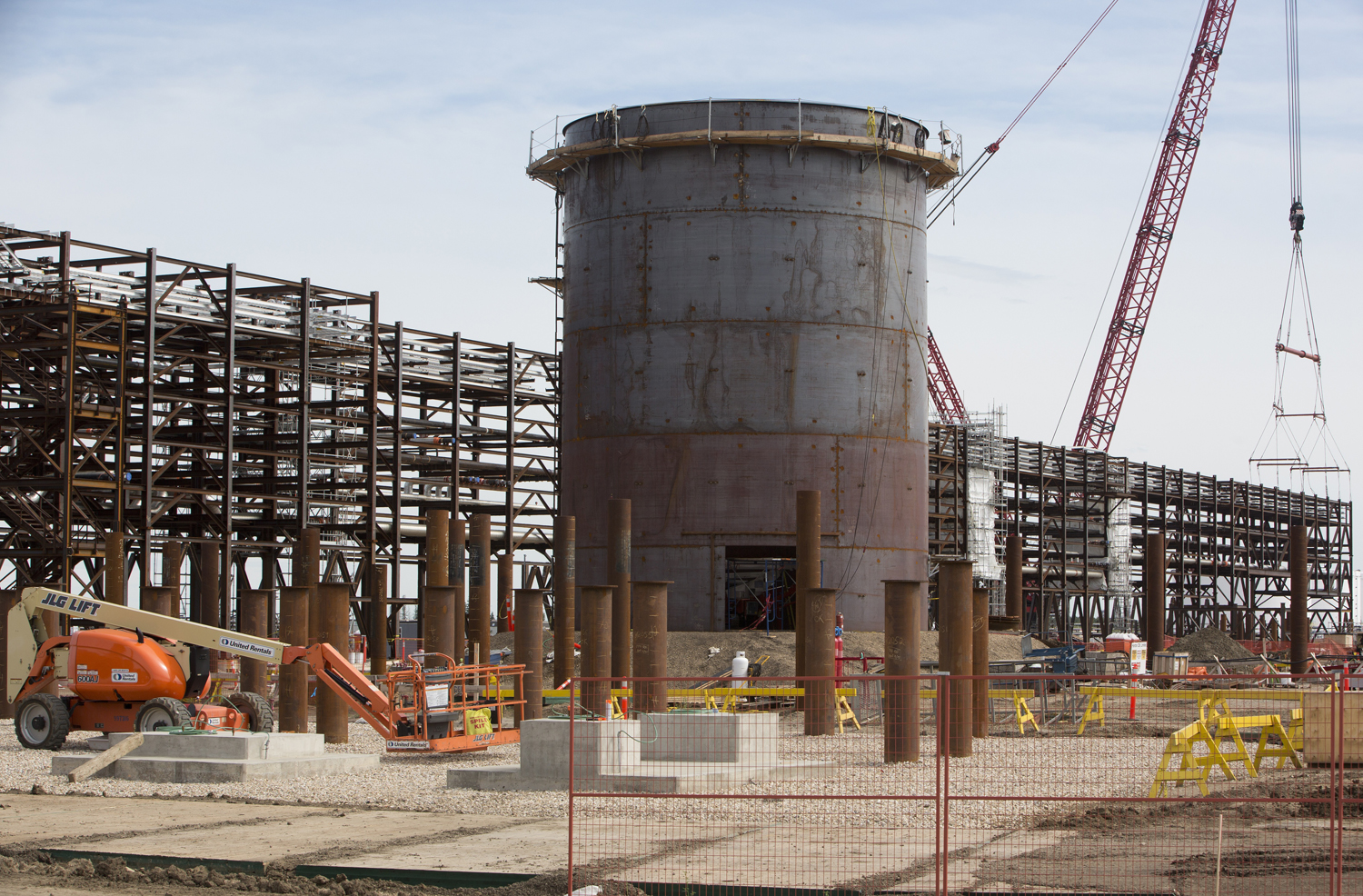 Piping is prepared for the North West refinery.

Still, proponents say their ideas deserve serious consideration. The B.C. players point out that oil pipeline proposals geared toward transporting bitumen have run into fierce opposition, including routes planned for refineries in the United States (Keystone XL) and Asia (Trans Mountain expansion and Northern Gateway). That leaves fewer options for getting bitumen to market.

British Columbia is counting on having a geographic advantage. Being on tidewater, the refineries contemplated by Pacific Future Energy and Kitimat Clean would be easier and cheaper to assemble in B.C. than in Alberta because prefabricated modules would be shipped over from Asia.

Mr. MacGregor argues that more of Alberta’s oil sands bitumen should be kept in Canada for upgrading into synthetic light crude or further processing into refined products. “Many U.S. refineries have expanded their capacity. They say, ‘We want Canadian oil feedstock. Keep sending it.’ But I think Canada needs to build more refineries. The finished product is more valuable. You can’t put bitumen in your car. It would be like putting tar in your tank,” he says.

Judith Dwarkin, chief energy economist at ITG Investment Research, warns that spending billions of dollars to increase refining capacity within Canada is no economic panacea. She notes that North West received big subsidies when the Alberta government agreed to supply 37,500 barrels a day of bitumen to the company and also pay fees for processing. “It isn’t really a commercially-based decision, but is diverting public funds from other uses in order to subsidize the processing of oil,” Ms. Dwarkin says.

Ted Morton, executive fellow at the University of Calgary’s School of Public Policy, issued a study in April that called North West a “boondoggle with high risks for Alberta taxpayers.”

North West will be the first oil refinery to open in Canada since 1984. A North Dakota refinery that opened earlier this year was the first to be built in the United States since 1976. 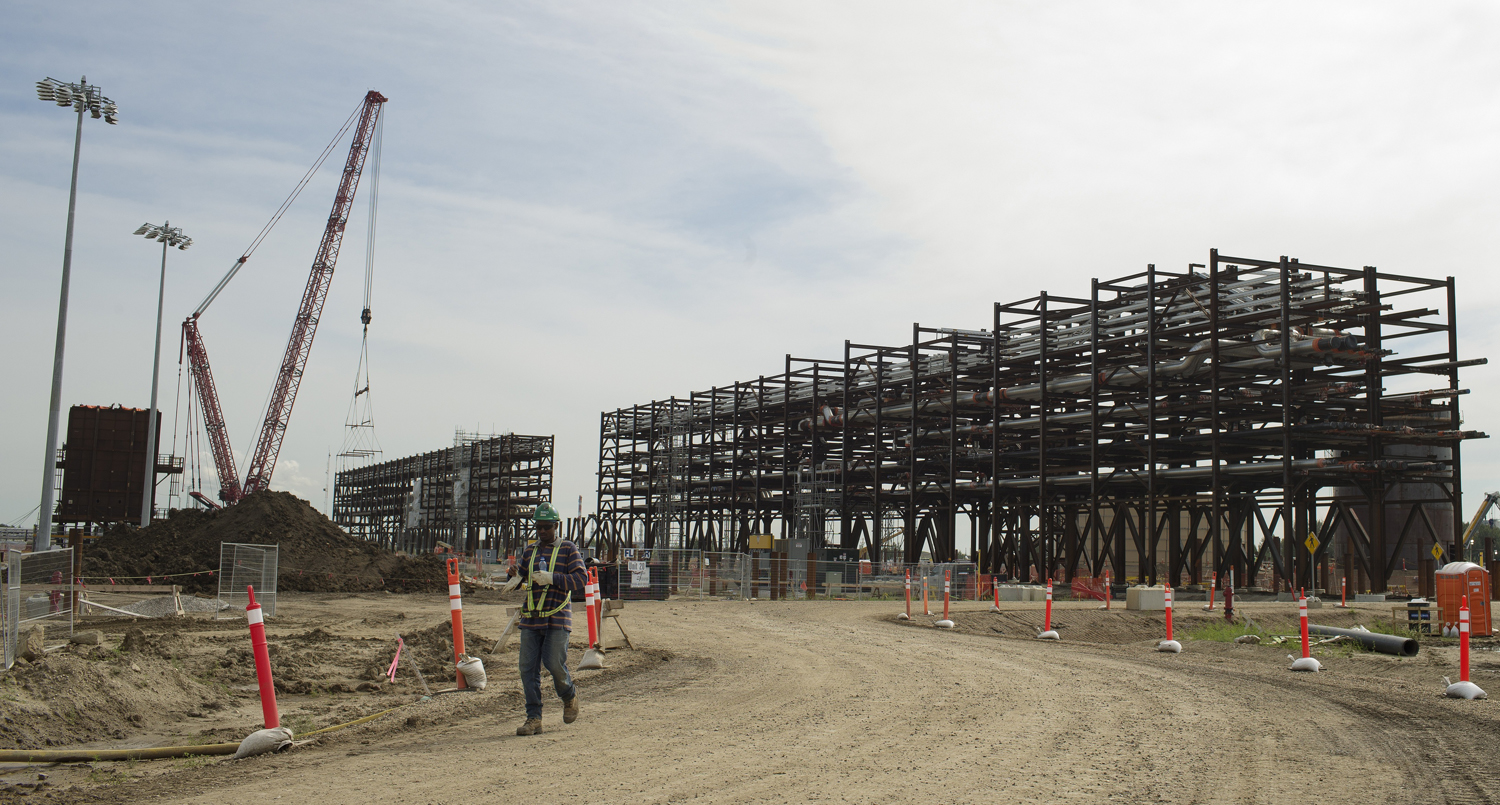 A worker walks by piping for the North West refinery.

North America’s refining industry has proven to be a tough business over the past 40 years as dozens of plants closed. Industry players have chosen to expand existing refineries or make them more efficient instead of building new ones, says Bill Simpkins of the Canadian Fuels Association, which represents the refining sector.

Suncor is a supporter of TransCanada Corp.’s controversial Energy East pipeline project, which proposes to take unprocessed bitumen from Alberta to New Brunswick for export. Some of the raw commodity could potentially be processed at Suncor’s Montreal refinery if that plant gets retrofitted to handle diluted bitumen.

Cenovus Energy Inc., which jointly owns two U.S. refineries, is among the Canadian companies keen on sending bitumen into the United States. Cenovus and other producers also want to sell the raw commodity to customers in Asia.

But with low oil prices, some North American refineries are thriving after years of facing thin profit margins.

Stockwell Day, the former leader of the Canadian Alliance, is Pacific Future Energy’s advisory board chairman. He argues that exporting refined products would pose a substantially lower risk to the environment than a tanker spilling bitumen into the ocean.

Despite the skeptics, Mr. Day envisages a new era for the oil sands – valued-added activity that creates more jobs and generates economic spinoffs: “Why ship the jobs and prosperity out of Canada?”

REFINERIES AND UPGRADERS IN CANADA

There are five upgraders in Alberta, as well as one in Lloydminster, Sask., operated by Husky that also refines oil into diesel. Of the 16 operating refineries in Canada, there are eight in the West, including the Lloydminster Husky upgrader, and eight in the East. North West Upgrading Inc.’s joint venture with Canadian Natural Resources Ltd. is the lone refinery under construction in Canada.

What upgraders do: Upgrade tar-like bitumen from the oil sands into synthetic light crude, which in turn is further processed at refineries into finished petroleum products.

What refineries make: Refined products such as gasoline, diesel and jet fuel.

One refinery in Canada under construction: North West Upgrading Inc.’s joint venture with Canadian Natural Resources Ltd. near Redwater, Alta. (Despite the name, North West will produce refined products such as diesel.)

Exports to U.S.: U.S. refineries are major buyers of Canadian oil. For example, Calgary-based Cenovus Energy Inc. sells much of its production into the U.S. market, where it has two jointly-owned refineries (one in Texas and the other in Illinois) that have significant capacity to process Canadian heavy oil.

Pioneers: Suncor Energy Inc. and Syncrude Canada Ltd. are the two pioneers in the the oil sands. Suncor has been in the upgrading business since 1967 at its main property near Fort McMurray while Syncrude began operating in 1978.

Major producers in the energy industry want to increase shipments of bitumen instead of building costly new refineries to handle a forecast surge in oil sands production in the years ahead. While the U.S. has been the traditional market for Canadian oil exports, producers are also turning their sights to customers in Asia to expand to new global markets. Here are five controversial oil pipeline plans:

Kinder Morgan Canada Inc.’s Trans Mountain: Plans to expand the pipeline from Alberta’s Strathcona County to Burnaby, B.C., would increase the number of oil tanker shipments from Vancouver’s Burrard Inlet to 34 a month from five.

TransCanada Corp.’s Keystone XL: The proposed route from Alberta to Nebraska has been a lightning rod for U.S. climate change activists opposed to the oil sands and faced political opposition in Washington.

TransCanada Corp.’s Energy East: The project would improve market access from the West to two Quebec refineries and also be a boost for Irving Oil Ltd.’s Saint John refinery and potential oil exports from New Brunswick. Suncor Energy Inc. could benefit if it adds a coker (used to process heavy oil such as bitumen) at its Montreal refinery. The Alberta bitumen would displace imported oil at the Montreal refinery.

Enbridge Inc.’s reversal of Line 9B: While the four proposals listed above face major obstacles, testing on Line 9B is expected to done by the end of this year to clear the way for light oil to flow from Ontario to Quebec.