On opening day in July, 1980, Alberta's Culture Minister flipped a switch and a laser cut through the red ribbon. Edmonton's new science park was considered a "jewel" of the city's beloved river valley park system, reports said. Everything about the new centre was meant to serve as a celebration of Alberta's prowess, with octagonal structures that evoked a bright future and the latest in push-button exhibits, all meant to enrapture groups of shiny-eyed students.

After decades of efforts, the Strathcona Science Provincial Park opened to great fanfare at a time when Alberta was flush with oil money and looking to build lasting monuments. Money was diverted from the province's savings fund to build a centre that proponents argued would captivate young minds and teach them about the science, technology and industry coming out of Alberta.

Today, the pavilion is shuttered, the pavement cracked, and the signs faded and graffiti-covered, and it's hard to believe the park was once meant to be Alberta's response to the Ontario Science Centre. It was the victim of budget cuts in the late 1980s, and as Premier Rachel Notley and the provincial NDP government tackle a yawning budget deficit, the abandoned centre is a reminder of the once-rosy promises dashed by the province's boom-and-bust economy.

Only eight years after it opened, the science park was abandoned in 1988. Alberta was suffering from its first major oil crash of the modern era. The heady days of former premier Peter Lougheed had given way to the harsh reality faced by then-premier Don Getty, and the province was looking for ways to save money. The six science pavilions were shut down, a public archeological dig was suspended and special bus service was ended.

Ms. Notley and the provincial NDP government are now in a similar position, forecasting a budget deficit next year that could go as high as $6.5-billion. Alberta's conservative opposition parties have called for austerity, and Ms. Notley has promised that some low-priority programs could face the axe.

The province, however, is working on a new plan for the park, and the area will revert back to a more natural state, according to Terry Krause, regional planner for Alberta Parks. That plan will erase the last traces of the park's original dedication to science.

The bluff on which the science park still sits – overlooking the North Saskatchewan River and providing a picturesque view of the provincial capital's skyline – is a layer cake of Alberta's history, with an industrial landfill, an abandoned coal mine and a wealth of First Nations artifacts below. Decay pervades in what was once a $30-million gamble. All but one of the octagonal structures in the park have been torn down, and there's little indication that this 270-acre site squeezed between Edmonton and refinery row in neighbouring Strathcona County is a provincial park, let alone one dedicated to science. The facility is now considered a debacle from a free-spending time in Alberta's history and an oddity in the provincial park system.

"It is a mysterious place. You get there and you wonder why it's in that condition," said Mr. Krause of the current state of the provincial park. "It's a huge anomaly. Alberta Parks doesn't go out and take over landfill sites. We got left holding the bag when the budget cuts came through in the late 1980s."

A boardwalk was built around a functioning archeological site that included five active digs. At the time, a local newspaper story called this "Alberta's golden age of archeology." During the centre's operations, more than 1,000 stone chips, tools and projectile points would be unearthed. A special bridge was also built over the adjacent river, allowing buses to access the museum directly – the bridge is now part of the city's system of cycling trails.

The centre itself was divided into the six structures, called pods. In each building, patrons could visit an orientation centre, as well as exhibits on air and water, land use, forestry, renewable energy and non-renewable resources. According to internal government documents from 1974, Alberta's goal initially was to build a rival to the then five-year-old Ontario Science Centre. However, ambitions were scaled back before the park's opening in 1980.

Throughout his career at Alberta Parks, Mr. Krause has always regarded the abandoned science centre as a peculiar place. "When I'm on the ground there I think, 'Oh dear, what do we do with this.' Despite that, some people really love it," he said.

It's so close to the city that it could be easily confused for a city park, and it strays far from the public body's mandate of protecting the province's environmental diversity. "This is by no means your typical provincial park. Three departments were involved: culture for the history; education for the schools; and parks," Mr. Krause said. "It was built in the boom times when there were buckets of money. Someone in education must have been pushing because of the archeology focus. They threw a lot of money at it and built something, but there wasn't enough money to maintain it and it crashed."

The science park was the brainchild of John Ashton, a two-term MLA in the 1970s. "With the benefit of hindsight, I would say those buildings were a mistake," he told the Edmonton Journal in 1999. "This was done in the mid-70s when government spending was quite different."

Today, much of the science centre's history is lost. The local county directed all questions to the provincial government. Alberta Parks could provide little beyond the barest of details; without an official history, the failed science centre has exposed how much the department relies on individuals for institutional memory, Mr. Krause says. Thanks to documents in the City of Edmonton's archive, The Globe and Mail was able to reconstruct some of the park's history and what it looked like in its heyday.

A ski hill built as part of the original park has prospered. Opened the first winter the park was in operation, the ski hill had 150-metre-long runs and three T-bars. At the time, a full-day pass for an adult was $6. The hill is now privately operated, and owner Ian Bakker doesn't remember much about the science centre. But he said he'll never forget when he first got to the hill he now operates.

"The first day we came out here in '88, there were guys in white haz-mat suits in the field across the parking lot doing testing," he said. "We thought that was odd. We were driving in and these guys in white suits were testing. It wasn't a great sign."

After the science centre was opened, a large area had to be razed and capped with clay after tests showed that toxic groundwater was running off into a nearby river at a rate of five litres per hour. To this day, the rule at the park is to add dirt and never to dig. With the coal mine and industrial dump below, no one knows what they could find.

"I always choke when I talk about what happened," Mr. Krause said of the park. "It's hard to explain." 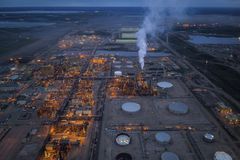