Sarah Hoffman was at a junior high school in northern Alberta when Ralph Klein's government made deep cuts to the province's school system. Conversations at the family dinner table soon turned political and she remembers the night when her dad, a school principal, decided to take every other light bulb out of his school to save money.

"It was tough. He didn't want the kids to be in a school that wasn't well lit, but he didn't want to lay off another educational assistant," she said. As Alberta faces another budget crunch, the experience will guide her thinking.

Ms. Hoffman stepped down as chair of the Edmonton school board in January to run as a New Democrat in Edmonton-Glenora when the party seemed likely to pick up a few seats in Alberta's capital city. She had previously served as NDP research director.

During the second week of the election campaign, NDP Leader Rachel Notley arrived at Ms. Hoffman's campaign office and, while greeting staff, held Ms. Hoffman's left hand in the air and exclaimed: "My future minister of education."

Ms. Hoffman says she hasn't spoken about a cabinet post with the premier-designate yet.

After years leading the fight against the privatization of health care in Alberta, David Eggen can now breathe a small sigh of relief. As recently as election night on May 5 he was still worried the Progressive Conservatives had designs on doing away with more of the province's public health system.

"Not any more. We definitely beat them real good this time," he says with a laugh. He served as NDP house leader before the election, and as one of the party's four incumbents he's expected to find a senior role in cabinet.

First elected in a working-class area of northwest Edmonton in 2004, he narrowly lost re-election in 2008. Mr. Eggen soon found work as the executive director of Alberta's Friends of Medicare, a group opposed to health-care privatization.

"We pushed back against private health care. During that fight I came to realize that Albertans aren't so right-wing at all. People have strong beliefs in the value of public health care, education and infrastructure," he said.

In 2012, he won back his old seat of Edmonton-Calder. Before entering politics he was a public school teacher for nearly 20 years.

A medical oncologist by training who teaches at the University of Alberta, Dr. Turner – or simply Dr. Bob to most of his colleagues – says many people in his riding were impressed by Ms. Notley and just wanted to throw out the government.

"A lot of my friends in teaching and health care wanted to see an end to the Conservative government," he said.

"Mr. Mandel has great name recognition in this city; I'm just grateful I was along for the ride on Rachel's coattails."

Dr. Turner moved to Edmonton 38 years ago and joined the Alberta NDP under the leadership of Ms. Notley's father, Grant Notley. An involvement with medical politics through the Alberta Medical Association convinced Mr. Turner of the need to run for the provincial legislature.

"The Alberta Medical Association motto is 'Patient First.' I'd like to bring that to health care; for too long we've worried just about budgets," he said.

The longest serving New Democrat MLA in Alberta history, Brian Mason was leader of the party until last October and may be the steadiest hand in caucus besides Ms. Notley.

Holding his seat since 2000, Mr. Mason helped coach Ms. Notley through her first days in the legislature and has effectively heckled the government during Question Period – a skill the incoming premier never mastered. Going into the 2015 election, he was preparing for a final term.

"My retirement isn't really turning out the way I'd planned, no," deadpans the MLA for Edmonton-Highlands-Norwood. "We'll see what happens; there's now the burden of governing. That might account for what you perceive as my lack of enthusiasm."

He says he's taking the challenge ahead of him seriously. The first thing on his agenda is tackling the province's structural deficit. He's also thinking about the need for guidance and mentoring, now that the NDP has 50 MLAs who have never served in provincial politics before.

Born and raised in Calgary, he drove a city bus in Edmonton for most of the 1980s. "It really gives you a glimpse into the lives and challenges of people from all walks of life."

While the core of the new NDP government will come from the 19 seats it swept in Edmonton, the party captured constituencies across the province. One of Ms. Notley's new lieutenants could be Shannon Phillips, the new MLA for Lethbridge-West.

As a policy analyst for the Alberta Federation of Labour, Ms. Phillips studied some of the most pressing economic issues in the province. She steered the federation's opposition to the Northern Gateway pipeline. She was a supporter of Enbridge's Line 9B proposal.

"We intervened in favour of it because it established east-west connections, energy security for Canada and import substitutions for eastern Canada," she says.

While some in Calgary's office towers worry the NDP's pledge to increase corporate taxes could lead to a loss in jobs, Ms. Phillips says she has seen first-hand what too much economic intervention can do.

"I was a child of the National Energy Program. My dad lost his job as an electrician on an oil rig and I have memories of him staying home with us as my mother patched together contracts," she says.

Who's who in the Alberta orange wave

Experience: Former teacher who won his seat in the 2012 provincial election

Education: BEd, U of A

Experience: Won his seat in 2012 provincial election, Edmonton public teacher from 1990 to 2004

Education: Studied at U of A

Education: Bachelor of arts, U of A; law degree, Osgoode Hall Law School

Education: BA and master's degree in educational policy studies, U of A

Experience: President of Boyle & District Chamber of Commerce and director of the Boyle District Agricultural Society

Experience: Board member of United Nurses of Alberta, workplace representative for Foothills nurses

Experience: Previously worked in the oil and gas industry

Photos from her Facebook have been criticized as inappropriate for an elected MLA, and a petition for her to step down is circulating online.

Employment: Research representative at the Canadian Union of Public Employees, previously worked as a flight attendant

Experience: Worked as a union organizer

Experience: NDP candidate in the October, 2014, Calgary-West provincial by-election and for Calgary-North West in the 2012 provincial election.

Education: BSc, University of Victoria; master's degree, U of C

She defeated 22-year incumbent Moe Amery by 1,500 votes. Her grandfather ran against Grant Notley for NDP party leadership in the 1960s.

Education: Master's degree in social work, U of C

Education: Studying political science at the University of Ottawa

Experience: Worked in Manitoba NDP MP Niki Ashton's office, nominated to run for the NDP seat in Calgary-Midnapore in the 2015 federal election

Employment: Business and IT analyst

Education: BA, University of Azad Jammu and Kashmir; master's degree in social work, U of C; JD, U of C

Employment: Lawyer at a firm specializing in aboriginal law

Experience: Volunteer at Calgary Legal Guidance and worked at a homeless shelter

Experience: Ran for an MLA seat for Banff-Cochrane in 2012 and ran for Cochrane town council in 2013

Experience: Ran as the NDP candidate in Calgary-Elbow in the 2014 by-election

Education: Bachelor of education, U of A; master's degree in administration and leadership, San Diego State University

Experience: Ran for the provincial NDP in 1997

Experience: Member of the Alberta Union of Provincial Employees

Unseated Liberal MLA Laurie Blakeman, who had held the riding since 1997

Education: BA, U of A

Employment: President of the U of A's non-academic staff association

Experience: Ran for NDP leadership in 2014, regional vice-president in Edmonton for the Alberta NDP

Education: Master's in educational policy studies, U of A

Experience: NDP candidate in Edmonton-Gold Bar in the 2012 provincial election

Education: BA, U of A

He won the riding once held by former Alberta Liberal leader Raj Sherman, who did not seek re-election.

Education: Master's of education, U of A

Employment: University facilitator at the U of A, supports student teachers

Experience: Ran as the NDP candidate for Edmonton-Mill Woods in the 2008 provincial election

Education: BA, U of A; bachelor and master of social work, U of C

Experience: Sits on the board of Public Interest Alberta

Employment: U of C faculty of social work instructor in the Edmonton division

Education: Second-year computer science student, U of A

Experience: Ran for the Students' Union executive position at the U of A in 2014

Education: MD, McGill University; trained in internal medicine at Royal Victoria Hospital, trained in hematology and medical oncology at the University of Pittsburgh

Employment: Worked in corrections for 30 years

Experience: Advocated for the No Drilling Lethbridge campaign

Education: BA and MA, U of A

Experience: Worked as a political staffer for provincial and federal NDP

Education: MBA, U of C

Employment: Mediator, former commissioner of public services with the City of Medicine Hat

Experience: Ran as an NDP candidate in Medicine Hat in the 1993 provincial election

Experience: Served on board of directors for the Special Olympics in Kindersley, Sask.

Experience: Ran as an NDP candidate in the 2012 provincial election

Education: Bachelor's and master's degrees in engineering from University of Western Ontario

Experience: Advocate for women in science 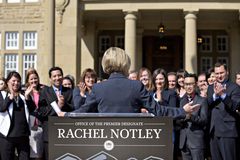 A note for Rachel Notley: A carbon tax is not political suicide
May 15, 2015