A week before Albertans cast their ballots, Progressive Conservative Leader Jim Prentice is in the unusual position of going on the attack against the New Democrats as a large number of undecided voters could still swing the election any way.

During the nearly 44 years the Tories have held power, successive premiers have found themselves in campaigns where more conservative parties have challenged them. But now, Mr. Prentice is facing an extraordinary test as the NDP and the Wildrose Party pull away both progressive and conservative voters.

Mr. Prentice has not held the lead in a number of polls since the election campaign began in early April. Since a televised debate on Thursday, Rachel Notley's NDP has been polling ahead of the Wildrose and Tories.

It wasn't expected to be this way. After only six months as premier, Mr. Prentice called a general election a year before Alberta's fixed-election date. He was holding 70 of the legislature's 87 seats at the time. For weeks, Mr. Prentice had said this campaign would be about securing a mandate for his program of tax increases, modest austerity and record deficits.

Talk of the Tory fiscal plan has now taken the back seat as Mr. Prentice has declared that "Alberta is not an NDP province." The PC Leader has also warned repeatedly since the debate that the left-leaning NDP would wreck Alberta's energy-dependent economy through a program that includes a two-percentage-point increase in corporate taxes and a royalty review.

The NDP position on pipelines has also come under attack. Ms. Notley has not been a strong proponent of the construction of the Keystone XL pipeline to the U.S. Gulf Coast or the Northern Gateway pipeline through British Columbia. Both projects have been stalled for years, facing mass protest and lingering environmental questions.

Ms. Notley has said that as premier she would be "realistic" about the long-stalled projects and would concentrate on advocating for the construction of the Energy East pipeline, linking Alberta with refineries and export terminals in Eastern Canada.

"This underscores the fact that what we are seeing from the NDP is a philosophy that is not focused on the creation of jobs and investment in this province," Mr. Prentice said at a campaign event on Monday morning, adding that he "will fight for every single pipeline project."

With NDP candidates reporting enthusiastic crowds in places where the party hasn't won a seat in decades, opposition parties have said Mr. Prentice is using tactics of fear and trying to create a modern red scare in the province.

"They're talking about us and trying to scare voters about the possibility of an NDP government. It's fear mongering."

PC spokesman Mike Storeshaw would not comment on why Mr. Prentice's message has shifted away from his spending plan. "All I can say about our strategy is that it includes not discussing our strategy in the media."

In the 2012 campaign, the PCs were behind in the polls as Danielle Smith seemed poised to lead the Wildrose to victory. However, in the past few days of the election, voters returned to the Tories after a strong attempt by then PC leader Alison Redford to woo back progressive voters and paint the Wildrose as too extreme.

Mr. Prentice is still trying to take a middle-of-the-road approach, telling Albertans the NDP will increase taxes too much while the Wildrose will cut too much, according to Chaldeans Mensah, a political science professor at Edmonton's MacEwan University. "He needs to be the Goldilocks man."

Scare tactics are a standard strategy for the PC party, according to Jeff Callaway, the former president of the Wildrose. Now running as a candidate for the party in Calgary, Mr. Callaway says Mr. Prentice's attacks on the NDP only disguise how closely his policies are to those advocated by the New Democrats.

"You've got one arguing about how to max our credit card and the other complaining about blowing the Christmas bonus," he said. "It's the axis of taxes, with only shades of red ink separating the PCs and the NDP." 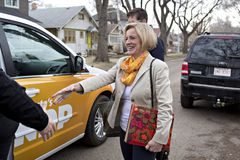 Prentice under attack from left and right during TV debate
April 23, 2015 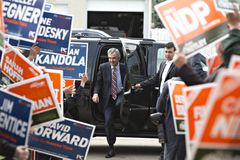 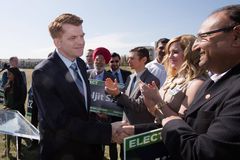