Canadian officials are bumping up the salaries of South African firefighters in Alberta because of concerns that the workers could be seen as "slave labour," their South African manager says.

Three hundred South African firefighters arrived in Edmonton on Sunday night and flew to Fort McMurray on Wednesday to begin battling a wildfire that now covers about 5,800 square kilometres.

When a smaller number of South African firefighters worked in Alberta and British Columbia last year, they each got about $1,500 a month in daily allowances and expenses, according to Llewellyn Pillay, managing director of Working on Fire, the South African organization that trains and employs the firefighters.

That amount, set by Working on Fire, seemed fair to the South African firefighters – whose normal local salary is one-tenth of that level – but it sparked concerns from Canadian agencies at the end of their deployment last year. Some B.C. Wildfire Service officials, for example, felt it would be inappropriate to use them again given the low wages.

This year, Mr. Pillay said, their salaries will be increased to about $15 to $21 an hour, as a result of an intervention by the Canadian Interagency Forest Fire Centre (CIFFC), which co-ordinates the operations of visiting firefighters.

"The last thing we want to do is to be perceived as providing slave labour," he said in an interview Wednesday. "We have to respect our colleagues in Canada. We're not about undercutting Canadians or providing cheap labour. We're not there to take away people's jobs."

CIFFC director Kim Connors would not disclose how much the South African firefighters were paid last year, or how much they are being paid this year. However, he confirmed there were concerns from the federal centre, and the B.C. and Alberta wildfire agencies, about the rate last year being too low, followed by a joint agreement to give them "a little increase" this year.

"We had a dialogue and said, 'Let's make sure that these firefighters are being compensated appropriately,'" he said.

Asked if this year's rate is comparable to what Canadian firefighters are paid, Mr. Connors said he didn't believe that it was.

"The only thing to come up last year was that we felt that their salaries are so low, they're a long way from home, here's an opportunity: You could increase their salaries a little bit while they're here, but [not so much] that it upsets their economic balance there."

Within Canada, wildfire crews tasked with fighting fires in other provinces receive what they normally would in their home province – typically in the range of $21 to $26 an hour, with overtime, working 12 hours a day on average. As part of a Canada-wide agreement, receiving agencies then reimburse lending agencies from within the country a flat rate of $575 per firefighter per day.

Outside of Canada, lending agencies set their own rates and it's up to the receiving agency to determine whether to accept the help.

The South African firefighting program is unique in that it is a government-funded project to provide jobs to unemployed young people and its normal pay in South Africa is below the minimum wage.

Last year, the organization simply charged an amount that covered its costs and an estimate of a fair allowance to the South Africans based on their local standards, Mr. Pillay said. The firefighters were grateful for the experience of working in Canada and they weren't worried about the pay levels, he said.

But at the end of the mission, Mr. Pillay said the CIFFC told him: "You can't charge the South African rate. It has to be fair and equitable from a Canadian standard."

"It opened our eyes," Mr. Pillay said. "It's a much more ethical way of doing it. It's the right way to operate, morally. We had never thought about it – we were just happy to have the chance to go to Canada. Now we realize we can't assume that South Africa's rates are at parity."

The Alberta Union of Provincial Employees, which represents more than 350 members who fight forest fires, "believes strongly that all workers, regardless of country of origin, should receive equal pay for equal work," according to a statement provided by communications co-ordinator Tyler Bedford. "The foreign forest firefighters here to help should be paid on par with their counterparts."

Despite their humble roots in rural communities, the South African firefighters are skilled and professional, and have been praised by the CIFFC for their physical fitness and productivity. In Alberta, they will be doing "laborious, intensive work" digging up and extinguishing hot spots, Alberta Wildfire spokesman Travis Fairweather said.

The work in Canada is a life-changing experience for the South Africans, most of whom have never before been on an airplane and have never travelled outside their home country, Mr. Pillay said. Last year, with the help of the money they earned in Canada, many of the South Africans were able to build houses, start their own businesses, get driver's licences or take educational courses.

The 300 South Africans make up the largest group ever brought into Canada at one time to fight wildfires.

300 South African firefighters are trained and headed to Fort McMurray
May 28, 2016 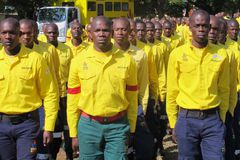 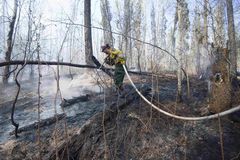 Emergency measures stave off wildfire damage to B.C. oil and gas patch
May 26, 2016 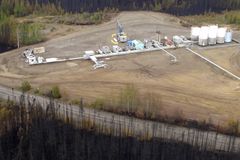 Follow Geoffrey York and Andrea Woo on Twitter @geoffreyyork @andreawoo
Report an error Editorial code of conduct
Due to technical reasons, we have temporarily removed commenting from our articles. We hope to have this fixed soon. Thank you for your patience. If you are looking to give feedback on our new site, please send it along to feedback@globeandmail.com. If you want to write a letter to the editor, please forward to letters@globeandmail.com.
Comments