Mandel collected 66 per cent of the vote Tuesday on the first round of voting on a preferential ballot, defeating Calgary legislature member Rick Fraser and energy lawyer Kara Levis.

Mandel said the goal now is nothing less than forming government in the 2019 election.

"We're here to earn your vote in every single Alberta community and to be the first choice for government in the next election.

"Winning in 2019 means winning the hearts and minds of Albertans in every corner of our province."

Mandel captured 3,045 of the 4,613 votes cast online or by phone by party members over the last three days.

It's the third go-round in politics for Mandel, 72.

He was mayor of Edmonton for about a decade, ending in 2013, overseeing the revitalization of the downtown, including a new arena for the Edmonton Oilers.

He then moved to provincial politics, serving as health minister in the previous Progressive Conservative government but was voted out, along with the party, in the 2015 win by Premier Rachel Notley's NDP.

Mandel inherits a party which has three members in the legislature but won just two per cent of the popular vote in 2015.

The leadership vote was called after current leader Greg Clark announced in November he was stepping down.

The race jump-started membership. The party had just 1,024 members late last year, but now has more than 6,500.

In the 2012 election, it ran 38 candidates but polled just 1.3 per cent of the vote and got shut out. In 2015, it ran three fewer candidates and polled 2.2 per cent, but did manage to elect Clark in Calgary Elbow.

"We must significantly ramp up our efforts in fundraising, candidate recruitment and, most importantly, building constituency associations."

The caucus has grown due to floor-crossings.

NDP backbencher Karen McPherson joined last October and Fraser left the United Conservatives last month to sign up for the party and the leadership race.

A new board of directors has been in place since November, with representatives from across the province. 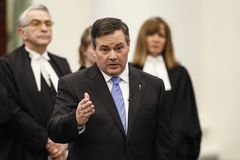