"Two individuals who I have admired from a distance today have joined the Progressive Conservative caucus," Mr. Prentice, flanked by Ms. Towle and Ian Donovan, told a legislature news conference on Monday.

"I'm pleased and humbled by their support. I've admired the work ethic and the integrity of both of these individuals."

Mr. Prentice said his caucus had voted unanimously to admit the pair. He said he did not promise them anything or entice them to cross the floor.

The two rookie members of the legislature looked downcast during the news conference, with Ms. Towle on the verge of tears.

Ms. Towle, the member for Innisfail-Sylvan Lake, had quickly become a key lieutenant to Wildrose Leader Danielle Smith and a sharp critic of the Tories on social policy and the treatment of seniors.

She said she had been weighing her decision for more than a week and decided on Sunday it was time to go.

"It's incredibly difficult. I consider most of my caucus mates my friends, but I felt I had done all that I could in the role I was in," she said.

Ms. Towle said she has been dismayed by the route the Wildrose was taking.

"We are a party of free votes, however, our membership was deciding how I as an MLA was expected to vote, and that caused me great conflict," she said.

"My constituents were coming to me asking me to give this government and Mr. Prentice a chance, and felt I could do more with them than against them – and I heard that message."

Mr. Donovan said his constituents in Little Bow also told him to look at joining Mr. Prentice, and he listened.

"I'm impressed with the new leadership," he said. "For my constituents, I think I can do the best from the inside, making decisions around the table with the governing party."

Mr. Donovan said he was disillusioned with Ms. Smith, who said recently if Wildrose does not win the 2016 election, she will quit as leader. "I respect Danielle Smith to the utmost, [but] it's hard to follow somebody when they say they're not sure they're going to lead the team if they don't win the next game," he said.

Ms. Towle and Mr. Donovan will take their places on the government side of the legislature chamber on Tuesday.

The PCs now have 63 members in the 87-seat legislature. There are 14 Wildrose members, five Liberals, four NDP and one Independent.

Monday's announcement was the latest body blow to a party that has been on the ropes since it lost four by-elections to the Tories on Oct. 27. The by-election losses set off a cascading train wreck of changes and decisions.

Ms. Smith and her team were blamed for pursuing the wrong strategy in the by-elections, trying to paint Prentice with the same brush of scandal as former premier Alison Redford.

In response, Ms. Smith shook up her communications and political staff. Caucus member Joe Anglin then quit ahead of being fired by the caucus. Ms. Smith accused Mr. Anglin of undermining caucus for a year by secretly taping them.

Mr. Anglin denied it, and Ms. Smith admitted she had no proof.

Things worsened at the Wildrose annual general meeting 10 days ago. Smith, in her keynote speech, accused the media of slanting its reporting to build the narrative of a negative, angry Wildrose party.

A day later, Ms. Smith was out of the room when party members voted to reject putting into policy a statement they passed a year earlier promising to respect the rights of minority groups, including gays and lesbians.

While Ms. Smith said the party still endorses fairness for all, the vote re-ignited simmering criticism that the rural-based party is bigoted and anti-gay. 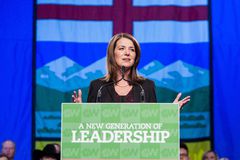 Alberta Premier Prentice vows to keep Tories on track after ‘darkest days’
May 12, 2018 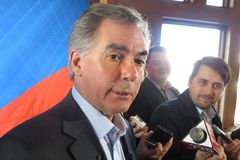 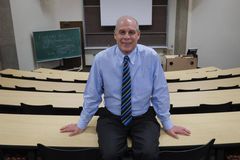