Alberta's new Opposition leader has officially been sworn in during a ceremony at the provincial legislature.

Jason Kenney, leader of the United Conservative Party, won a by-election last month to become the legislature member for the constituency of Calgary Lougheed.

Kenney, a former federal cabinet minister, won the leadership of Alberta's Progressive Conservatives in early 2017. He successfully arranged a merger with the Opposition Wildrose and then beat its leader, Brian Jean, to become head of the new party.

Kenney will take his seat in the legislature when the spring sitting begins on March 8.

"In a few weeks time, when I take my seat and my place, it will be to act as leader of (the official Opposition) and I hope ... to do so in a constructive fashion," he said at the swearing-in ceremony Monday.

Afterwards, Kenney gave a stump-style speech to his supporters at a downtown Edmonton hotel. He criticized the federal carbon tax, pledged to work hard for "common-sense solutions" and committed to raise the bar on discourse in the legislature.

Kenney left without taking questions from the media. 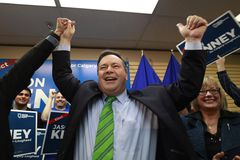 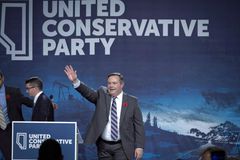 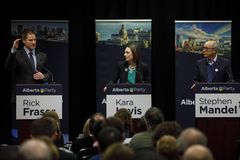