Alberta Wildrose and Progressive Conservative members have overwhelmingly voted in favour of a merger between the two parties, a development that creates a consolidated, right-of-centre threat to Premier Rachel Notley's NDP government.

At more than 95-per-cent support, the Wildrose party vote easily exceeded a 75-per-cent threshold that was seen as the main hurdle to the two parties uniting. As expected, the question also passed with the Alberta PCs led by former federal cabinet minister Jason Kenney – also with 95 per cent of members voting in favour. The Yes vote immediately set off what will be a hotly contested leadership race for the new party that will culminate in a vote on Oct. 28.

The decisive size of the pro-unity vote marks a significant shift on Alberta's political scene ahead of the provincial election in 2019. The Wildrose and PC parties harbour numerous old grudges against one another, and the strong vote in favour of unity is an indication of the size of small-c conservative discontent with the province's two-year-old NDP government – which took office in a period of oil-price lows and a slumping Alberta economy.

Both opposition parties have criticized mounting provincial deficits. The move to introduce a carbon tax this year – and the alliance between Alberta's NDP government and the federal Liberals on climate issues – has especially inflamed and rallied the province's conservatives.

"I've seen the desperation in peoples' eyes as they watch every level of government work against them – whether it's the NDP in Edmonton, or Trudeau in Ottawa," said Wildrose Leader Brian Jean in a speech following the vote results, in which he promised to "rip up" the carbon levy.

"Together we will send a message to all of Canada that Alberta is done apologizing for our industries and our way of life," he said to loud applause.

The vote is also a significant political victory for Mr. Kenney, who was still sitting as a Conservative MP last July when he declared his intention to quit federal politics to run for Alberta's PC leadership, and find a way to merge the party with Wildrose.

"We need to learn from the mistakes of the past, and both parties have made mistakes in the past," Mr. Kenney said in Calgary Saturday evening after the results came out.

"Let's learn from those lessons but let's not be stuck in the past."

Many PC party members still are wary of a merger, believing the Wildrose is too far to the political right. At the same time, Wildrose members believe the PC party was "entitled," and justifiably booted from office after 44 years in government in 2015.

The new party will face numerous challenges beyond potential internal strife, including charges from the NDP that members are "extreme" on social and fiscal issues, and a nascent movement of political centrists – many of them disgruntled PC party members.

But most conservatives in Alberta believe the merger is necessary to defeat the government in the next election. In the 2015 provincial election that brought Ms. Notley's party to power, the NDP won 41 per cent of the popular vote. But the two right-of-centre parties collectively took more than 50 per cent of the vote – the Wildrose got 24 per cent and the PCs got 28 per cent.

Documents will be filed to Elections Alberta, and new United Conservative Party could be a formal entity by Monday. That afternoon, MLAs from both the Wildrose and PC parties will meet in Edmonton as a united caucus to choose an interim leader. Mr. Kenney said MLAs from both parties will immediately ask the legislature speaker to recognize them as members of the United Conservative caucus. The two legacy parties, as they are known, will cease to be operational.

Although the vote was resounding, the outcome of the unity vote was never assumed. Boosters of unity been emboldened by growth in membership sales in both parties this year that they said was a clear display of support for the merger.

But the Wildrose constitution requires that any major change be approved by more than three-quarters of members. Supporters of unity were confident they had the support of a majority from the 43,000 party member eligible to vote, but weren't as sure they would get to 75 per cent. In the end, 57 per cent of eligible Wildrose voters cast a ballot – 23,466 in favour, and 1,132 against. The PCs got 55-per-cent turnout from more than 50,000 eligible members.

Multiple political stories played out at the Wildrose party meeting Saturday evening. Mr. Jean's speech to a crowd of about 300 was a victory chant for the unity vote, his sign-off as Wildrose leader, and a stump speech for his upcoming leadership campaign.

"I need to step down so we can rise up together and take back our province," he said.

Calgary lawyer Doug Schweitzer also said he will be a part of the leadership race, and Wildrose MLA Derek Fildebrandt is considering a run.

On Saturday night, Mr. Fildebrandt – who has worked to portray himself as a flag bearer for the right flank of the party – said he still hasn't decided whether he will run. But rejecting any further explanation, he said he will not support Mr. Jean.

"That's the one decision I've made in the leadership race – that's not something I'll be doing."

Last December, Mr. Fildebrandt broke ranks with Mr. Jean and spoke openly about a merger with the Progressive Conservatives. At that time, Mr. Jean was talking about the two parties co-operating rather than officially merging.

Wildrose voting scheduled between 8 a.m. and 4 p.m. Mountain time Saturday had been marred by confusion over the pin codes required to vote online. Some party members had received two or more pins; some had received none. Party officials were left scrambling late Friday and early Saturday to get pins to members, and to sort out the confusion. On Twitter, some members complained of long waits on help phone lines.

Wildrose party president Jeff Callaway said the pin problem affected at least hundreds of party members. He said this was caused as a result of such issues such as address changes, addresses entered incorrectly, and shared e-mail addresses.

He said the results remain legitimate, as a credentials committee is making sure any vote that comes as a result of a second pin will be invalidated.

Alberta Conservative and Wildrose vote on merger proposal
July 21, 2017
For politicians, the Calgary Stampede is a lesson in western attire
July 7, 2017 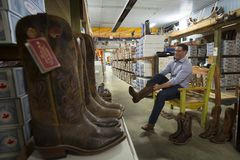 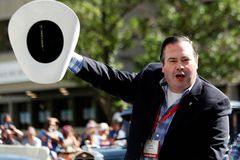