As the only son of famed First World War ace Billy Bishop, Arthur Bishop often struggled to escape the shadow his father cast over his life. While Mr. Bishop admired and even revered his father, he was annoyed by any special treatment he received because of that relationship. In his 2002 autobiography, Winged Combat: My Story As a Spitfire Pilot in WWII, he cites writer John Updike: "Being born of fame is not like earning it. You have to create your own worth in other coin; you have to escape history's shadow and get, as they say, a life."

Arthur Bishop certainly tried, and seemed to succeed, in getting a life, as he first became a fighter pilot with the elite Royal Canadian Air Force 401 Squadron; then he discovered his talents as a writer, an advertising executive and later an entrepreneur. His daughter Diana says: "He believed everything was possible."

William Arthur Christian Avery Bishop was born June 13, 1923, to William (Billy) Bishop and Margaret Eaton Burden. A daughter, Marise, was born several years later. Arthur's godfather was Prince Arthur, Duke of Connaught; his godmother was Princess Louise, cousin to Queen Mary. In spite of these illustrious connections, in Winged Combat Arthur quipped: "I would rather have had the money."

The Bishop finances were in a precarious state after the crash of 1929, when Billy Bishop lost most of his savings. The family returned to Canada from Britain when Billy became vice-president of the McColl-Frontenac Oil Co. in Montreal.

While the senior Bishop established himself in Montreal, Arthur, Marise (known as Jackie) and his mother stayed for a time with her family in Toronto and spent the summer at Ravenscrag, the Eaton family cottage on Lake Rosseau in Muskoka. It was a charmed life for a youngster. Arthur first flew in an airplane when he was 10; after, he flew often with his father. "I had utter confidence in my father. I was beginning to think of him as many others did – as invincible," he wrote.

With war looming, Billy Bishop was appointed honorary air vice-marshal of the Royal Canadian Air Force in 1938. His task was to woo public support to raise money for air-force expansion. His son proved an eager recruit.

Arthur had been sent to boarding school at Bishop's College in Lennoxville, Que. He was an indifferent student but his father arranged a week at the RCAF Central Flying Training School for the 15-year-old and a friend. It was his first experience with the RCAF. He recalled "a tingling sensation of being witness to something exciting in which I might one day take part."

In 1941, while Arthur was home for Christmas, he met Priscilla (Cilla) Jean Aylen, daughter of prominent Ottawa lawyer John Aylen. Arthur was immediately smitten and a courtship (of sorts) would unfold over the next four years as the two dated others and war intervened.

Although comparisons with his father would be inevitable and often exasperating, Arthur was determined to forge his own path. But it was not easy. In June of 1941, he turned 18. He was eager to join the RCAF, but in order to do so, had to get his junior matriculation, which seemed unattainable. But later that summer the RCAF lowered the education qualifications.

On Sept. 8, 1941, Arthur joined the RCAF but would not make his first solo flight until 1942. "I remember my first solo effort as if it were yesterday; I felt as though I'd been given gossamer wings," he wrote. He was proud of his achievements in the air, but on the ground the lessons were much harder to absorb and made all the more difficult when he realized his father was receiving reports about his progress.

"As I learned from one of the ground instructors over many beers one night in the canteen, my father had been making inquiries. Because of my poor academic record … he wasn't allowing any chance of my flunking out in the service. It was only one of many times that he would be looking over my shoulder."

However, there were plenty of opportunities for a young cadet to have fun. After Arthur was transferred to Uplands Air Base, near Ottawa, he would occasionally buzz the city to annoy his mother if she were working in her garden. "... I would fly over and pull the propeller pitch lever back from fine to coarse so that she could enjoy the awful screeching howl it would make. When I asked her if she could hear it, she'd chastise, 'Of course I can hear the damn thing. Why don't you take your toy and go and play somewhere else?'"

On July 30, 1942, Arthur received his wings from his father. Cilla told him that when vice-marshal Bishop learned his son was to receive his commission and be sent overseas as a fighter pilot, "He was so proud he sat down with tears in his eyes."

Mr. Bishop was posted to the 401 Squadron as a Spitfire pilot. To him, the Spitfire was the perfect flying machine, with its elegant, elliptical shape and manoeuvrability in the air.

But while there were glamour, drink and girls on the ground, the reality of aerial combat was terrifying. In a 1995 interview, Mr. Bishop remembered: "My worst moment in the war was probably the first time we went into action together as a squadron. …You're flying in formation but when you spot something, it's every man for himself. You're suddenly on your own. All I could see were planes flying left and right, because until you get acclimatized to what's going on, it's absolute confusion."

In the same interview, he recalled one of the occasions he was shot down. It was during the invasion of Normandy in 1944. "I wasn't really supposed to be flying. I'd had three sauternes but no lunch at the mess when somebody said we were one pilot short. As it turned out, I was on our side of the line when I came down, but just. The rations in the escape kit were supposed to last for a month, but I ate them in about 15 minutes, I was so damn hungry."

After nearly two years and hundreds of missions, Mr. Bishop's health began to suffer. He needed a rest. He was going home. His first reaction was hurt but gradually, as the news sunk in, he realized he was glad to be going home. "I was never one to deny that I was afraid, even at times scared out of my wits – who wasn't? That was only human. I was proud that somehow I had been able to live with that, even if I was not entirely able to overcome it."

With the war behind him, he became engaged to Priscilla and on Nov. 3, 1946, they were married in Ottawa. They had two children, Diana and William.

Mr. Bishop started his professional life as a reporter for the Windsor Star and discovered that not only did he enjoy writing, he wanted to tell the stories of war veterans and began to gather individual stories of heroism, which later became a book, Unsung Courage.

In 1946, he became an advertising executive at the Ronalds Advertising Agency in Montreal, but left to form his own public-relations firm, PPS Publicity, in partnership with his wife.

On Sept. 11, 1956, Billy Bishop died in Palm Beach, Fla. The funeral in Toronto was the largest military funeral ever held in Canada. Billy had wanted Arthur to write his biography. Courage of the Early Morning appeared in 1965. It was a bestseller and the source for the evergreen play Billy Bishop Goes to War. Arthur Bishop went on to write many more books on Canada's military heroes.

Diana Bishop reflected on what it must have been like for her father to be the son of a famous man in the foreword to Winged Combat: "My father followed in his father's footsteps as a fighter pilot, right into another war. It couldn't have been easy, and I often wondered whether he constantly had to seek his father's approval, and whether he was always trying to measure up."

She added: "He is often asked whether he considers himself a war hero, a question that seems always to embarrass him. … 'Not a war hero,' he says, 'a survivor.'"

Arthur Bishop was predeceased by his wife, Priscilla, in 2001. He leaves his sister Margaret Marise (Jackie) Willis-O'Connor, his children Diana and William, and his grandchildren.

Billy Bishop's son on board with airport renaming
September 3, 2009 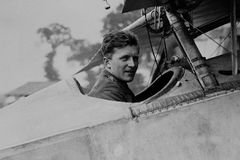