A Vancouver-based HIV/AIDS pioneer could soon see Canada back his internationally recognized HIV treatment – but only with the ouster of the Conservative government, which for nearly a decade has rebuffed his calls.

Last week, Julio Montaner, director of B.C.'s Centre for Excellence in HIV/AIDS, wrote a letter to the leaders of Canada's federal parties urging them to endorse an ambitious global target to help end the AIDS epidemic. Meeting the "90-90-90" target by 2020 "will lead to a 90 per cent reduction in the global burden of HIV/AIDS by 2030," he wrote.

United Nations Secretary-General Ban Ki-moon has embraced the target; the UN General Assembly on Sunday adopted it as the strategy for the global control of HIV/AIDS. Numerous countries, including the United States, China, South Africa, France and Spain, have already signed on.

The Globe and Mail reached out to the federal Conservative, NDP, Liberal and Green parties, seeking responses to Dr. Montaner's letter. Green Party Leader Elizabeth May said she has spoken in favour of the treatment model in the House of Commons and has on her MP website a petition she helped design and deliver that calls for the immediate implementation of a national AIDS strategy based on it.

"We are totally in favour of these goals," Ms. May said in an e-mail.

Victoria NDP candidate Murray Rankin said the New Democrats support the 90-90-90 target and criticized the Conservative government for its "lack of leadership on this critical global health issue."

"We should be supporting the ground-breaking work from the leaders in our own community," Mr. Rankin said in an e-mail. "Given this is a public-health issue in Canada that touches far too many, the government needs to work with the provinces to adopt the targets domestically, ensuring treatment for HIV/AIDS is accessible, and prevention is a priority across the country."

The Conservative Party said it "has been supportive of the principles behind" the new target, but "we cannot lose sight of the continued importance of primary prevention." The statement also said that Canada "is a founding partner and a leading donor to the Global Fund to fight AIDS, tuberculosis and malaria."

The party did not respond to a followup question on how it has been supportive of 90-90-90 principles.

Dr. Montaner, who feels the Conservative government's stance is rooted in ideology, said its stated focus on preventing transmission – through its support of the Canadian HIV Vaccine Initiative, for example – neglects those who are already infected.

"We cannot leave them behind, as this would be an ethical travesty, morally unacceptable," he said. "The end of AIDS will not be achieved unless we address the underlying determinants of health that drive the epidemic particularly among the most at-risk and hard-to-reach populations. The inability of the federal government to overcome its prejudices has hampered our ability to expand services to those most at need in Canada."

The Liberal Party had not responded as of Tuesday. However, Dr. Montaner said Leader Justin Trudeau spoke favourably of his work during a tour of the doctor's Vancouver office this year. Mr. Trudeau has also expressed support for Insite, the supervised injection site in Vancouver's Downtown Eastside that has reduced HIV risk behaviour by curbing needle-sharing and promoting safer sex practices.

"I have every expectation that anybody but a renewed Conservative party would represent a shot in the arm for this strategy, both domestically and internationally," Dr. Montaner said. "And not just for 90-90-90, but to remove some of the obstacles that need to be removed, to ensure that those that are most affected – First Nations, commercial sex workers, injection drug users – can have meaningful access to health care and social services."

It is born from the Dr. Montaner's treatment-as-prevention (TasP) strategy, which consists of widespread HIV testing and the immediate offer of highly active antiretroviral therapy to those who test positive. This treatment has been shown to virtually eliminate progression of the disease to AIDS and to reduce transmission of the virus by 96 per cent.

Dr. Montaner has written to the federal government about TasP every year since it was introduced in 2006; B.C. remains the lone province in Canada to formally adopt it.

B.C. doctor urges federal parties to back AIDS-treatment target
May 15, 2018 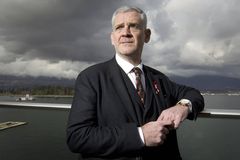 Life expectancy of HIV-positive Canadians rises to 65 years: study
May 15, 2018

B.C. HIV/AIDS pioneer to be honoured by Canadian Medical Hall of Fame
May 12, 2018