It is a true story, one worth repeating since it starts like a well-worn joke: A co-founder of a Canadian Football League franchise walks into a bar with the team mascot, a lamb dyed orange and black – B.C. Lions colours. The man orders a double whisky for himself and a double mint sauce for the lamb. The barkeep tells them to get out. "Well," said the man, "I guess they only serve lamb in the dining room."

That 1955 incident at Kelowna's Royal Anne Hotel was witnessed by onlookers, reported as fact and retold with great gusto after Victor Spencer died Aug. 20 at the age of 90. A co-founder of the football Lions, the indefatigable Mr. Spencer was always keen to highlight his hometown of Vancouver.

He helped bring the 1954 British Empire and Commonwealth Games (now known as the Commonwealth Games) to Vancouver, which prompted the construction of the 32,300-seat Empire Stadium and ultimately led to the Lions' acceptance into the Western Interprovincial Football Union (WIFU), which was later dubbed the West Division of the Canadian Football League. He also played a prominent role in lobbying for the 1955 Grey Cup game to be played in Vancouver.

Those who knew him best said he had two great loves in his life: his family and the Lions.

"It was hard to define our father because he did so many things. He was a multifaceted diamond in the rough," his daughter Janice Spencer said. "Dad was a self-defined people person who met people easily and enjoyed being social at any opportunity, whether it be over coffee or at an event. … But his eyes would light up when he spoke of football."

At various times in his life, Mr. Spencer was a Second World War naval officer, a pro football player who played for free one season, a prosperous businessman and the guy who took an orange-painted lamb into a bar. Why? Because his team needed comic relief from its strict regimen of two workouts a day, and Mr. Spencer thought a mascot lamb would provide that.

"It's a classic story," said author Alan Watson, who is working on a book titled Victor Spencer's Roar in '54. "Victor borrowed a lamb from a young girl and her father, then paid them off with free tickets to a Lions home game. He wanted to have some fun."

Mr. Spencer's family wealth came from a successful chain of B.C. department stores called Spencer's. His grandfather David Spencer, a Welsh immigrant, founded his first dry goods shop in Victoria in 1873. He did well and went on to open new locations throughout the province. The nine stores were sold to Eaton's in 1948 for $14-million.

Victor Vance Spencer, born in Vancouver on Nov. 21, 1924, was one of seven children of Joseph Victor Norman Spencer and the former Gertrude Isabel Winch. Known as the Colonel, his father had fought in the Boer War and the First World War. Victor attended Toronto's Upper Canada College, where he was captain of the football team. He was also required to participate in boxing. The training served him well when he subsequently competed as a prize fighter. He left UCC in his senior year to enlist in the Royal Canadian Navy as an underage ordinary seaman.

Mr. Spencer served aboard the HMCS Dauphin, a corvette that was zigzagging across the frigid North Atlantic to ferry supplies. He would later tell the story of how he was swept overboard one day while on de-icing duty. He was saved when another wave swept him back alongside the ship, enabling him to grab hold of the vessel's guardrail. He was discharged at the end of the war with the rank of lieutenant.

When he returned to Canada, he signed on to play with the Hamilton Tigers of the Ontario Rugby Football Union, while also working for Eaton's. His football salary was $50 a game, but he told team officials to keep the money since he was already well paid by Eaton's.

Mr. Spencer often travelled to B.C. for the family business, where he met Margaret Anne Elvin Airth, an illustrator in the advertising department of David Spencer Ltd. The two fell in love and married in June, 1951. They went on to have three children.

Meanwhile, he began his dogged pursuit of a pro football team, enabled by some fellow businessmen. Their commitment was put to the test early. In 1951, the WIFU consisted of four teams – Calgary, Edmonton, Saskatchewan and Winnipeg. It granted Vancouver a provisional franchise providing it could sell 6,500 season tickets.

Mr. Spencer attended the 1952 WIFU meetings and extolled the virtues of a new stadium in a hungry market ready to cheer on its team. The Stampeders backed the Lions right from the start, but Winnipeg fought to keep Vancouver out: Vancouver was too far to travel and its citizens supposedly loved rugby and soccer, not three-down football. That notion was punted, however, when 8,000 people signed up for season tickets. Calgary, Edmonton and Saskatchewan voted in favour of Vancouver while Winnipeg abstained. The Vancouver team was named after the province's mountain lions. To ensure the football Lions had no claws, their rivals refused to hold a dispersal draft. Little wonder the team that took to the field in the summer of 1954 was long on enthusiasm but short on talent.

"The team won only one game that season," Mr. Watson said. "But when the Lions did win their first game [at home against Calgary], the fans tore the goal posts down then conga-danced all the way to downtown."

Mr. Spencer's love for the Lions knew no end. His daughter Janice recalled how her dad had a car dealership detail the family's 1957 black convertible Oldsmobile with orange pinstriping and "two large orange paw prints on the trunk of his car." His children attended home games, mingling with guests and enjoying the run of the stadium.

The team's popularity struck a note with a young Lui Passaglia, who was born the same year the team was founded and went on to play a record 25 seasons with the Lions. He grew up six blocks from Empire Stadium and when he heard the crowd roar, he knew something good had happened for his beloved Lions.

"I played there in high school and when I was at Simon Fraser University," Mr. Passaglia recalled. "But best of all was being a Lion coming out of the tunnel and running on to the [Empire] field with everyone cheering. That was special."

There was another special moment for the Lions and their home-grown place-kicker. It came in the 1994 Grey Cup, when the Lions hosted the Baltimore CFLers at BC Place. On a last play, 38-yard field goal attempt, Mr. Passaglia made the kick that won the Lions their first Grey Cup victory on home turf. For that, he was named the game's most outstanding Canadian.

When his playing career ended, Mr. Passaglia accepted a job as the team's director of community relations. That was when the former kicker got to know the man most responsible for the CFL coming to B.C. "When I saw Vic at games or at events, he always had a smile on his face," said Mr. Passaglia. "The team was like one of his kids."

Scott Ackles shared that belief. As the son of Lions' general manager Bob Ackles, he would watch the team practise and play. One afternoon, the two were at a practice when they spotted Mr. Spencer standing on the sidelines.

"My dad said, 'See that man over there?' " Scott Ackles remembered. "Then he told me, 'If it wasn't for him, we wouldn't be standing on this football field right now.' "

For all he achieved, Mr. Spencer was added to the B.C. Lions Wall of Fame in 2002, then named to the Canadian Football Hall of Fame as a builder four years later. Legendary Vancouver sports writer Jim Taylor gave the induction speech and told the story of how Mr. Spencer ended up in a Kelowna bar with a lamb for a mascot.

"What really made it funny was he had the lamb propped up on a bar stool," said Mr. Taylor, who acknowledged that "the odd glass [of alcohol] was lifted" in this wooly caper.

Mr. Spencer leaves his children, Janice Spencer, Andrea Hunter, Victor Spencer III; grandchildren, Victor IV, David, Michael and Paloma; great-granddaughter, Phoenix; sister, Diana Dyer; sister-in-law Isabelle Loveless; and many nieces and nephews. He was predeceased by his wife of 62 years, Peggy, who died in March, 2014, and five of his siblings.

A celebration of his life will be held Oct. 4 at the Capilano Golf and Country Club in West Vancouver. 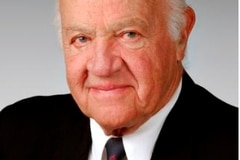