<span class="redactor-invisible-space"> <p> The Brexit referendum: How it happened, and what happened next </p>

What it means for Canada 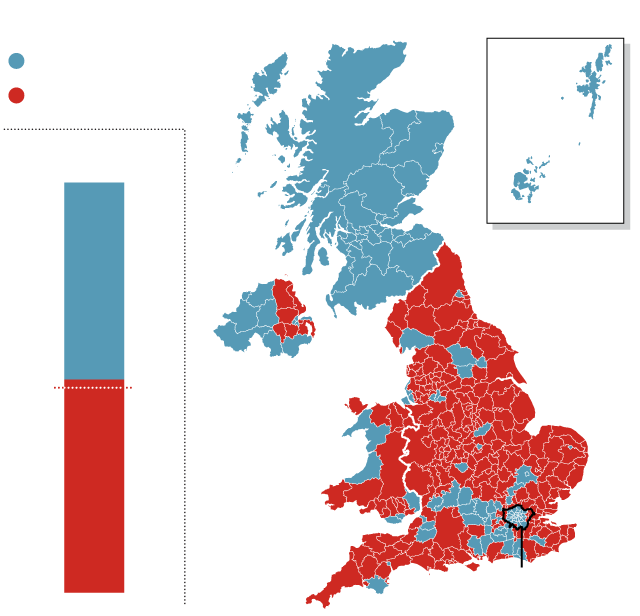 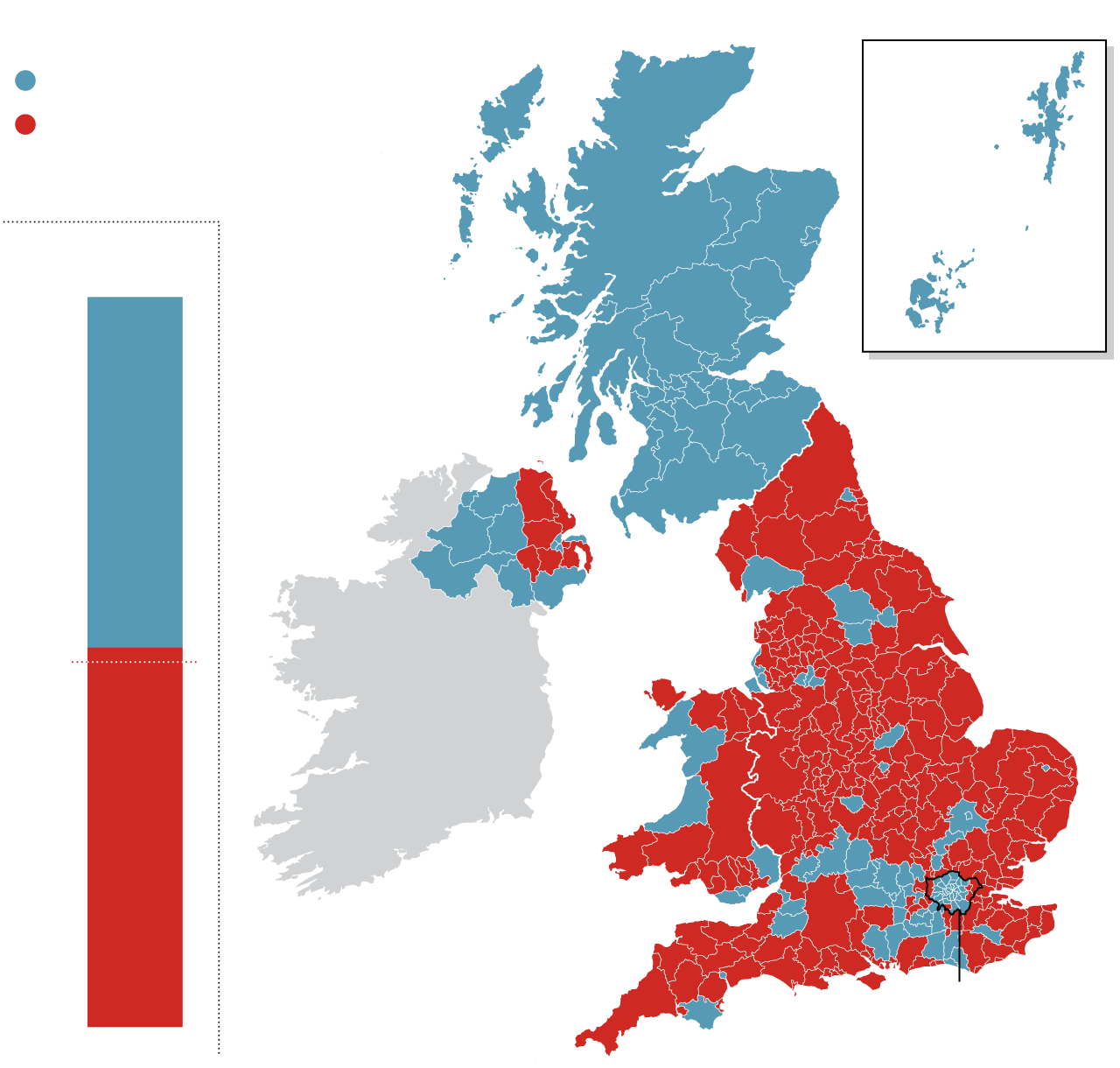 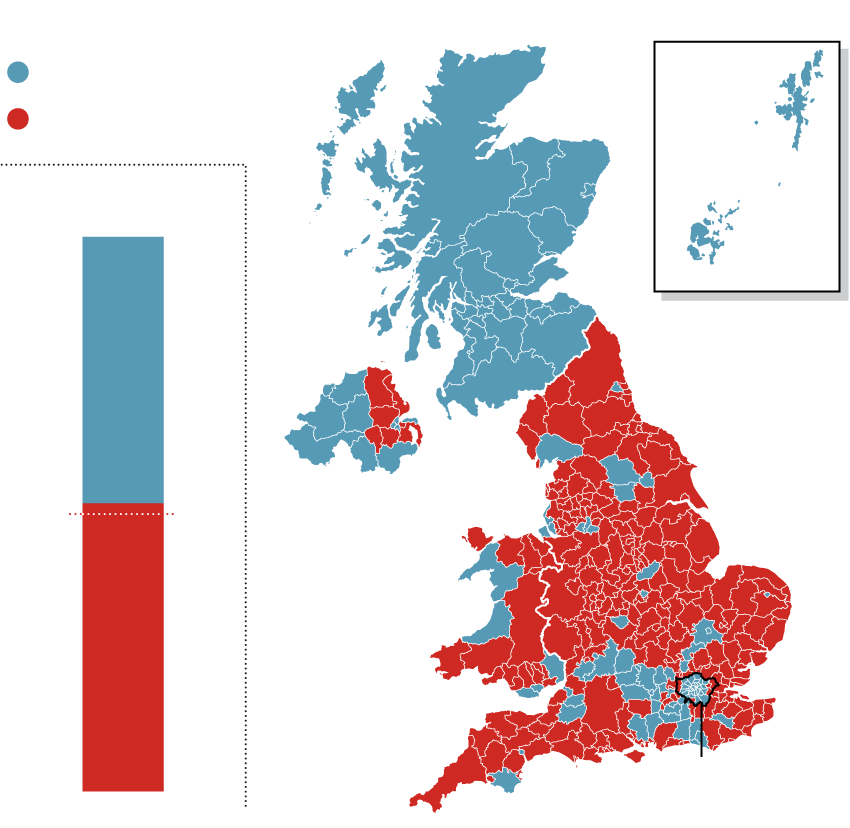 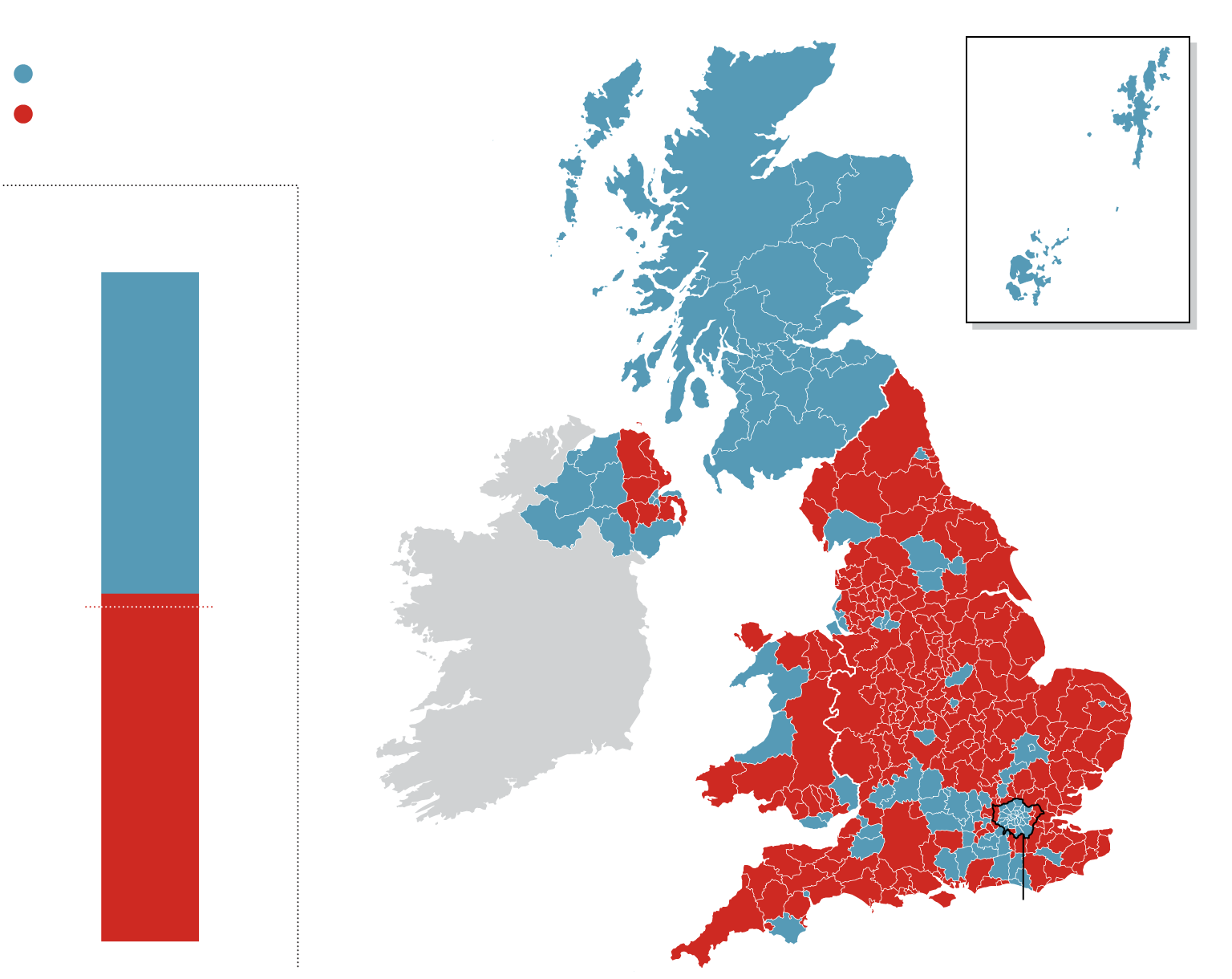 THE GLOBE AND MAIL SOURCE: BBC

A rolling statistical model of YouGov's polls found a correlation between voting preference and age:


WATCH Trudeau: ‘We respect the choice of the British people’

It’s true that the past years have been the most difficult ones in the history of our Union. But I always remember what my father used to tell me: What doesn’t kill you, makes you stronger.

A victory for freedom. We now need the same referendum in France and in EU nations.

#Brexit from a culinary point of view pic.twitter.com/6hdUEVn0sE

In a divorce, it is usually the kids who are paying the price. #youth #BREXIT

WHAT WILL THIS MEAN FOR CANADA?

The Comprehensive Economic and Trade Agreement, known as CETA, could be in trouble. That agreement has already been seven years in the works and has yet to be ratified by the EU or its member states. CETA will be on hold even longer.

The Bank of England has warned that the fallout from a British vote to leave the EU could harm the global economy. Bank of England governor Mark Carney has suggested that Britain could face a recession if it pulled out of the EU. And last week, something akin to panic set in across European financial markets, with investors piling into sovereign bonds, seeking a haven from the turmoil. In Canada, a Brexit could also further fan the flames in Canada's overheated housing market.

A Brexit will likely also cause big headaches for Canadian companies. Canadian firms choose to do business in Britain because it's a "beachhead" to launch into the EU but still shares a language and similar laws with Canada.

Leader of the United Kingdom Independence Party (UKIP), Nigel Farage speaks during a press conference near the Houses of Parliament after news that Britain has voted to leave the European Union by 51.9 percent to 48.1 percent.

HOW DID VOTE LEAVE MANAGE TO PULL IT OFF?

Elite backlash: The Remain campaign barraged voters with a stream of endorsements from economists, business people, union leaders, academics, politicians, world leaders and even celebrities. A day before the vote, Remain released a letter signed by 1,300 business people saying how important it was to remain in the EU. Many CEOs sent letters directly to employees urging them to vote Remain and Bank of England Governor Mark Carney issued several dire warnings. None of it worked and only fed a growing backlash against politicians and so called elites.

David Cameron: The Prime Minister led the Remain campaign and took the brunt of the criticism for its ineffectiveness, and chose to resign. He had been heckled on live TV during two prime time debates and never seemed to be able to connect with people. He couldn't clearly articulate the benefits of the EU and seemed to resort to raising fears about what would happen if Britain left. In July, Theresa May, the Home Secretary in Mr. Cameron's government, emerged as Mr. Cameron's successor as prime minister. 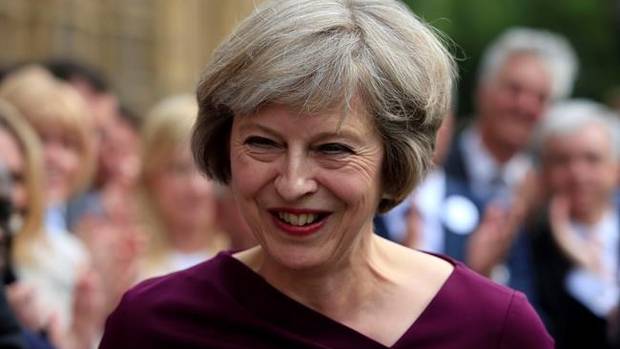 Boris Johnson: The ex-London mayor was the star of Vote Leave and used all of his folksy charm, wit and cleverness to win over voters. His constant refrain of "take back control" resonated and became a handy catch phrase for any issue. Justice Minister Michael Gove, a long-time friend of Mr. Cameron, also proved a deft debater who had a misstep early in the campaign with odd comments about Albania, but recovered and rarely got flustered later.

Labour let down: The Labour party went into the campaign on a half-hearted basis and it showed. Labour leader Jeremy Corbyn refused to share a stage with Mr. Cameron and appeared to make only a token effort to help Remain. But now Labour MPs, who largely backed Remain, have to live with the reality that roughly half of their supporters, and most of their base in Northern England, voted to leave.

Immigration: The UK Independence Party took a lot of flak during the campaign for bringing up Syrian refugees flooding into Europe and the prospect of Turkey joining the EU with fears about millions of Turks heading to the UK. Many of the claims were outrageous, false and disowned by the official Vote Leave campaign. But the message clearly touched a nerve and even those who didn't agree with UKIP leader Nigel Farage drew a link between unfettered immigration from Europe and shortages of jobs and housing in Britain.


Complacency: For weeks the Remain campaign held a comfortable lead in the polls, prompting some in their ranks to worry about complacency. When Vote Leave pulled ahead a week ago, many Remainers thought it would help motivate their base. That seemed to be happening as polls this week showed Remain back in front. But there was always a sense that Brexiteers were far more motivated to get to the polls, and that's what happened.

Polls: Once again the polling industry will have to take a hard look at how it does business. In the days leading up to the vote, most polls put Remain ahead and a survey by YouGov conducted on Thursday, and released after polls closed, had Remain at 52 per cent and Vote Leave at 48 per cent. They got the percentages right, just the wrong way around.

NOW THAT THEY'VE VOTED TO LEAVE, WHAT'S THE FIRST STEP?

Under Article 50 of the Treaty on European Union, Britain is supposed to give notice of withdrawal to the European Council, which is made up of the heads of each member state. During the next two years, both sides will have to negotiate a new arrangement. That deadline can only be extended by unanimous consent, and any new deal would have to be approved by a majority in the European Parliament and every EU state. During this period, Britain will remain a full member of the EU.

COULD ANYTHING ELSE HAPPEN INSTEAD?

Britain could avoid that process altogether and simply pull out on its own by revoking British legislation that brought it into the EU's predecessor in 1973, the European Economic Community. But that would make negotiating a new trade deal with the EU tricky, and all EU legislation, along with free trade, would end immediately.

WHY DID THIS HAPPEN NOW? 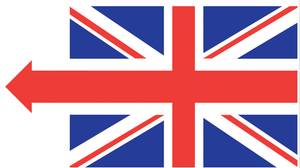 Read Mark MacKinnon's take on the anti-immigrant fear and angry nationalism baring its teeth across the UK.

To quell growing dissension within the Tory party and the rise in popularity of the Euro skeptic United Kingdom Independence Party, UKIP, Prime Minister David Cameron promised in 2013 to hold a referendum on the EU if his party won the election in 2015. They did and he called the vote.

WHAT'S THE TIMELINE FOR WHAT HAPPENS NEXT?

Mr. Cameron said his successor, to be chosen by October, should start the process. But European Commission president Jean-Claude Juncker said Saturday that the British had voted to leave, and "it doesn't make any sense to wait until October to try and negotiate the terms of their departure. I would like to get started immediately," he said. Mr. Camaeron could also hold off and use a leave vote as a way of negotiating a new deal before triggering Article 50, but that would depend on the EU's willingness. On Saturday, And any new deal would still require the approval of the EU and the 27 remaining member states.

A man monitors trading at a stock exchange in Sydney as results from Britain's European Union referendum favoured a leave vote.

WHO ELSE IS GOING TO BE AFFECTED?

Life for Bank of England Governor Mark Carney will get difficult. Mr. Carney raised the ire of the Vote Leave campaign by issuing several dire warnings about the economic consequences of exiting the EU. He has insisted it was his duty to point out risks to the economy, but many on the Leave side felt he went too far. Mr. Osborne appointed Mr. Carney, so if the Chancellor goes, Mr. Carney would lose a big backer.

BRITAIN'S HISTORY WITH THE EU

Britain has been a member of the EU, and its predecessor, since 1973. Two years later, however, Britain held a similar referendum, asking citizens if the country should stay in what was then called the European Economic Community. Sixty-seven per cent of Britons voted yes.

That evolved into the EU in 1993. British governments, particularly those led by Tories, have balked at what they see as the transformation of the EU into a political union and the country has opted out of several EU programs including the euro.

WHAT IS THE EU?

The EU has 28 member states that sends members to the European parliament and abide by the European Court of Justice among other institutions. It has its own currency, the euro, used by 19 members; a parliament; central bank; court of justice; a flag.

Many members of the EU also belong to the euro zone and/or the Schengen Area.

The euro zone is a group of 19 EU states that use the euro and fall under the European Central Bank.

The Schengen Area is named after the town in Luxembourg, where the agreement was signed in 1985. It provides the passport-free movement of people.

Of the EU states, 26 belong to Schengen in one way or another. Three other non-EU countries, Iceland, Norway and Switzerland, are associated members. Britain and Ireland do not belong.

WHO WANTED TO REMAIN IN THE EU, AND WHY?

Mr. Cameron, 23 senior cabinet ministers, the Labour Party, the Liberal Democrats, most economists, the Organization for Economic Co-operation and Development, the International Monetary Fund, most of Britain's allies, including Canada and the United States, most large employers, most trade unions, 13 Nobel laureates.

The Remain side believes that it would be an economic disaster for Britain to pull out.

Roughly 40 per cent of British trade is with the EU and the London financial district has become a world leader because of its unfettered access to the EU. Leaving would have meant slower economic growth, job losses, higher prices and potentially a recession.

The Remain side said Britain should reform the EU from within and said Britain's influence globally would be reduced outside the EU.

WHO WANTED TO LEAVE, AND WHY?

Seven senior cabinet ministers, including Boris Johnson, who is seen as a future prime minister, roughly half of the Conservative caucus, several large businesses, UKIP, the Sun newspaper.

The Leave side said unrestricted immigration from the EU, particularly Eastern Europeans, has hurt the housing market and employment.

It said that leaving the EU would give Britain control over its borders and free the country from mountains of EU red tape. Cutting payments to the EU would also save the British government billions of dollars and allow for more spending on health care and other priorities.

Britain could negotiate its own trade deals with the EU and other countries, much like Canada does.

BREXIT: MORE FROM THE GLOBE AND MAIL