Insufficient de-icing resulted in a 40-car pileup and at least one person being injured on the Port Mann Bridge – the second significant incident to occur on the bridge since its opening last month.

As a result of Thursday morning's rush-hour collisions, the bridge will now be treated more frequently in cold, dry conditions.

Max Logan, spokesman for the Transportation Investment Corporation, known as TI Corp, which operates and maintains the bridge, said a saltwater brine solution sprayed onto the bridge deck at 4 a.m. on Wednesday was supposed to last 48 hours. Crews from Mainroad Contracting, the company responsible for maintenance of the bridge during the winter, patrolled the bridge six times between 10 p.m. and 5 a.m. and "no ice accumulation was identified during those patrols," Mr. Logan said.

However, at around 5:30 a.m., cars began sliding and crashing into one another, with the total number of cars involved quickly climbing into the dozens, said Sergeant Peter Thiessen, spokesman for the Lower Mainland District RCMP. The figure eventually surpassed 40.

Both ice and poor visibility played roles in the pileup, he said. "It was a combination of both, but there was black ice on that bridge deck that played a direct role in these 40-plus crashes," Sgt. Thiessen said. "Plus, combine that with the visibility issue of the significant fog."

One person was injured and required "some hospital care," but that injury was minor, Sgt. Thiessen said.

TI Corp has now instructed Mainroad Contracting to treat the bridge at least once a day, Mr. Logan said.

"Their protocol had generally been to apply brine every 48 hours when the weather conditions are dry, like we've had over the last couple days," he said. "What we've said to them is that it needs to be a minimum of 24 hours in these types of dry conditions and more frequently if there's a higher risk of ice accumulation on the bridge deck."

Thursday's incident was not the result of a design flaw, Mr. Logan stressed, noting the new bridge deck is made of the same asphalt as the old bridge deck.

The collisions were cleared by 9:15 a.m.

This is the second significant incident to occur on the bridge in about two weeks. On Dec. 19, large chunks of ice fell from overhead cables, seriously damaging at least seven cars stuck in traffic on the bridge deck. Several motorists posted to Twitter photos of the damage, which included shattered windshields, dented hoods and broken side mirrors.

At last count, Insurance Corp. of B.C. spokesman Adam Grossman said, there were 275 reported claims relating to the Port Mann Bridge on Dec. 19. However, some may not have been related to falling ice.

TI Corp CEO Mike Proudfoot acknowledged the failure of the coated overhead cables, which were supposed to prevent ice accumulation by drawing snow and rain down the cables and off the bridge. The agency is still looking into a permanent solution for the flaw, but meanwhile will be deploying staff to monitor the cables when temperatures drop below -2 C and precipitation is expected, Mr. Logan said Thursday.

The Crown corporation said it would pay the deductibles of drivers whose vehicles were damaged in that incident and waive the tolls for motorists who crossed the bridge between 10 a.m. and 6 p.m. that day. There was no such offer for Thursday's incident.

The new bridge, which opened on Dec. 1, is part of the $3.3-billion Port Mann/Highway 1 Improvement Project. 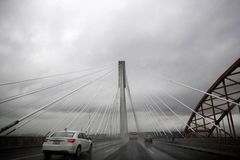 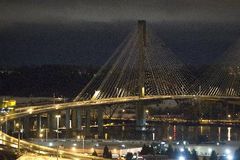 updated
‘Big old bombs’ of snow and ice create havoc on new Port Mann bridge
December 19, 2012
Follow Andrea Woo on Twitter @andreawoo
Report an error Editorial code of conduct
Due to technical reasons, we have temporarily removed commenting from our articles. We hope to have this fixed soon. Thank you for your patience. If you are looking to give feedback on our new site, please send it along to feedback@globeandmail.com. If you want to write a letter to the editor, please forward to letters@globeandmail.com.
Comments