While the B.C. Liberals won three elections campaigning on the economy and good fiscal governance, doing it again this spring was supposed to be trickier.

After all, the party had run four deficits and driven up the province's overall debt load dramatically. It also had its own "fudge-it budget" on its resumé, that being in 2009 when Gordon Campbell's government introduced a pre-election fiscal plan that was discovered afterward to be more than $1.5-billion short of the truth.

That was far worse than the fictitious document the NDP tabled before the 1996 election, one that turned out to be off by about $450-million. It was a "mistake" that the Liberals successfully exploited over the next few elections, holding it up as an example of why the New Democrats weren't to be trusted with the province's books.

But given their own shaky record on this front, it was thought the Liberals had lost the moral authority to campaign on fiscal governance a fourth time. Well, we know what happened: The electorate returned the party with a majority, largely on promises Premier Christy Clark made around the economy and stewardship of the province's finances.

Which brings us to the updated budget that Finance Minister Mike de Jong introduced this week, one that continues to promise a balanced budget but also reveals a climbing provincial debt.

After making debt, and the promise not to burden future generations with more of it, the centrepiece of her campaign, it was going to be difficult for Ms. Clark to introduce an updated budget that was in the red. In fact, it will be hard for her to run any kind of operating deficit during her mandate, barring some cataclysmic financial event that shakes the entire world.

This will mean lean, lean times in government for the next while, which will require next to nothing in the way of raises for public-sector workers that have seen little or no wage hikes for the past several years. That is a new fact of life for government workers in B.C., and they'd better get used to it. Stagnating middle-class wages are here to stay, at least for the foreseeable future.

If Ms. Clark tables successive balanced budgets and stays out of trouble on the scandal front, it is going to make her life much easier come the next election. And don't think she isn't already thinking that far ahead. She is. This is an extremely bright, ambitious, competitive woman who would love nothing more than to exceed her predecessor's time in office. (Which was more than 10 years, making Mr. Campbell the fourth-longest-serving premier in the province's history). What once seemed unfathomable suddenly seems possible.

But the growing debt is a problem for the Premier, even though the media focus more on year-to-year operating budgets.

By the time the next election rolls around, the overall debt will be north of $70-billion. It stood at $45-billion when Ms. Clark took over as Premier in 2011 – a 55-per-cent increase. Mind you, it still represents just 18 per cent of the province's gross domestic product, which is minuscule compared to the debt-to-GDP ratios of provinces such as Ontario, where it is 37 per cent, and Quebec, where it is more than 50 per cent.

Nonetheless, it still signifies a huge financial weight that future generations are going to inherit, something the Premier has vowed she won't allow to happen. She is banking on liquefied natural gas to bail her out.

The Premier's fiscal credibility will rest in large part on how this industry develops over the next few years. People are going to need to see at least one plant in production, if not two, by the time the next election rolls around if Ms. Clark intends to still be talking about a debt-free B.C., as she did during the last campaign.

Meantime, she is going to need to continue balancing budgets, something that is going to be a far more painful process than people know, especially if the economy doesn't start growing. The fun hasn't begun yet.

Teachers’ contracts will be negotiated with tight purse-strings in mind
June 27, 2013 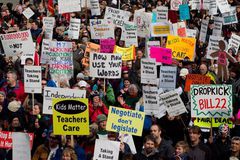 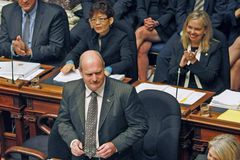 Clark vows to move to surplus as economy slows, debt grows
June 27, 2013
Follow Gary Mason on Twitter @garymasonglobe
Report an error Editorial code of conduct
Due to technical reasons, we have temporarily removed commenting from our articles. We hope to have this fixed soon. Thank you for your patience. If you are looking to give feedback on our new site, please send it along to feedback@globeandmail.com. If you want to write a letter to the editor, please forward to letters@globeandmail.com.
Comments