Barring a last-minute settlement, one of the most high-profile and potentially salacious divorce trials in B.C. history will commence on Monday. The proceedings are promising to draw back the curtains on the lifestyle and business dealings of one of Vancouver's richest individuals – Vancouver Canucks owner Francesco Aquilini.

There is little doubt that Mr. Aquilini has been dreading this day for some time. Lawyers for his estranged wife Tali'ah Aquilini, have indicated in pretrial hearings that when it comes to exacting a fair settlement they intend to expose Mr. Aquilini's full worth.

In the process, they may reveal the many tentacles of his family's business empire, said to be worth in the billions. And that may not be the worst of it. Rumours abound about the dirt that might be flung in his direction.

As of Friday, Mr. Aquilini was insisting he's ready to head to court and deal with whatever awaits him. He insists his biggest concern is the impact the proceedings could have on his five children, a 23-year-old daughter from a previous marriage and four ranging in age from 11 to 18 from his relationship with Ms. Aquilini.

Given what is at stake, the recriminations and counter-recriminations will undoubtedly fly and may include a multitude of spicy allegations. While it's bound to interest the media, the Aquilini children are likely to hear about it too.

And so will their friends. Life at school is unlikely to be a lot of fun for them for the next while. Divorce proceedings can negatively impact kids for years, sometimes for a lifetime. This is something that concerns Mr. Aquilini.

"Like any parent, you're always concerned about conflict between spouses and the psychological harm it could have and we're in a real high-conflict situation here," the Canucks owner said in an interview. "In this case, it's going to be in public and so it's going to have a double effect. They're going to feel like it's their fault. So that's a big concern."

Mr. Aquilini is also concerned about assertions that don't have to be substantiated but nonetheless receive court protection, a legal shelter that extends to the media as well.

"There are things that might be said and there is no accountability for them," said Mr. Aquilini, who was married to his wife for 16 years before their separation. "I think adults can take it but kids are different. Who knows how all this is going to affect our kids and for how long? That is something I'm really, really concerned about."

Earlier this week, lawyers for Mr. Aquilini filed notice that he is seeking orders to protect the confidentiality of private family and commercial interests in the course of the trial. He indicated he was doing this to protect his children who, he insisted, are at the core of both custodial and financial matters.

A publication ban will be sought on matters including the dollar amounts of any contracts and financial statements, as well as other unspecified information that could negatively impact his children. There is concern that the competitive position of the Aquilini family's business interests could be debilitated by disclosure of certain information.

Either way the trial goes, the outcome is unlikely to affect ownership of the Canucks. While the precise nature and financial structure of the family's holdings isn't clear, it's known that much of the Aquilinis' fortune is protected by trusts. The entire family owns the hockey team, for instance, and each member has a say in decisions.

That includes Mr. Aquilini, his two brothers and mother and father.

The fight will be over Mr. Aquilini's share in the family's wealth, the precise amount of which is unknown but guessed to be anywhere from one to several billion dollars. If the family is worth $2-billion, for instance, then a gross calculation of what Tali'ah Aquilini would be seeking is 50 per cent of one-fifth of that total – or $200-million. The question is, will the trust structure allow her access to that money? Or put another way: What is the definition of a family asset versus a personal asset?

Over the next several weeks, we could find out, along with other intriguing information about one of Canada's richest families. 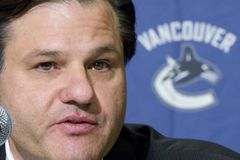 Aquilini family completes purchase of Canucks
December 4, 2006
Canucks co-owner Aquilini defends decision to fire Crawford
May 18, 2006
Follow Gary Mason on Twitter @garymasonglobe
Report an error Editorial code of conduct
Due to technical reasons, we have temporarily removed commenting from our articles. We hope to have this fixed soon. Thank you for your patience. If you are looking to give feedback on our new site, please send it along to feedback@globeandmail.com. If you want to write a letter to the editor, please forward to letters@globeandmail.com.
Comments