The Smart Metering Program will pay for itself through reduced theft of electricity, energy savings and operating efficiencies, and deliver $520-million in benefits over 20 years. – B.C. Hydro, in a pamphlet included with this month's hydro bills.

Quebec shelved plans for a smart meter program four years ago. Ontario went ahead with one, but opposition parties continue to hammer the government over the impact on consumers.

Ontario's Progressive Conservative Party is promising that if it wins the next election, it will unplug the smart meters and give consumers a choice. The NDP says the money would have been better spent on proven conservation measures such as programs for retrofitting homes, more energy-efficient windows or replacing outdated fridges and dishwashers.

Smart meter programs have also faltered in the United States. In retreat after claims of health hazards associated with the technology, inaccurate meters and billing problems, Pacific Gas and Electric Company responded to a court order last month with an opt-out plan.

Why would B.C. be any different?

B.C. Hydro officials say they have learned from the mistakes made in other jurisdictions. Gary Murphy, the chief project officer, said in an interview that most of the benefits from the smart meters would come from operational efficiencies within B.C. Hydro without requiring customers to change their ways.

But savings from customers who shift their use are a significant part of the smart meter program, and in its effort to avoid the controversies that surfaced elsewhere, the utility has given that up. "Customers are not being asked to shift their energy use at this time," Mr. Murphy said. "The smart metering program delivers positive benefits without customers doing anything."

The smart meter plan involves replacing the current electro-mechanical hydro meter on every home and business with a digital meter that will record electricity use at regular intervals. The smart meters transmit the information several times a day to the utility using radio signals. B.C. Hydro will begin installing the meters in July, and anticipate the job will be completed by the end of 2012. Implementation is expected to cost $930-million.

The business case for smart meters, posted on the B.C. Hydro website, provides a list of benefits that includes a savings of $208-million over 20 years through managing energy flows as a result of the information received from the smart meters. Another $220-million in savings over 20 years is anticipated from hydro users voluntarily cutting back their energy consumption after seeing how much energy they use. Automation of the process of reading the meters and other operational efficiencies are expected to bring in more than $300-million in additional savings over 20 years.

The accuracy of the estimates will not be known until 2033. However the utility ensured that the immediate impact on consumers will be nil.

However B.C. Hydro abandoned plans, for the foreseeable future, to vary the rates according to when the energy is used. Nor will hydro use be pegged to the time of day. Unlike Ontario or California, doing your laundry or washing the dishes will cost the same at 6 p.m. or 2 a.m.

The utility gave up about $110-million in benefits over 20 years by making a commitment to maintain rates, regardless of time of use. The business case for smart meters assumed the utility would shift rates according to the time of use. About 30 per cent of consumers were expected to vary their energy use by 2015 to take advantage of the lower rates during off-hours.

Without a seat, B.C. premier to lead Liberals from the sidelines
April 27, 2011 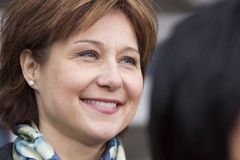