This week B.C. Premier Christy Clark championed Riot TV – because everyone should be able to watch, on their smart phones and tablets, alleged Stanley Cup rioters stand trial.

The unintended consequence of Ms. Clark's latest populist gimmick – a term used even by a member of her own caucus – does serve nicely to highlight the problems in B.C. courtrooms.

On average, 10 cases are thrown out of provincial court every month because understaffed sheriffs, overworked Crown prosecutors and chronic shortages of provincial court judges are leading to unreasonable delays. Now the Premier wants to televise the next big wave of court cases that will back up the system even more.

Riot TV was announced in the Throne Speech on Monday, requesting Crown counsel to advocate for television and radio access to the courts during proceedings for those charged in relation to the Stanley Cup riot. When the government's prosecutors balked, the request was upgraded to an order.

The appeal, on a political level, is that the Premier is seen sharing public anger over the riots – and the fact that no charges have been laid yet more than three months after Vancouver was rocked by violence in the aftermath of Game 7. Rather than defending the justice system, she is channeling that sentiment: "Those criminals committed those crimes in public," Ms. Clark said this week. "What is the matter with them being tried in public as well?"

Ms. Clark is the champion of Riot TV, but the move is inspired by Mike de Jong, the former attorney-general who originally pushed for television access in courtrooms. Left to the role of enforcer is Shirley Bond, the current A-G, who invoked a rarely used authority to order the criminal justice branch to do the Premier's bidding. The final decision will rest with individual judges once defendants are charged and finally come to court. Defendants will have some say in whether cameras make it into courtrooms too: The current protocol – written just months after Mr. de Jong first proposed a pilot project – requires willing participants from all sides.

The genesis of Riot TV can be traced to Mr. de Jong's instalment as A-G two years ago. His pilot project was supposed to get off the ground in the fall of 2010, but it never happened. Mr. de Jong quit his post to run for the B.C. Liberal leadership and, without any sustained political pressure from Victoria, the reluctant players in the court system happily let it slide.

Mr. de Jong, now health minister, says those in the justice system will need to face sustained pressure to accept change. "There is systemic, institutional reluctance to throw open the doors of the courthouse to the people who fund it," he said in an interview this week. He thinks his proposal would have worked better because it wouldn't single out a particular set of trials, and he intended to start with a narrower focus – broadcasting only the sentencing portion of a trial – to let everyone in the system get used to the new regime.

A lawyer himself – unlike Ms. Bond and Ms. Clark – Mr. de Jong recognizes there are times when cameras could scare off vulnerable witnesses. "There is a way to do this that is rational, reasonable and sensitive but built upon the foundational belief that the courts belong to the people, and they are entitled to see what takes place in them," he said. It is no longer his file, but this is still regarded as his pet project and he now has a backer – the Premier – who has taken up the cause.

The judges are independent and have the power to reject it, but the Premier's office has sent a clear message that the promise of "open government" includes them too.

Mr. de Jong would like to see the day when court proceedings are live-streamed, so that the public, and the media, could monitor them from their living rooms or newsrooms. But the Premier's advocacy will not create much of a wake if the judiciary is not persuaded that this is the time to embrace change.

What Ms. Clark has done is shine a spotlight on her government's budget cuts to the justice system at every level, from the number of judges on the bench to the money available for legal aid.

Currently, there are 2,300 cases that are expected to take 18 months or more to get to court. Add what could be hundreds of riot cases to the mix, and the result could well be more trials abandoned.

"To the extent there are challenges around resources, these will become even more apparent, so in many ways it is the executive branch of government that stands to lose the most as some of those warts become apparent" – that's Mr. de Jong's blunt assessment about the potential impact of Riot TV. And he thinks that is just fine: "They should be in the public domain," he said. 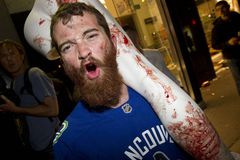 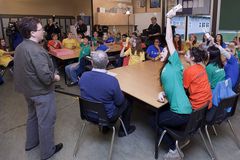 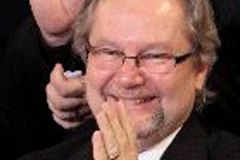 Flashback: B.C. government passes law delaying welfare for new immigrants
October 6, 2011
Follow Justine Hunter on Twitter @justine_hunter
Report an error Editorial code of conduct
Due to technical reasons, we have temporarily removed commenting from our articles. We hope to have this fixed soon. Thank you for your patience. If you are looking to give feedback on our new site, please send it along to feedback@globeandmail.com. If you want to write a letter to the editor, please forward to letters@globeandmail.com.
Comments