It's a cool overcast fall morning on Vancouver Island as John Kirk and his assistant, Adam McGirr, set a course across Cameron Lake - an excellent day for trout fishing and even better weather for lake-monster hunting.

About a kilometre from the beach, Mr. Kirk directs the driver to cut the engine along the steep rocky shoreline, while Mr. McGirr lowers a fish-shaped underwater camera through the lake's glassy surface, hoping to capture some images of "whatever is down there."

"We already had contact this morning, which was really surprising," Mr. Kirk said. "The fish finder picked up two very large objects eight to 10 feet from the bottom. They were definitely moving."

It's the second straight year that Mr. Kirk, co-founder of the British Columbia Scientific Cryptozoology Club, has organized an expedition to Cameron Lake to investigate a recent spike in reported sightings of an Ogopogo-like creature.

Still, after a 20-year career as an amateur hunter of lake monsters, sasquatch and other "cryptids" - creatures that have been reported but not scientifically proven to exist - he has serious doubts about the existence of the so-called Cameron Lake monster.

"From Day One, I've been very skeptical of this being a so-called lake monster," he says, noting that the narrow, glacial lake near Port Alberni is only five kilometres long.

"It doesn't make sense scientifically to have a massive great beastie living in a wee lake."

"Sonar hits" the club recorded during last year's excursion, and the images captured early Tuesday, indicate that whatever is down there is less than three metres long, Mr. Kirk said.

"It wouldn't surprise me if somebody may have introduced some very large fish, maybe some sturgeon, into the lake as prank," he said.

Since 2004, Mr. Kirk has received about a dozen reports from people claiming to have seen an unusually large fish-like creature in Cameron Lake. In one case, a couple driving along the Alberni Highway, which hugs the south side of the lake, "saw a black object swimming parallel to the highway at high speed," he said.

Perhaps the best-known sighting occurred on July 30, 2007, when Nanaimo resident Brigitte Horvath snapped a photo of what appears to be one or several large silver-backed creatures in the lake.

The club has received reports from people who witnessed "some kind of lake creature" as early as 1981. Local aboriginal legends include tales of a serpent-like creature in Cameron Lake called "sisiutl chameleon," added Mr. McGirr, the club's vice-president.

Mr. Kirk's fascination with "cryptids" dates back to 1987 when he and his family had, while vacationing in Kelowna, what they believe was a close encounter with Okanagan Lake's legendary underwater monster, the Ogopogo.

Two years later, Mr. Kirk and a group of "like-minded people" formed the cryptozoology club in hopes of either proving or disproving the existence of cryptids around the world.

Author of In the Domain of the Lake Monsters, Mr. Kirk, who has no formal scientific training, has dedicated more than 20 years to his search without finding any definitive proof of previously unidentified life forms.

Still, he insists the club is dedicated to serious investigation, not the promotion of crackpot theories.

The club gets most of its scientific credibility from co-founder Paul LeBlond, former head of the University of British Columbia oceanography department and a fellow of the Royal Society of Canada, he said.

"We're not like paranormalists or people who are looking for ghosts and werewolves and fairies.

"We're serious. We want to put these stories to rest and find the ultimate truth."

Mythic beasts at the Museum of Civilization
May 2, 2018 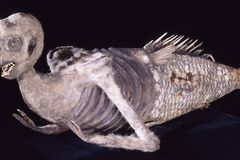