Caddell chronicled those exciting years in the pages of the Georgia Straight weekly newspaper and Reel West magazine. His byline also appeared regularly in such movie-industry bibles as Variety and The Hollywood Reporter.

The writer, who, in the words of the industry he so adored, has faded to black at age 63, became a familiar presence on the set and in the darkened screening room. He was well known in his adopted city as a raconteur, enlivening parties with stories delivered in a stentorian voice as though being presented in Sensurround.

A conversation with the garrulous Caddell was more full-length feature film than short-subject documentary.

It could be hard to get a word in when the critic was in full-throated anecdote, the tales often featuring A-list directors and Hollywood stars whom he interviewed over three decades. A regular figure at film festivals and publicity junkets, Caddell was said to have interviewed Meryl Streep more than 20 times.

He brought to his journalism the accuracy of a trivia buff and the relentless goodwill of a movie fan. He was not one to savage a film, preferring instead to seek the tiniest nugget of cinematic gold buried in the dross.

His knowledge of the movie industry was so intimate that Caddell was without peer as an Oscar prognosticator, his insider knowledge trumping whatever allegiance he might have had to a particular movie.

The passion he brought to the movie business was heartfelt, though it must also be said the movies helped pull Caddell from youthful penury as a man seeking an outlet for his restless energy.

Ian Ramsey Caddell was born in Montreal on March 10, 1949 – the second of four children born to Elga and Philip Caddell, an artillery captain in the Second World War, known respectively as Duckie and Pip. Ian made his newspaper debut at age 3, when the Monitor newspaper of the Notre-Dame-de-Grâce neighbourhood published a story about the tyke being the most frequent customer of the area's new library even though the boy had yet to learn to read. He was a fan of the misadventures of Curious George, the easily distracted monkey who inadvertently causes chaos.

His first home was part of a complex built for returning veterans known as Benny Farm. The early affinity for books was soon replaced by an obsession with television. His father could not afford one of the pricy sets, so Ian, age 6, paraded a sibling, three years younger, to the doorstep of unsuspecting neighbours. "This is my little brother Andrew. Isn't he cute?" Ian said. "Can we come and watch your TV?"

His parents were mortified when they learned of the ruse. In time, cash gifts from grandparents to the Caddell children were pooled to cover the cost of a small, black-and-white television.

When he was 8, the family moved to a house in Montreal West, situated near the edge of an escarpment offering an unobstructed path to the television signals of coveted American networks. Ian pressed the family to purchase and install an antenna, which they did – a joyful $30 investment.

Caddell struggled with his grades in high school, though he scored high scores on IQ tests. He finally graduated with mediocre marks two years after his cohort, a puzzling performance probably caused by an undiagnosed attention deficit disorder. He worked as a waiter before settling in Vancouver shortly after the October Crisis of 1970.

His first address was a fleabag hotel on skid row. After enduring a period of unemployment, Caddell studied journalism at Vancouver City College before moving on to Simon Fraser University, where he edited the Peak student newspaper. He became president of the alumni association shortly after graduation.

The timing was fortunate, as the university played host in February, 1981, to a conference honouring the poet and civil libertarian F.R. Scott, whom Caddell got to meet, as he did such illustrious attendees as Thérèse Casgrain and prime minister Pierre Trudeau.

After a stint as publicist for Famous Players, Caddell liked to tell the story about the day the manager of the Eve Theatre was fired for violating company policy by neglecting to greet patrons at the entrance. The theatre manager seemed hard done by, as the Eve featured soft-core pornography. The prospect of a front-door greeting would have served only to inhibit clients and reduce ticket sales.

For a brief time, Caddell held an advertising job in Newfoundland, fully embracing the province's reputation for robust living, jigging for cod on the Atlantic and drinking rum and Coke on George Street in St. John's.

He embarked on a freelance writing career on his return to Vancouver. To describe Caddell as prolific hardly does justice. His byline appeared in almost every publication remotely likely to publish an article on the movie business.

His feature interviews often graced the cover of the Georgia Straight, whose editors sang his praises.

Unlike many of his peers, for whom procrastination can be worn as a badge, he filed copy before deadline and was not known to complain about his words being cut when space proved short.

A writer who never found great financial reward despite a voluminous output, he proved to be a generous matchmaker between journalists and clients. He also readily offered himself as a job reference for talented young people, his own rough beginnings making him empathetic to their quest.

Caddell worked as marketing director of the Vancouver International Film Festival and was a driving force behind the Vancouver Film Critics Circle, which recently renamed its achievement award in his honour.

An encyclopedic knowledge of movies and television was matched by an interest in sports teams, especially hockey's Vancouver Canucks and baseball's Montreal Expos. Another passion was his taste for Coca-Cola. When the company abandoned its original formula, Caddell responded by purchasing quantities of cans and bottles of the product as though preparing for a soft drink apocalypse.

Caddell enjoyed a romantic life best described as complicated; he was married twice, to Carol Thorp and to Dorothy Rusak, later establishing a lengthy common-law relationship with Nancy Muise.

He enjoyed better reviews in his role as father, a fact cited in the tributes local film journalists have written about a man many considered a mentor. The Toronto critic Bruce Kirkland once wrote about a junket that took Caddell away from home on the occasion of a son's eighth birthday. To make up for his absence, Caddell cajoled the actor and former wrestler known as The Rock to sing Happy Birthday into his tape recorder.

Pascual Pérez, a rascal known for pitches he didn’t throw, found a home with the Expos
November 22, 2012 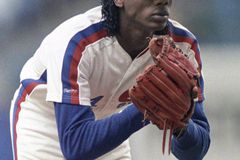 Feared for ferocious on-ice checks, he was equally successful in the more genteel world of golf
October 23, 2012 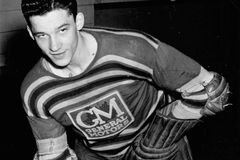 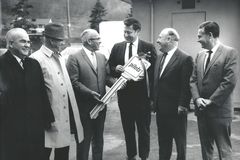