Lloyd Bentley Sr. settled at Bear Flats along the Peace River in the 1940s. Today, his granddaughter Arlene Boon still farms the land, living in the home her grandpa built in the northeast corner of B.C.

For three generations, the family has resisted the province's plan to build a third dam on the river, a project that would wipe out their homestead with its heritage buildings, its fields of hay and grain, and the hills they have left uncultivated for herds of deer, moose and elk that roam the valley in the winter.

"All of us hold-outs in the valley plan on dying here," Ms. Boon said in an interview this week. Since BC Hydro and the provincial government first pushed the Site C dam project in the 1970s, there have always been voices against the project in the Peace Valley, decrying the loss of prime agricultural land and wildlife habitat. "Grandpa said he wasn't selling until the water was up to his knees," she said. Twice the project has been shelved, but in 2010, the B.C. Liberal government announced it will build the dam.

Since the plans were dusted off, Ms. Boon has felt a black cloud hanging over her. "I don't think a day goes by that my husband and I don't think about the project. Every day to me is precious because of this threat."

Today, however, Ms. Boon has new allies. Fort St. John – the community of 19,000 that will host two work camps to house thousands of construction workers – is affluent enough not to be bowled over by the promise of a $7.9-billion megaproject on its doorstep. The project, which was once seen as a rich source of jobs for a boom-and-bust town, is now regarded by many as a threat to an increasingly comfortable lifestyle.

The B.C. Liberals would dearly love to use the Site C project as a symbol of bold economic development in the coming election campaign. But first they have to overcome the skepticism of far more than a few farmers clinging to the banks of the river.

To that end, BC Hydro has hired a former senior government bureaucrat, Jessica McDonald, to negotiate "legacy benefits" with the local governments. Negotiations have been going on for years, but to meet an election campaign target, a deal must be reached in just three months. Settlements with 50 first nations, meanwhile, are a distant prospect: just 13 have signed agreements on how to proceed with consultations.

BC Hydro started buying property to clear the way for Site C in 1977, while Site B – the Peace Canyon dam – was under construction. The third dam was always presented as a requirement for British Columbia's growing energy needs, and sometimes as a potential source of power for export.

In the early 1980s, during the second attempt to get the project off the drawing board, Fort St. John's Chamber of Commerce endorsed Site C as an antidote to an economic slump that brought business vacancy rates of 45 per cent.

This was the town known for the "100 days of hell," when the boys would head off to camps to work on oil rigs in the small window between freeze-up and thaw. Then the rigs would be hauled to the next site, and the jobs would be gone.

Today, the City of Fort St. John has broken that tumultuous economic cycle thanks to all-year drilling, manufacturing and a high-tech industry. The challenge now is housing workers attracted here by the prospect of high-paying jobs. The appetite for transient camps of 1,700 workers on the town's doorstep is no longer so great.

Energy Minister Rich Coleman has vowed the project will be built, but devising an election photo-op will be tricky: He will have to win over a remarkably broad spectrum of critics if this isn't to backfire.

"A lot of people think Fort St. John is all rough-and-tumble, Ford F-350s," said Lori Ackerman, mayor since 2011 and a former family service director at the local Salvation Army. But the town's conservative bent is entwined with a strong thread of conservation, as well as civic pride in a community-built social safety net. When the hospital asked for a CT scanner, residents raised $1.9-million in six months.

"We're not asking BC Hydro to build us a fabulous community. We already have that," she said. After extensive public consultation, the city produced a position paper in December. There are requests for local hiring policies and for redrawing the city boundaries, but the overall objective is to deny BC Hydro the power to run the show autonomously.

"Are they interested in becoming part of the community and contributing like all of the rest of the taxpayers to police services, fire services, water and sewer, recreational services? Or are they going to sit on our outskirts and when the guys get a night off, they are going to come into town and go to our drinking establishments and we just have to deal with the fallout that happens as a result of that?"

Ms. Ackerman doesn't think she can stop the project; she just wants her community to have a say in what it looks like.

"Noah probably wasn't in favour of the flood, but he built the ark. We're building the ark."

Pat Pimm, the local Liberal MLA, was elected in the riding of Peace River North in 2009. His government has viewed the environmental assessment that will be completed in 2014 as a formality. But Mr. Pimm cautions against treating it as a done deal. "I've lived here in Fort St. John for 55 years. I understand the beauty of the valley, and I understand the angst that some people here have."

In the past decade, his home town has matured, and along with that is a growing sense that development needs thoughtful planning. "It's gone from a town to virtually a city. We're building on stable jobs, not 500 one day, then zero the next. It's changed the fabric of the community," Mr. Pimm said. "You can honestly say, 'People are proud to live in Fort St. John.'"

Mr. Pimm has set out more than a dozen demands in private correspondence with his own cabinet. The terms are modelled on those that Premier Christy Clark laid down for the proposed Northern Gateway pipeline, which calls for environmental security and a fair share of the benefits. In this case, the residents of Peace River North want to make sure they don't shoulder the risk while the benefits are diluted across the province.

Brad Brain is president of the Fort St. John Chamber of Commerce, which this time around has offered no endorsement. "As a general concept, we are not against it, but we are starting to get apprehensive," he said in an interview this week.

Mr. Brain worries the community will be steamrollered by demand for more power from regions of the province that will never have to live with the consequences if something goes wrong.

"We would hate to see it rammed through and that's the very real possibility," he added. "We are tucked away in a remote northern corner of the province with a small population and there are a lot of voters down south."

The dam will change the landscape of the valley, flooding 5,550 hectares. That's something, he said, that should be approached with caution.

"We can't get some Wite-Out and erase it later if we change our mind."

60 metres above the riverbed

BC Hydro forecasts enough energy for needs of two LNG facilities
May 30, 2012 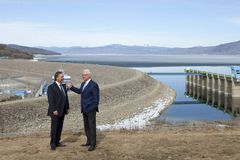 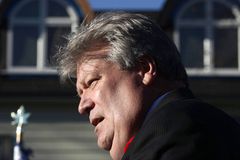 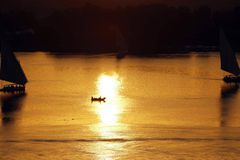