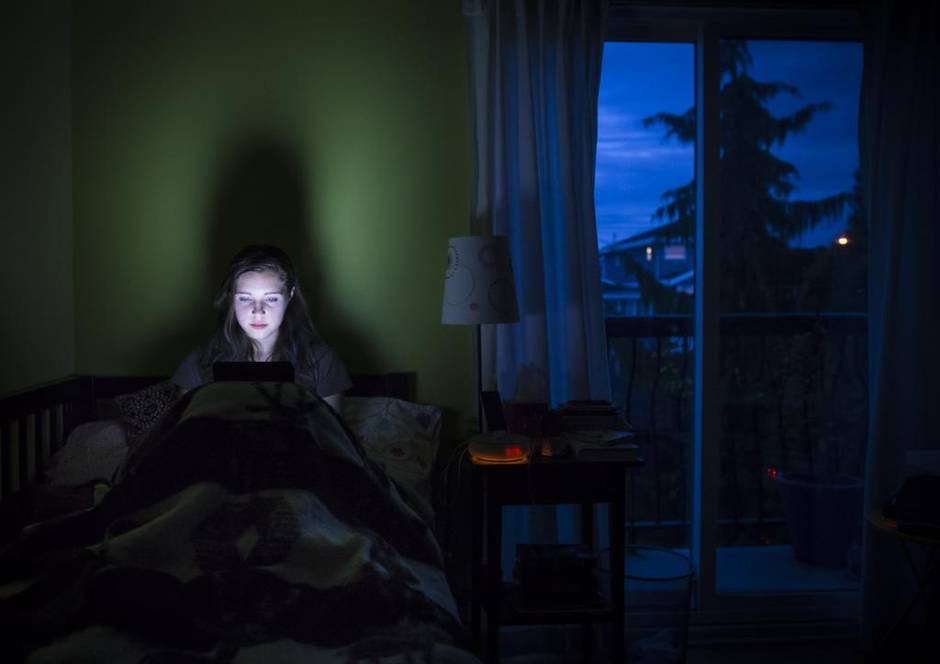 
A B.C. high school has teamed up with university researchers to find out
what factors are hurting students' academic and mental health –
and, more importantly, how to address them.
Wendy Stueck reports


Over the past few years, teachers and counsellors at Vancouver Technical Secondary grew increasingly concerned about student stress, which ranged from pre-test jitters to breakdowns.

As part of an effort to get a grip on the issue, the school, with help from researchers at the University of British Columbia, conducted a survey last spring to measure students’ well-being.

Some of the results were daunting. Nearly 70 per cent of students said they do not feel rested when they wake up on school days. A quarter reported they sometimes did not have enough food in their home to eat.

And one in three students who responded to the survey reported that they regularly, and deliberately, cut, bang or burn themselves. (Provincially, 15 per cent of students reported deliberately injuring themselves on purpose without trying to kill themselves in the past year, according to the 2013 B.C. Adolescent Health Survey.)

Researchers from the University of British Columbia surveyed 907 students at Vancouver Technical Secondary School about a range of topics related to their personal and academic well-being:

53
per cent had been called such names themselves

35.4
per cent felt they did not have enough time to do their assigned homework

69.2
per cent said they don’t wake up feeling rested on school days

33
per cent reported intentionally cutting, banging or burning themselves on a regular basis

Van Tech is addressing findings about self-harm through partnerships with parents and outside mental health experts, says school vice-president Leann Buteau. Other key findings – specifically, those related to sleep and time management - staff and students are tackling themselves. It’s hoped those efforts, unrolling as the Vancouver Technical Wellness Initiative, could become a template for other schools and identify strategies that result in measurable improvements to students’ health – by taking relatively simple, cost-effective steps, including programs to educate students and parents about the importance of sleep.

“I’m not one to sleep very much,” says Anna Altwein, a 16-year old Grade 10 student in Van Tech’s Flex Humanities program who is involved with the Wellness Initiative.

“I get home and I might be lazy or tired and don’t get homework started until at least 7 pm – and if it’s one of those days, where you have two tests the next day, I’ll be up pretty late...I don’t find myself focusing as well. My mood is definitely affected and you kind of get into a slump.”

Ms. Altwein also said she was not surprised by the percentage of students who reported self-harm in the Van Tech survey, saying she believes self-harm in high schools is more prevalent than many people would think and that such levels are not exclusive to Van Tech.

The project at Van Tech came about after Derek Roelefson, a public health nurse at Van Tech and other schools, in 2013 contacted Elizabeth Saewyc, a professor of nursing and adolescent medicine at UBC’s School of Nursing whom he knew through previous research.

Mr. Roelefson was hoping for suggestions to find grant money to study what he was hearing anecdotally from teachers and counsellors about student anxiety. He wanted to move from “putting out fires” to a more targeted approach. It turned out Dr. Saewyc had funds and a research mandate that dovetailed neatly with Van Tech’s goals.

In 2012, she had been named to head a five-year, $2-million project funded by the Canadian Institutes of Health Research. Formally known as “Reducing stigma, promoting resilience: Population health interventions for LGBTQ youth”, that program involves multiple universities and research sties and is studying LGBTQ-focused programs to determine whether they help reduce health disparities between LGBTQ youth and their heterosexual peers. 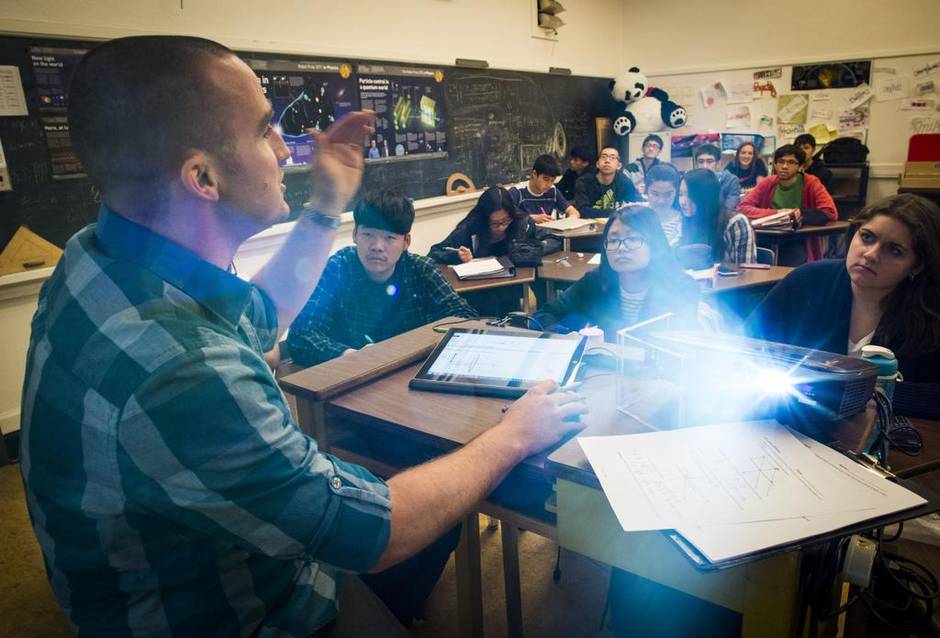 LGBTQ youth have higher rates of suicide and depression and are at greater risk of homelessness and discrimination in housing, education and employment.

As part of that country-wide project, UBC researchers have sought out community partners that have introduced LGBTQ-focused programs. Van Tech, with its large, ethnically-diverse population – students have reported speaking 55 different languages at home – and a thriving gay-straight alliance, was an ideal research site. The school has about 1,600 students, making it the third-biggest secondary school in the city.

“It [the Wellness Initiative] is not going to be teachers and counsellors sitting around and trading horror stories about how stressed out the students are,” says Mr. Wyper. “And it legitimizes the project for [UBC] too. It’s not a bunch of academics in an ivory tower. It is a win-win – we get the rigour and clout of working with UBC, they get the real data.”

Students have come up with a plan for a sleep awareness week next fall in the hopes of encouraging good “sleep hygiene” through measures such as limiting screen time before bed, maintaining a regular schedule and getting enough exercise. Staff and students are mulling the idea of a sleep challenge in which students would try to hit a cumulative, group sleep goal – outside of school hours. 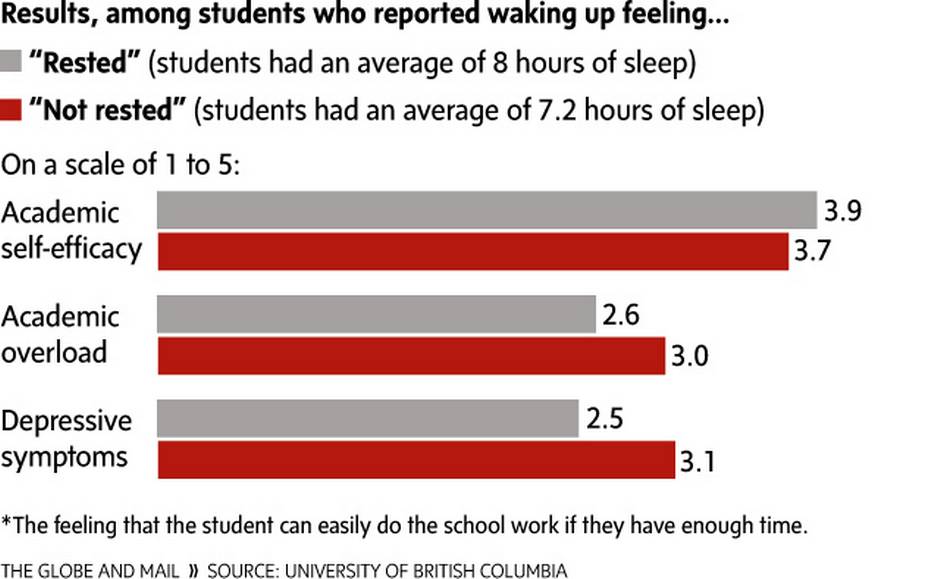 The National Sleep Foundation recommends adolescents have between 8 and 9 hours of sleep each night. For the first time in 2013, the B.C. Adolescent Health Survey included a question that asked how many hours of sleep students got the night before. Less than a third of students reported sleeping for nine hours or more. Nearly half reported they were doing homework after they were supposed to be asleep and 82 per cent said they were online after they were supposed to be asleep.

The reason shut-eye matters: sleep is tied to mental health. Rates of good or excellent mental health increase with each hour of sleep that students get, according to the provincial survey, which was conducted by the not-for-profit McCreary Centre Society.

Food-related discussions are also taking place: Van Tech already has a cafeteria and a food garden and is looking into ways to expand its food program.

And work is underway on other survey findings, including those related to safety and bullying for people who are gay or trans-gendered. Ms. Altwein says the gay-straight alliance is working on plans for a universal, gender-neutral washroom. (In last year’s survey, nearly 15 per cent of students reported bathrooms felt unsafe).

“It will happen,” says Ms. Altwein. “It’s definitely going to happen, I can tell you that for sure.”