Gordon Campbell listens on the phone as a blunt observation from the sweeping new book on his 10-year run as B.C. premier is read to him. It crystallizes the bittersweet conclusions of the newly published The Campbell Revolution? Power, Politics and Policy in British Columbia.

"In all, Gordon Campbell was a very complex politician," editors Jason Lacharite and Tracy Summerville of the University of Northern British Columbia write in introducing 13 chapters written by political scientists on the Campbell era.

"He was competent, had a vision for the province, and possessed exceptional management skills. At the same time, he could be obstinate, impulsive, and even detached from the myriad views and values that inform and energize provincial politics."

In response, the former BC Liberal leader, who governed from 2001 to 2011, said everyone is entitled to their opinion.

"I tried to bring new ideas to the province. I tried to be clear about what the choices were. I tried to be open about how we made the choices," said Mr. Campbell, who had not heard about the book, newly published by McGill-Queen's University Press, until contacted by The Globe and Mail.

"I think it's always interesting when people write books and they never talk to you when they are talking about you, but that's a choice they obviously made," he said.

"I may give the book a read and when I do, I will see how I feel about the sentence." In a joint interview before Mr. Campbell spoke on the new book, the editors said it was not uncommon for academic authors to avoid contact with their subjects, although Mr. Lacharite said "of course" he would be interested in the former premier's views on the finished product.

Mr. Campbell, now 69, said he is not worried about criticism.

"If I was concerned about criticism, I would have stopped after the first day."

The 350-page Campbell Revolution? has been an open secret. For six years, Mr. Lacharite and Ms. Summerville have been working with a dozen academics from across B.C. and beyond, coaxing out chapters on various aspects of Campbell-era policy.

That policy came at a time of tax cuts, program change, regulatory reform and ferocious criticism of the Campbell agenda in which the editors say the former premier distilled the movements of such conservatives as Ontario's Mike Harris and Reform's Preston Manning into something palatable for B.C voters. "Campbell came in with the momentum of change in other places," Ms. Summerville said.

The book took so long to finish because other academics reviewing the material as part of a routine process of peer review had questions and suggestions that led to further revisions.

The finished product includes chapters on Mr. Campbell's handling of the province's Crown-owned BC Hydro utility, the arts, the environment, labour relations and the 2010 Winter Olympics. Mr. Lacharite wrote about tax policy. Ms. Summerville contributed a chapter on Mr. Campbell and neoliberalism.

The book was written, said the editors, for an academic audience as well as members of the public who are interested in politics. Mr. Lacharite said they ruled out cheap shots aimed at the former premier. "We didn't want to Campbell-bash because I think reflexively there's a tendency to want to bash people in positions of power. We wanted to provide something more even-handed."

Asked if any other modern B.C. premier would have warranted the attention of The Campbell Revolution? the editors were at a loss for a quick answer.

Maybe W.A.C. Bennett, they suggested. Certainly not Christy Clark, who recently left politics after about seven years as premier. "I don't think she has much of a policy legacy at all. She basically ran with what Campbell established," Mr. Lacharite said.

"Campbell was, for lack of a better word, a superstar," Mr. Lacharite said, citing, for example, the former premier bringing in the carbon tax that remains a point of debate today.

"He sort of had the right mix of personality and aggressiveness and principle and all those things, but he was a very vulnerable person, too, and he made a number of mistakes that cost him in the end," Mr. Lacharite said.

Mr. Campbell's bespectacled visage stares out from the cover of the book. The editors say some of their current students were kids when Mr. Campbell left B.C. politics in 2011 so have little relevant memory of him.

That is ironic because the former Vancouver mayor once dominated B.C. politics, pleasing his fans and vexing his critics. In 2001, he led the BC Liberals to win 77 of 79 B.C. legislature seats. In 2010, he announced plans to resign amid a backlash over his plans to enact a harmonized sales tax in the province.

After stepping down, Mr. Campbell was named Canadian High Commissioner to the United Kingdom – an assignment that lasted until 2016. Asked what he is up to now, Mr. Campbell said he is serving on some boards. "I am having a good time doing that."

The former premier said he wouldn't rule out writing his own account of his years in power. "It's one of those things that lingers around in your head," he said. "It's interesting to me. I am not sure it would be interesting to anybody else. I've thought about it and I'll continue to think about it."

He added, "I think Churchill once said, 'If you don't write your history, someone else will write it for you.' Maybe I should do that. I don't know."

Asked if he had any thoughts about current B.C. politics, Mr. Campbell laughed and declined comment.

Opinion
Legislatures in B.C. and Alberta are sounding more like a playground
November 10, 2017 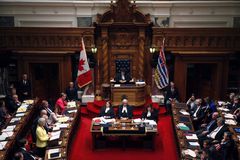