Two men from a religious sect in southeastern British Columbia have made their first appearance to face polygamy charges, with outspoken community leader Winston Blackmore, who was accompanied in court by eight daughters and a granddaughter, pledging to "absolutely defend" himself.

Mr. Blackmore and his brother-in-law, James Oler, were charged in August. The indictment against Mr. Blackmore alleges he has 24 wives, while Mr. Oler is accused of having four.

The community follows a fundamentalist form of Mormonism that, unlike the mainstream church, still condones polygamy. Mr. Blackmore and Mr. Oler each became leaders of separate factions when Bountiful split in two more than a decade ago, though members of the community have said Mr. Oler is no longer in charge.

Mr. Blackmore sat in the public section of the courtroom during Thursday's hearing, surrounded by his daughters and granddaughter, while his lawyer appeared on his behalf.

Mr. Oler told the judge he had yet to hire a lawyer and asked for more time to do that.

Both men's cases were put off until Dec. 4.

Also appearing in court were Emily Ruth Crossfield and her husband, Brandon James Blackmore, who is Winston Blackmore's son. They are charged with unlawfully removing a child under 16 from Canada with the intent that an offence of a sexual nature would be committed.

Neither had retained a lawyer and the judge suggested they speak to the legal aid lawyer who was in the courthouse.

The husband and wife are followers of Mr. Oler's faction, which is believed to remain loyal to jailed U.S. polygamist Warren Jeffs, who leads the Fundamentalist Church of Jesus Christ of Latter-Day Saints, or FLDS. Their case was also put off.

When asked outside the courthouse whether he speaks to his son often, Winston Blackmore said: "Not for a long, long time."

Winston Blackmore's lawyer asked that he be permitted to travel into the United States because he has family on both sides of the border. The judge granted the request, amending a list of conditions that previously required him to remain in B.C. or Alberta.

Mr. Oler made a quick exit from the courthouse, avoiding questions from reporters.

But Mr. Blackmore, dressed in a black suit and tie with a white shirt and wearing a baseball cap with the initials WB, stopped outside to speak with journalists and pose for photographs alongside his daughters and granddaughter.

"I don't really know that much [about the prosecution's case]," he continued. "I haven't seen anything and it's probably wise not to say anything."

Mr. Blackmore and Mr. Oler were charged with practising polygamy in 2009, but the case was thrown out over the government's use of a special prosecutor.

That prompted the B.C. government to launch a reference case to determine whether the law was constitutional, which ended in 2011 with a judge ruling the ban on polygamy does not violate the Charter of Rights and Freedoms.

"I will absolutely defend," said Mr. Blackmore, though he added his financial situation will make it difficult to pay for a lawyer.

Mr. Blackmore said he'll "just live one day at a time" while the legal case unfolds.

"It's Thanksgiving weekend. I'm just going to go home and be thankful." 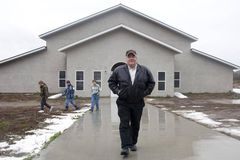 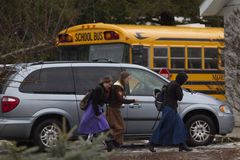