As the long-awaited Evergreen Line light-rail system opened on Friday, Dwight Donaldson was lined up outside the Coquitlam Centre station to get on first, with plans to do something he would not have tried in the past.

He was going for lunch in downtown Vancouver's Gastown district – a journey that would involve taking the new 11-kilometre line through the Tri-Cities region east of Vancouver and then transferring to another SkyTrain line into the Vancouver core.

Why? Why not. "Now we're in Vancouver, just a stone's throw from Gastown or any of that stuff," Mr. Donaldson said, addressing a reality many say has come to pass as Evergreen links three cities – Coquitlam, Port Moody and Burnaby – into a system of automated transit that now covers 79 kilometres.

With the opening of the $1.4-billion SkyTrain line after about four years of construction, the Vancouver region has the world's largest automated – or driverless – transit system in the world, beating out Dubai.

"It's a point of pride," said Kevin Desmond, chief executive officer of TransLink, the regional transit authority, noting other transit systems have taken interest in what the Vancouver region has accomplished. "I think that's just supercool."

The Evergreen Line, which began running at noon, was a check on the To-Do list for transit in the region that includes light-rail in Surrey, a major underground subway across Broadway in Vancouver and a new Pattullo Bridge – key pieces of a 10-year transportation plan the Lower Mainland mayors council approved last month.

B.C. Premier Christy Clark said at an opening ceremony that talks continue on funding for these items, with uncertainty around Ottawa's contribution. B.C. has committed $646-million to the first phase of the mayors' plan, but is waiting for Ottawa to announce its share before declaring its financial intentions for the second. She said she did not know if the issues could be resolved before the May, 2017, provincial election.

But political leaders and others, including Mr. Donaldson, were marvelling that Evergreen finally exists, kilometres of overhead, at-level and underground rail.

The federal government contributed $424-million and B.C. provided $586-million. TransLink, the regional transit authority, ponied up $400-million. The project is coming in $70-million to $80-million under budget.

However, the train line took years to get off the ground, and when construction finally began, it was scheduled to open in the summer of 2016. Delays in tunnel boring, including several months during which the boring machine sat idle, prompted officials to push the completion date to the fall of 2016. A year ago, it was projected to be ready by early 2017, but did not take that long.

Speakers at the opening ceremony talked of how long they had waited to be in the stations and see the trains run after all the intense debate over funding, technology, routes and other issues.

Ms. Clark said she had been making the case for the Evergreen Line since she was elected as a member of the legislature in the Tri-Cities in 1996. "So many of you who are here were here in 1996, when we started fighting for this in this community," she said.

But Coquitlam Mayor Richard Stewart, a former B.C. Liberal MLA, said he was on the case much earlier. "[It] has been an event 30 years in the making, something I have been looking forward to since 1986," he said, noting that is when Coquitlam was told it was "next" for SkyTrain expansion.

He said it became real to him when he visited a two-kilometre line that is part of the system.

Mr. Desmond said he is confident the system will be popular. Projections suggest the extension will carry 70,000 people a day by 2021. "I am utterly convinced it's going to be very successful."

Wendy Predavec lined up for about three hours on Friday to board. She stood in the rain at the front of the line with her 72-year-old mother, Vera. Going on the train was a birthday present for the elder Ms. Predavec.

"I wanted it to be here sooner," the Burnaby resident said. 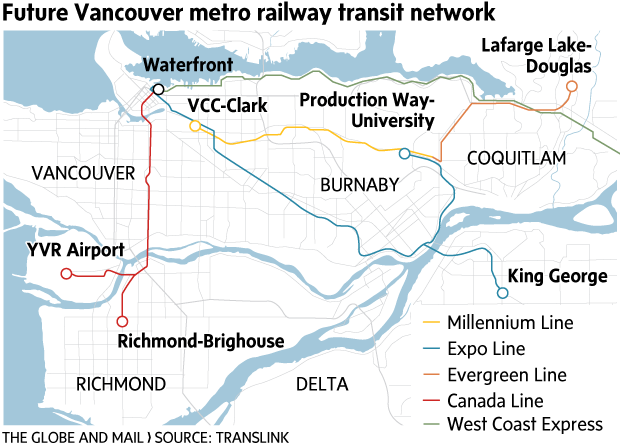 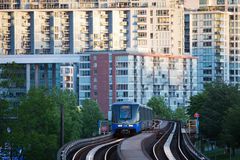