A massive tunnel drilling and water-treatment project that began on Vancouver's North Shore more than 10 years ago and has cost hundreds of millions of dollars more than planned is finally all over – except for the litigation.

The final construction phase of Metro Vancouver's $820-million Capilano-Seymour water project was celebrated by officials Thursday at the Cleveland dam on the Capilano River, as twin water tunnels became operational. The tunnels were originally expected to make up $200-million of the project's total budget, but that number has since doubled to $400-million.

One of the tunnels delivers raw water from the Capilano Reservoir to the Seymour water-treatment plant, while the second returns the filtered water to Capilano for distribution.

But a complex legal battle involving claims of negligence related to the boring of those twin tunnels remains before the Supreme Court of British Columbia. A trial is expected this spring, which could substantially affect the final cost of the project.

While the outcome of that case remains unclear, taps all over the city today are flowing with clean, filtered water that can now be provided year-round from either the Capilano or Seymour reservoirs. The treatment plant, in the Lower Seymour Conservation Reserve and built in 2010, had previously been treating only water from the Seymour Reservoir. The twin tunnels were dug for several kilometres under two mountains so Capilano water could also be treated.

"Completion of this system-wide water-enhancement project not only represents over 10 years of physical work, it represents vision and planning, ingenuity and collaboration," Greg Moore, chair of Metro Vancouver's Board of Directors said in a statement. "These massive twin tunnels … ensure an abundant supply of safe, world-class drinking water for future generations."

Darrell Mussatto, chair of Metro Vancouver's utilities committee and mayor of North Vancouver, said the region has some of the best drinking water in North America.

"Completion of this complex, state-of-the-art project will ensure that remains true into the future. It has been a monumental undertaking," he stated.

The project was supposed to have been completed years ago, but encountered delays when Bilfinger Berger Canada Inc., the company originally hired for $100-million to drill the tunnels, ran into construction problems.

After Bilfinger Berger had bored about half the length of the tunnels, the company halted work in 2008, citing safety concerns because of several rock falls.

In 2009, Metro Vancouver, a partnership of 21 municipalities, awarded a new $181-million contract to Seymour-Cap Partnership for completion of the tunnels.

The total cost for the entire Seymour-Capilano project, which included building the filtration plant and a power generating facility, is $820-million, of which $200-million was initially budgeted for tunnel engineering, construction and a steel liner.

A Metro Vancouver fact sheet states that after the initial construction delay, however, cost of building the twin tunnels doubled to $400-million, "but the net cost to Metro Vancouver will be dependent upon the results of litigation."

"An important area of factual dispute at the heart of this litigation is whether the rock conditions actually encountered in the tunnels were materially different than that expected, or than that which should have been expected," Madam Justice Susan Griffin stated in a March ruling in which she rejected an application for a summary trial.

Justice Griffin said the issues are extremely complex and the financial stakes are high.

"There are very large claims being advanced in this case," she stated, with Bilfinger facing a claim by Metro Vancouver in the range of $130-million, while making a counterclaim for $86-million.

The case, if it goes to trial as anticipated, is estimated to take 95 weeks of court time. 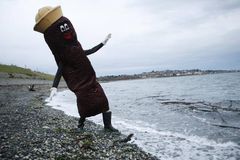 More drinking-water advisories for B.C. than any other province, report finds
March 16, 2015