The small picture of a black toilet on a white background above the word 'washroom' has become a big sign of inclusion for a rural school district in Saskatchewan.

Prairie Valley School Division, near Regina, has created all-gender washrooms at all of its facilities, including elementary schools.

Director of education Ben Grebinski says it was important to include elementary schools because transgender children of all ages need support from educators.

Read more: Everyone goes: Why it's time to reimagine sex-segregated washrooms

Read more: Sarah Hampson: The debate over upright urination is about more than symbolism

"You can't differentiate between a five-year-old and a 17-year-old. When you become familiar and aware of their preference, you have to be able to accommodate that preference," Mr. Grebinski said.

Parents were consulted on the policy that took the division a year to create. There was no human-rights complaint to force action.

"There was a little bit of opposition in certain circumstances because people felt kind of uncomfortable with this," said Mr. Grebinski.

"And what we found was that as soon as people became aware of the purpose and our intent here was to just provide humanity, with an opportunity to be expressive and to be who they were on an individual basis without any kind of alienation, people were very willing and accepting, so frankly we didn't have any challenges or issues."

Dr. Kristopher Wells, an assistant professor with the Institute for Sexual Minority Studies and Services at the University of Alberta, says elementary schools are becoming the new front line as parents seek support for their transitioning children.

"It's now not uncommon to be working to support transgender youth as young as six or seven," Mr. Wells said. "Ultimately, it comes down issues of safety and inclusion in schools and if students don't feel safe and they don't feel included, they're not going to be able to learn."

Mr. Wells, along with two transgender teachers, wrote a guidebook for the Canadian Teachers Federation on how to support transgender kids.

Their recommendations include creating a school policy ensuring all transgender students can use a washroom corresponding to their asserted gender identity. If students do not feel safe using these washrooms, the guide suggests schools provide access to a private or staff washroom.

"You start with the child first and you work outward," Mr. Wells said. "It's their decision to make, not anybody else's, and that's where we run into problems saying 'You can only use this bathroom'."

He points to a case in Edmonton last year where the family of a seven-year-old transgender girl filed a human-rights complaint against a school board after she was told not to use the girls' washroom. The student balked at the school's suggestion to use a gender-neutral washroom.

School boards across Alberta have since been given guidelines that say students have the right to use washroom and changeroom facilities aligned with their gender identity.

The guideline says schools should provide a non-gendered, single-stall washroom for use by any student for any reason, but also notes that students shouldn't be forced to use it unless it's their choice.

His transgender daughter, Bella, wasn't allowed to use the girls washroom at her Winnipeg school when she was eight.

There was a gender neutral washroom, but Bella didn't want to be forced to use it.

The Burgos family filed a human-rights complaint in 2014, alleging the River East Transcona School Division had discriminated against Bella. The complaint was settled in March. Details were kept confidential, but the school division did publish gender guidelines, saying it was the first division in Manitoba to do so.

Mr. Burgos is working for a school district in British Columbia now and said all the schools there have signs that say "this bathroom is for anyone."

That's key because transition can start early, sometimes as young as three-years-old, he said.

"To have the gender-neutral bathrooms or the right to use the bathroom that you associate with at a very young age – and I'm talking elementary – it's all about human rights. It's about feeling comfortable. It's about being who you are and people accepting who you are and really that's, again, the bottomline,'' Mr. Burgos said.

"It starts with bathrooms, but there's so much more to it."

Mr. Wells says there's probably a human-rights complaint against a school district in every province and territory right now on the grounds of gender identity. But he said the complaints rarely go to a judgment because the two sides reach a mediated settlement.

He thinks eventually there will be a case that goes to the Supreme Court of Canada where gender identity will be protected like sexual orientation.

Or as the sign on a gender-neutral washroom in a British Columbia high school simply says: "Whatever. Just wash your hands.'"

With it now common to see transgender children as young as six or seven, elementary schools across the country are creating gender-neutral, all-gender or unisex washrooms. Here's a look at a few other public places that have also taking this step:

Washrooms at the Canadian National Exhibition in Toronto had signage with a half-female and half-male logo above the words "We Don't Care."

The City of Regina says the new Mosaic Stadium, home of the Saskatchewan Roughriders, will have nine gender-neutral bathrooms.

The Royal Ontario Museum has three all-gender washrooms and the Canadian Museum for Human Rights says it has at least one universal washroom on virtually every level.

Everyone goes: Why it's time to reimagine sex-segregated washrooms
March 9, 2016 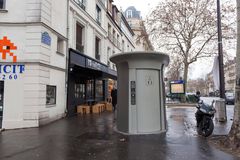 Sarah Hampson: The debate over upright urination is about more than symbolism
August 26, 2015 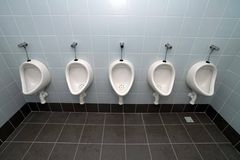