Backstage at her hastily planned concert, Amanda Palmer was a force, arriving from the TED Conference a few blocks away with a mass of energy and a blank piece of paper upon which to construct a set list. Outside, people were lined up around the block and then some for the pay-what-you-can fundraiser for the Greater Vancouver Food Bank.

Ms. Palmer, a musician who famously raised more than $1-million on Kickstarter, is in Vancouver to speak at TED. While here, she decided to mount an off-site show that would feature TED fellows and talkers, local musicians, as well as her husband, novelist Neil Gaiman.

Ms. Palmer tweeted about her TED-edition ninja gig (as she calls them) on Tuesday. Excitement built on social media immediately. Local event producer Sarah Shandl heard about it on Facebook, tweeted at Ms. Palmer Wednesday night, volunteered to help, and Ms. Palmer appointed her stage manager.

"The first time I met her, she was on stage and she asked who I was," Ms. Shandl said backstage at the Vogue Theatre, just before the show. "That was 15 minutes ago."

The barn-raising kind of show was a barnburner, with local musicians such as Geoff Berner and Sam Parton, and TED speakers including football star Chris Kluwe, power poser Amy Cuddy and Chris Hadfield, who brought the house down with Space Oddity. Then Ms. Palmer serenaded him with her song Astronaut.

The Globe and Mail spoke with Ms. Palmer in her dressing room immediately after the three-hour show.

How did you pull that off?

Why did you want to do this?

I do this all the time. When the Internet really came to be and social networking and Twitter started, I was so excited about the idea of not having to go through third parties to connect with people. And I love doing the work. I'm a weirdo. My idea of a good time is trying to make something chaotic and impossible happen. My favourite thing is watching a surprise manifest. [I] love watching people delight in the spontaneity of life. I just did this in L.A. and Austin and Sydney. This is how I have fun.

And now you're doing it around TED.

Very deliberately. Because the beautiful organizational ballet of TED still leaves you wanting a little bit of this after 10 at night. Everyone talks about chaos theory all day and you want to see it manifest. Also because I love TED and TED gets a lot of heat. And I empathize with anybody who is hated, including an organization like TED, which is highly controversial and takes a lot of flak from everybody. My own personal experience at TED is that it is ultimately doing good in the world. Yes it's a little weird, and yes there are elite bits of it, and yes there are rich people. But my entry points of TED was Jill Bolte Taylor's talk, Susan Cain's talk, Sir Ken Robinson. I had no idea that TED was hated until I went to TED. And I will happily defend TED's existence with all of its flaws.

And part of doing this was my wanting to be a personal bridge between TED and Vancouver. Because TED exists in a complete physical bubble. It's, like, trapped in a building and half of the people that I've met in Vancouver since I came here don't even know that it's on. That made me even more desperate to point to it and say this thing exists; they are not the enemy, they are actually emotional and intellectual allies. You're just going to need to get to know them, and I'm going to have to extract some of the emotional and intellectual cogs from within TED and take them out on the stage in Vancouver and show them to you, so that you understand they're not the illuminati. They're allies.

I've seen a lot of the same people and performances at TED this week and it's a totally different energy here tonight.

Totally. Right. And you know why? They spend a year organizing it. And we put this together today. I'm not advocating against organization. But there's a yin and a yang. There's always a fringe to the festival and making space for both is important.

You say you do this all the time. But was it special tonight?

Usually when I do these gigs I'm speaking to my community and I'm in my own little bubble. Tonight, I literally met 12 of the people onstage within the last 36 hours. And that feels like I'm acting as an actual bridge. All I want to do is show these people to these other people and I've done a little bit of that in the past but I've never done it on this scale.

Is it possible to pick a highlight moment tonight?

Playing a song that I wrote about astronauts to Chris Hadfield – do you need to ask me twice? I died a little inside. Actually, you know what? I take it back. Because that was probably my most selfish moment. I think my favourite moment of the night was sitting on the stage with all these people passing around a bottle of whisky, looking out at the packed-out house and watching Chris Hadfield, an astronaut who loves playing music, be cheered like a rock star. That made me really happy. Because that's a gift that I get to give him. 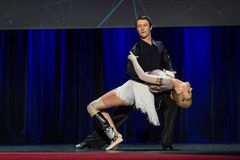 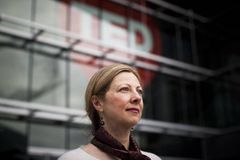 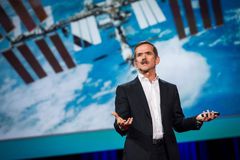 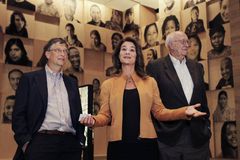 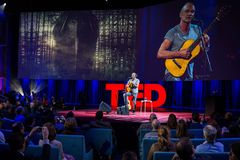