When the team of scientists returned from the dripping, primordial rain forest on Vancouver Island, they carefully prepared their specimens, drying, then grinding to a fine powder samples of tree trunks, plant leaves, soil, flies and beetles.

There, in the core of ancient Hemlock and spruce, in the traces of crushed insects and in the residue of berry bush foliage, tests found something remarkable - the isotopic signature of salmon.

How did the salmon get into the forest?

The bears did it, according to the research which illuminates the intricate connection between the biggest land predators in British Columbia - coastal black and grizzly bears - and their prime source of protein, salmon.

The importance of the bear-salmon nexus came into focus when conservationists and ecotourism operators raised fears last week that a wide-spread die-off of bears may be occurring because of a lack of chum.

Chum, a species of big salmon, is the number one target of fish-eating bears.

If there is a collapse of bears, it will have wider ecological implications because of the role they, and salmon, play in a healthy, functioning rain forest.

Fred Seiler, who runs Silvertip Ecotours, in Terrace, and who, for the past three months, has been swimming rivers to do salmon counts for government and first nation fisheries departments, was the first to sound the alarm about missing bears.

"I've got a crash I can't understand. … I'm really scared because a typical watershed where I count up to 45 bears, I've got a couple [of bear sightings] I've got no science. This is all anecdotal … but the bears are just not there," he said.

Mr. Seiler said on one river he swims, the chum salmon run has declined from 40,000 fish a few years ago to 1,000 this year. In another he swam 12 kilometres without seeing a single chum.

That claim, now under investigation by government biologists, has been disputed by hunting guides, who say the bears have simply shifted away from salmon streams to feed elsewhere.

"Talking with the outfitters that operate on the central coast, on a 10-day hunt, they are seeing 80 bears, 80 different grizzly bears," said Scott Ellis, spokesman for the Guide Outfitters Association of B.C.

While the debate is raging about whether the bears died, or simply moved into the rain forest to feed on berries, everyone agrees the loss of salmon could be catastrophic - not only affecting bears, but cascading down through the food chain, all the way to the forest floor.

Few know more about that than Thomas Reimchen, of the University of Victoria, who worked with colleagues on the research that tracked salmon isotopes into the streamside ecosystem.

Dr. Reimchen found bears were dragging so many salmon carcasses up riverbanks that they were fertilizing the surrounding forest and feeding a myriad of other species. He calculated up to 4,000 kilograms of fish carcasses can be found per hectare along streams where salmon and bears proliferate.

In another research project, he sat in the middle of a small stream on the Queen Charlotte Islands, while bears feasted nearby.

"The stream was only four meters across and … I'm sitting in the stream, as the bears would be foraging," he said.

And the bears never threatened him?

"No, absolutely not. Certainly in the night they were aware of my presence but they essentially ignored me … they ignore each other pretty much as well."

This lack of aggressiveness, common in bears when they are feeding on salmon, allowed Dr. Reimchen to make close observations and gain some remarkable insights.

The eight black bears that shared the stream with him captured 4,281 salmon over a 45-day spawning period. They would eat about 12 salmon a day, taking prime pieces, rich in fat.

"On capturing a salmon, bears generally bit through the top of the skull and ate the brain. When a gravid female was captured, bears applied pressure to the abdominal cavity either with their nose or foot, causing eggs to extrude onto the ground, which were then licked up. The abdominal cavity was then ripped open and additional eggs consumed. Subsequently, bears usually ate portions of the dorsal and lateral trunk musculature and generally ignored remaining tissues," he wrote in a research paper.

The bears always rejected the bony jaws, which gave Dr. Reimchen a dependable way to estimate how many fish the bears were eating. He made regular sweeps of the riverbanks, counting jaw bones.

The bears caught more than 70 per cent of the salmon returning to the small creek - but nearly 80 per cent of those fish weren't taken until after they had spawned, so there was little impact on the run's productivity.

Dr. Reimchen isn't sure what's happening to bear populations on the coast right now, but says a collapse of salmon runs would be catastrophic - not just for bears but for all the linked parts of the rain forest.

"A bear is one thing, but there are hundreds and hundreds of bird [species] there is tremendous insect diversity that is linked to the transfer of salmon into the forest [by foraging bears]and all these subtle, softer parts of that ecosystem are also being compromised by this collapse of the salmon. So the whole thing is compromised," he said.

If the salmon are gone it won't be just the bears we lose?

"Absolutely not. They are the major consumer. But, in terms of the ecosystem, there are a large number of species [dependent on salmon and bears]" he said. "To me, there's a bigger picture here than just bears."

Wayne McCrory, a consulting wildlife biologist, says if bears are in trouble, a lot has gone wrong. "They are probably one of the best of nature's indicators of the health of an ecosystem," he said.

Mr. McCrory is a bear expert whose field work has seen him crawling through the thick brush along salmon streams all over the B.C. coast. This fall, he has observed an absence of bears on rivers in the Great Bear Rainforest, but he hasn't yet reached any conclusions about why.

Bears will shift their feeding focus, he said. But without abundant sources of salmon, in the long run many bears will be doomed.

"There are concerns about the declines of the chum salmon. We've had horrible declines up there," he said. "I think some of the salmon declines have already been having an impact on the bear population and certainly I think [in]a lot of the areas there shouldn't be a grizzly hunt."

Mr. McCrory said while bears do feed heavily on berries, that may not be enough to sustain them.

"I think in some years the berries are very supplemental, but the berries are usually over towards the end of September. And then there are a few crabapples and mountain ash berries and they can dig roots on the estuary. Last year on the Mussell [River]estuary, the salmon were so low and the berries were so low … we watched one thin grizzly roto-tilling the estuary for [grass]root foods because there wasn't anything else for it," he said.

Others have seen bears breaking their teeth and claws trying to feed on rock barnacles.

Mr. McCrory said it's not clear how long coastal bears, which get 70 to 80 per cent of their annual protein from salmon, can survive when forced to substitute other food sources.

"None of this has been studied enough in my opinion to be able to say accurately how it's going to play out, but obviously it [the lack of salmon]is going to have an impact on the survival somewhere down the road," Mr. McCrory said.

"Certainly some of the bears that end up going to dens without enough body reserves or fat reserves are not going to wake up in the spring … and there's some suggestion that if the females aren't fat enough, because they have delayed implantation, that they will not fertilize; the ovum will not implant in the uterus."

"In my opinion bears are not successful at bringing cubs through the winter unless they have been able to bulk up with salmon … that doesn't mean the adults are starving. It means their condition is poor enough that their capacity to reproduce, or at least suckle the young [has deteriorated]" he said.

Dr. Reimchen said if bear populations aren't down now, they will be if the salmon don't return. "Bears are long lived and … if a food source starts to collapse on them, it could be the first ecological response is a reduction in condition and then reduced reproduction. … And if you come back in 10 years there's a pretty good chance, if this deficiency of salmon has continued, that your population will have dropped accordingly." 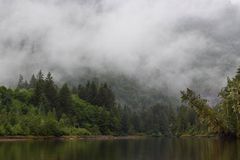 The bear-salmon equation
September 18, 2009
'A keystone species'
September 18, 2009
Follow Mark Hume on Twitter @markhumeglobe
Report an error
Due to technical reasons, we have temporarily removed commenting from our articles. We hope to have this fixed soon. Thank you for your patience. If you are looking to give feedback on our new site, please send it along to feedback@globeandmail.com. If you want to write a letter to the editor, please forward to letters@globeandmail.com.
Comments