I had always imagined that one day I would be able to walk by the tower at One Wall Centre, point up, and tell my children or grandchildren the tale of civic ineptitude and ego that led to the two-tone tower.

If you haven't heard the story, sometime in the late 1990s when the tower was still on the drawing board, city planner Larry Beasley approved what would become the tallest building in the city – at least for a time – on the condition that the glass encasing the building be light and airy enough to make the tower blend into the sky. Developer Peter Wall had a different idea. He imagined a much darker building, and when he submitted a sample of the glass to the city, the tint was approved by a low-level bureaucrat.

By the time anyone noticed, much of the bottom half of the building had been clad in black glass. The city sued and eventually struck a deal that the top third of the building would be clear glass – the kind originally intended.

Today, news that the clear glass on the upper floors is fogging up and needs to be replaced has raised the possibility that it could be replaced with the darker glass of the lower floors.

If that happens, pointing upward in the future and telling the story will have far less impact. I'll have to ask the next generation to imagine what the two-tone building looked like, and without any evidence they'll have no reason to believe me.

This has me worried about the bigger picture: Our Dumb Vancouver is vanishing. Today's symbols of ineptitude, outdated ideas, poor planning, blissful ignorance, wishful thinking and bald-faced greed are about to disappear. Get out there, and take it in while you still can.

It could be a walking tour. Download the audio guide and step right up, folks.

If you look up and to the left, you'll see the Georgia and Dunsmuir viaducts. You could argue they ought to remain as a monument to a battle won in 1968 – a battle that ended with the rejection of freeways and the preservation of Vancouver's downtown waterfront. But there's no question that at the time, building them as part of a "decommissioned" freeway was a dumb idea. Notice how the elevated road is repeated down here on the ground. If city Councillor Geoff Meggs gets his way, and these viaducts are taken down, where you're standing right now will be developable land, and another piece of Our Dumb Vancouver will be erased for all time.

Welcome to the corner of Main and Terminal, the site of the original SkyTrain Demonstration Line. Across the street, for your convenience, you'll see a frequently out-of-order automated public toilet. Behind you and up these stairs, you'll find unfettered access to the SkyTrain Expo Line. Yep, you can just walk on, if you're willing to risk a ticket. You may have noticed that at other stations along the line, construction has begun to install fare gates. TransLink, though, has recognized that some parts of Our Dumb Vancouver are worth preserving and has had the good sense to keep the Main Street station barrier-free for now.

Continuing now down Pacific Boulevard, it's hard to miss BC Place Stadium – not a civic initiative but one that sits in the middle of our city and pretty much speaks for itself. This was once the world's largest and possibly most under-used, air-supported domed stadium. But the $600-million renovation, which includes a new roof you see suspended above, catapults it into the stratosphere of dumb. Notice the dead-spider spires and the giant seizure-inducing TV screen at the foot of Robson Street. These two features assure the stadium's place in the annals of dumb for all time.

You're about to enter Vancouver's historic Stanley Park. While some of Our Dumb Vancouver hasn't been permanently lost, it has been disguised or modified to look less dumb. To your left, you'll find the Stanley Ho Chapel. Now, like so much of this city, it has been obliterated by a condo development. But imagine that it once stood alone, like a raised middle finger, blocking the view of Lost Lagoon. A mural was commissioned to try to disguise its hideousness. That mural has now been entombed but some day, when uncovered, will help tell this dumb story.

Ladies and gentlemen, our final destination is just a quick public transit ride away.

Welcome to the site of the former Little Mountain housing development. The hill to your right is Queen Elizabeth Park. To your left, you'll see six hectares of fenced-off mud where 224 units of social housing used to stand. It was family housing, and as you can see, close to transit and amenities. This property has been vacant for 3 1/2 years, the families who once lived here displaced. In a city starved for affordable rental housing, knocking down these homes any sooner than absolutely necessary is really the climax of Our Dumb Vancouver.

We hope you enjoyed the tour.

Condo building protested as threat to 'drug market'
May 8, 2018 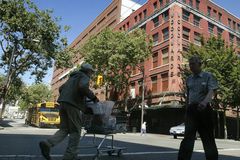 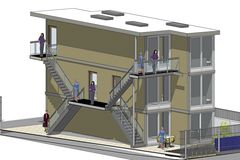 Adjusting to business in the Downtown Eastside
May 3, 2018 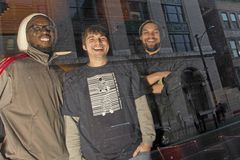