The anti-HST rallies are over for now, but observers foresee a lingering effect that could be perilous for provincial Liberals and good news for other conservative groups, especially the seat-less B.C. Conservatives who are seeking political traction.

The observations come after a weekend that saw 19 anti-HST rallies in cities across the province. More than 2,000 protesters gathered in Vancouver alone, for a gathering that is more likely to be remembered for its pairing of former Social Credit premier Bill Vander Zalm with NDP Leader Carole James than its opposition to the tax.

The movement is seeking to engineer a referendum on the tax. They need to get 10 per cent of voters in each constituency to oppose the combined 12 per cent provincial sales tax and GST, which comes into effect next July.

"Not a cake walk, but hardly impossible as some people are claiming," protest organizer Bill Tieleman, a communications director to former NDP premier Glen Clark, said of the goal of getting signatures.

While the anti-HST coalition is fairly broad, Michael Prince, a political science professor at the University of Victoria, said conservative voters may become disaffected with the provincial Liberals, a centre-right coalition of federal Liberals, federal Tories, former Socreds and others.

If enough voters on the right wing of the Liberal coalition, uneasy about the HST, soaring deficit and other government policies, drift away from the Liberals to the Conservatives or some new group, it could fracture the coalition, and either lead to its replacement or allow the NDP to win power.

The Conservatives prefer to see the HST furor helping their party. They endorsed an HST in their election platform, but have accused the Liberals of bungling its execution.

"It's an extremely important issue for our party," said Wayne McGrath, the party president.

"Small-c conservatives in B.C. have voted historically with the Social Credit party for a number of years, and then more recently with the Liberals."

That may no longer be a given, he says, because the Liberals have drifted from those conservative roots, particularly with the HST.

"[The HST]is the last straw for British Columbians who considered themselves conservatives, but have always voted for the B.C. Liberals thinking they were a conservative party."

Still, the Conservatives are a long way from a seat or power.

There have only about 750 members, but membership is growing by about two to three new recruits a day, Mr. McGrath said. "Up until now, we were lucky to get one or two a week."

The party ran 24 candidates in the last election and would like to run 85 come 2013.

"This will provide us with the opportunity that any fledgling political party needs," he said. "We're certainly going to attempt, in every way possible, to capitalize on it."

This coming weekend, they hold an annual general meeting in Chilliwack to begin the process of choosing a new leader by next fall.

Prof. Prince says the Liberal coalition has held until now, but may now longer be a forgone conclusion.

"[Premier Gordon Campbell's]pressing problem is within the family, within the coalition of this party."

In Alberta, the rightwing Wildrose-Alliance rode dissatisfaction with the governing Conservative party to a by-election win last week, securing a Calgary seat the Alberta Tories had held since 1969.

Prof. Prince sees some parallels between Alberta and B.C. The Liberals, he said, are adrift and unpopular, and their problem is that it isn't just their traditional foes who are upset, but also their own "background constituency" who are concerned.

"That's where these surprising shifts in power can happen."

David Mitchell, a former Liberal MLA who is now president of the Ottawa-based Public Policy Forum, says there is historic precedent for the perils the Liberals are now facing.

In the early 1950s, the coalition B.C. government of the day brought in a poorly run hospital-insurance program to help guarantee hospital services for British Columbians that helped spur the rise of the Social Credit party. With former Conservative W.A.C. Bennett as its leader, it spent 20 years in power.

"This is very speculative, but I do refer you to the historical precedent of an unpopular policy giving rise to a fledgling new party that ultimately swept to power," Mr. Mitchell said.

The Conservatives, he said, don't have to win to hurt the Liberals because they could affect splits among the parties, allowing NDP wins.

The challenge is for some new, credible voice to emerge as the leader of this new right wing opposition and "crystallize this anti-government sentiment and protest movement," possibly a current member of the Liberal caucus, he said, recalling the Bennett example.

"There are ghosts of B.C.'s past that are swirling around this controversy," he said. 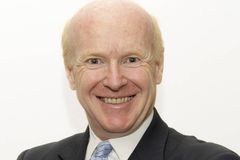