A small native band in northern British Columbia that has been trying for decades to get the government to stop a flooding problem that drowns graveyards every year is now offering its own solution.

The Cheslatta Carrier First Nation is proposing to come up with $275-million in funding to build a water release facility and hydro power plant on the Kenney Dam, a massive earth-fill structure that diverts the Nechako River into a reservoir, about 80 kilometres southwest of Vanderhoof.

"We don't want any money from the government," said Mike Robertson, a senior policy adviser with the Cheslatta. "We have lost confidence in the government … we have grown so frustrated waiting … that my hands are shaking right now just thinking about it."

Mr. Robertson said the reservoir backs up into Cheslatta Lake in the spring, inundating graveyards. He said 60 coffins have washed away since the dam was built in 1952, and each year there are fresh finds of human remains along the shore.

"Just recently we found a coffin lid.… we have collected about 50 bones this year, including the pelvis of what looks like a five- or six-year-old child," Mr. Robertson said. "You know, this haunts people."

DNA testing is being done on the bones to identify individuals.

On Wednesday, about 300 people gathered on the shore of Cheslatta Lake for a "return of the spirits" ceremony, which saw Roman Catholic priests bless three cemeteries and consecrate the lake as a graveyard.

"Coffins floated away and came to rest in various places. Now fishermen find the bones here and there, wherever they were deposited," he said. "It is very bizarre."

The Cheslatta, a band with a population of about 300, have been pushing for years to have a water release facility built into the Kenney Dam, both to relieve flooding and to help restore flows in the Nechako River. The dam doesn't have a power plant of it own. Its role is simply to hold back water that is directed further west to generate power for Alcan's aluminum smelter in Kitimat.

In 1997, Alcan – now Rio Tinto Alcan – agreed to put about $50-million into a Nechako Environmental Enhancement Fund (NEEF) to help compensate for the environmental damage done to the watershed. In 2001, NEEF recommended that a cold water release facility be built in Kenney Dam, but that proposal didn't get provincial funding and wasn't followed up on.

Mr. Robertson said the Cheslatta on Thursday made a new proposal to NEEF to tap into the money to help fund the project, which it will build in partnership with Surespan Construction Ltd. of Vancouver if an energy purchase agreement can be negotiated with BC Hydro.

Mark Rogers, vice-president of Surespan, confirmed a deal is in place with the band. "We see this as a great opportunity to achieve social and environmental goals … and at the end of the day of course it has to be a viable business proposition," he said.

Steve Thomson, B.C.'s minister of Forests, Lands and Natural Resources, said in about a month he expects NEEF recommendations on how the funds should be used.

Colleen Nyce, of Rio Tinto Alcan, said her company "is supportive of Cheslatta Nations economic and social development initiatives" but is waiting to hear from NEEF.

A BC Hydro spokesperson said the corporation is aware of the Cheslatta proposal, but is not currently negotiating with the band.

Native band rushes to save grave markers from floodwaters
October 5, 2011 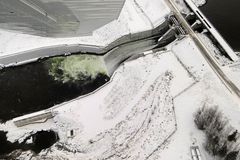 Project to help salmon past hot spot abandoned, Cohen Commission told
September 15, 2011
Follow Mark Hume and Justine Hunter on Twitter @markhumeglobe @justine_hunter
Report an error Editorial code of conduct
Due to technical reasons, we have temporarily removed commenting from our articles. We hope to have this fixed soon. Thank you for your patience. If you are looking to give feedback on our new site, please send it along to feedback@globeandmail.com. If you want to write a letter to the editor, please forward to letters@globeandmail.com.
Comments