Tattooed on Josiah Wilson's chest is a fine line of writing that combines two significant dates: his birth and the death of his biological mother four days after he was born.

The 20-year-old, who was adopted as a baby from Haiti, also carries a status Indian card.

He is African by race – but legally, culturally and ethnically he identifies as a member of the Heiltsuk First Nation.

The mix is not common, but Mr. Wilson says he's "never really had a problem with it" until last week, when he was expelled from a popular First Nations basketball competition in northern British Columbia.

His father says the tournament committee claims he lacks sufficient aboriginal bloodlines to participate in the All Native Basketball Tournament.

It's a decision that has not only upset Mr. Wilson, his family and community, but has raised questions about what parameters are used to define identity and membership in a group.

"There's no shame in having multiple identities," said Don Wilson, Josiah's father, a Calgary-based doctor born to an aboriginal father and Caucasian mother, who was raised in Bella Bella, B.C.

He said his son is proud of his fusion as Haitian, Heiltsuk, his adoptee status and birth ancestry.

"Josiah's never thought anything of it – being black and having a First Nations grandfather, a mixed-race father and a white grandmother.

"He's got a rainbow family," he said.

"It wasn't a strange thing for us. It seems that other people from the outside find it unusual."

Josiah Wilson, who said he's never really had to think about these issues before, agreed: "That's been pretty cool, having all these multiple identities."

But he's surprised by the sudden spotlight thrown on who he is and how it relates to the decision made by the tournament organizers.

Mr. Wilson was apparently excluded on the basis of race, a controversial choice over ethnicity, said associate professor Wendy Roth of the sociology department at the University of British Columbia.

Races are social categories that typically refer to biological or physical characteristics, while ethnicity relates to how someone is raised and their cultural upbringing, she said, adding that they often go hand-in-hand.

"Races are social categories that typically refer to biological or physical characteristics rather than cultural ones."

But that's not the case for Mr. Wilson – who is racially African and ethnically First Nations – and the committee may have conflated the two in interpreting the rules, Prof. Roth suggested.

"There's no reason to apply a racial standard, rather than an ethnic one."

Mr. Wilson's family is currently considering lodging a human-rights complaint, and records show there is basis for them to proceed.

Section 8 of the Human Rights Code of British Columbia states a person cannot be denied accommodation in a service or facility based on criteria including race, colour, ancestry or place of origin.

The provincial Human Rights Tribunal has released several decisions that have found the potential for discrimination based on the "core of Indianness," which it says involves matters integral to aboriginal culture or Indian status.

Complaints related to Indian status fall under federal jurisdiction, meaning if the Wilsons follow through on plans to file a complaint, it could be referred to the Canadian Human Rights Tribunal.

Mr. Wilson said he played for a junior aboriginal team for two years and was about to enter his third All Native Basketball Tournament with an intermediate men's team last week before he was told he could no longer play.

Prof. Roth said in the complex web of issues surrounding identity, she has a hunch he may have been sidelined for another reason.

An "inappropriate assumption" might have been made that Mr. Wilson has an unfair advantage as a basketball player, based on the disproportionate number of African-Americans who play professionally in the United States, she said.

"My guess is somebody wants to exclude him because he's good. And it has absolutely nothing to do with how he was raised or his ethnicity," she said. "Some team wants to press their advantage."

Mr. Wilson, who says he's skilled at his sport, chuckled at the suggestion that organizers might mistakenly believe his race gives him an advantage on the basketball court, saying he's heard similar speculation from friends.

"A lot of my friends and a lot of people who have been messaging me on Facebook are saying that – 'I'm better because I'm black,'" he said. "That's very funny." 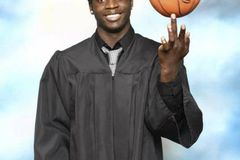