Arthur Manuel was born into indigenous activism. Working with the seeds his father, George, first sowed in the 1970s in the early days of Canada's indigenous rights movement, the tireless B.C. aboriginal leader was on the front lines of the international fight for aboriginal title and self-determination right up until he drew his last breath.

"Art went into hospital on Jan. 5 and went from talking about organizing his next meeting to being on a respirator," said his spouse, Nicole Schabus, a law professor at Thompson Rivers University in Kamloops, B.C. "He was sending people messages about the February meeting on the very day he went into the intensive care unit. He had been in North Dakota at Standing Rock just a couple weeks before that. He didn't know how sick he was."

Those who have worked alongside Mr. Manuel during a lifetime of indigenous activism were in awe of his commitment, strategic thinking and persistence, says indigenous policy analyst and long-time friend Russ Diabo. "Like his father, he definitely wasn't in it for the money," Mr. Diabo says. "The Manuel family is the closest thing we have in Canada to the Mandela family in terms of what they have sacrificed and contributed to First Nations rights."

Mr. Manuel died of congestive heart failure on Jan. 11, at the age of 65. His shattered family and friends around the world say the Secwepemc Territory leader is irreplaceable. Ms. Schabus says his unexpected death galvanized his many supporters to carry on his legacy of activism. The Vienna-born Ms. Schabus first met Mr. Manuel in Geneva, Switzerland, in the late 1990s, when Mr. Manuel took his concerns with the Canadian treaty process to the United Nations to make the case that the process contravened UN principles regarding self-determination.

Community organizing was such a big topic of conversation at Mr. Manuel's funeral on Sunday in Kamloops that one visitor noted to Ms. Schabus later that the service felt more like an educational opportunity than a funeral, especially with so many of the country's highest-profile rights activists in attendance. (Mr. Diabo says the service was a powerful call to action, "more like a symposium.")

Arthur Manuel was born Sept. 3, 1951 to Marceline (née Paul) of the Ktunaxa Nation and Grand Chief George Manuel of the Secwepemc Nation. He grew up on the Neskonlith reserve in the B.C. Interior, and went on to be educated at residential schools not because the government ordered him to, but because his impoverished father told his son he'd have to pick between residential school or a foster home. "[Arthur] didn't have an easy life as a child," Ms. Schabus says.

Mr. Manuel was at residential school when he first started organizing, to protest the terrible food. By his 20s, he was president of the national Native Youth Association. Over the years he went on to be a four-term elected chief of the Neskonlith Reserve, six-year chair of the Shuswap Nation Tribal Council, spokesperson for the Interior Alliance, and co-chair of the Assembly of First Nations' Delgamuukw Implementation Strategic Committee.

He continued as a spokesperson for the Indigenous Network on Economies and Trade until his death, and was a director with the Seventh Generation Fund for Indigenous Peoples. He was a popular interview subject in the indigenous media; numerous video interviews can be found online of the unassuming and soft-spoken Mr. Manuel arguing passionately for indigenous self-determination and title.

Mr. Manuel's father was president of the fledgling National Indian Brotherhood in the early 1970s – the foundation for what ultimately became the Assembly of First Nations – and of the World Council of Indigenous People. Arthur followed his father into indigenous activism from a young age and raised his own five children to do the same.

His twin daughters, Mayuk and Kanahus, have both served jail time for land-use protests at the Sun Peaks Resort, near Kamloops, in 2000 and 2001, and they continue to be involved in actions related to land use and resource management in their nation's traditional territory. Arthur's sister Doreen Manuel is a filmmaker who teaches and co-ordinates the Indigenous Independent Digital Filmmaking program at Capilano University.

Mr. Manuel's family first attracted media attention in B.C. in the mid-nineties, when he and his then-wife, Beverly Manuel, owned a gas station and store on the Neskonlith Reserve. They successfully fought the federal government's plan to create a complicated "coloured tag" system for cigarette sales, an attempt by Ottawa to combat cigarette smuggling by sorting buyers by race.

But it was his family's long protest against Sun Peaks Resort that brought him the most headlines. Angered by the ski resort's expansion plans and water-main construction on Neskonlith territory, Mr. Manuel and his supporters organized road blocks and protest camps for more than a year around the resort, 56 kilometres northeast of Kamloops. The case was in and out of B.C. Supreme Court for many years after that.

The foundation of Mr. Manuel's activism was fighting for indigenous people's rights to acquire and control traditional lands and the resources they hold.

He rejected the modern-day style of treaty negotiation, believing that it was more likely to lead to municipal-style governments under federal and provincial control rather than free indigenous nations controlling their own lands. Canadian law recognizes the inalienable right of indigenous people to their land, and Mr. Manuel pushed back hard against a B.C. government treaty strategy that envisioned First Nations agreeing to give up those rights in exchange for getting a treaty.

"It was the rise of the B.C. treaty process and the push to terminate Aboriginal title throughout British Columbia in the early nineties that drew Arthur into the struggle in a way that he would never turn back from," wrote Dawn Morrison, chair of the Working Group on Indigenous Food Security for the B.C. Food Systems Network, in Mr. Manuel's memorial booklet.

Mr. Manuel made the point in all his public presentations that as long as indigenous people in Canada control just 0.2 per cent of the land base, aboriginal poverty will never be addressed.

"Self-determination is the international remedy for colonialization," he told CBC Radio in an interview about his 2015 book Unsettling Canada: A National Wake-up Call. "The big issue is to deal with this 0.2 per cent so we can become more self-sufficient in our own territories. The land is big. There's no reason why indigenous people should be totally impoverished generation after generation after generation when the land is that large."

Mr. Manuel co-authored the book with his lifelong friend Ron Derrickson, a Kelowna developer and six-time elected chief of the Westbank First Nation who is known for being one of the wealthiest indigenous people in the country. (Mr. Derrickson funded much of Mr. Manuel's international travel, and recently described his friend as "the most intelligent person I've ever known.") The book won the 2016 Canadian Historical Association Aboriginal History Book Prize. The pair's second book, Settling Canada, is expected to be released in April.

In addition to his writing, Mr. Manuel typically worked long into the night on organizing. "We all don't have his endless energy," Ms. Schabus says. "I lived with him. I saw that he was constantly working. But he was also a good dad and a good granddad. He was a good sle7e, which is Grandpa in his language. He used to come home from a meeting saying he didn't want his grandkids to have to experience the same struggle."

The Manuel family's principled activism came at a price. Ms. Schabus recalls nights after the Sun Peaks protest when she and Mr. Manuel struggled to comfort his four-month-old grandson after his daughter Kanahus was jailed for four months for her part in the protest and wasn't allowed to take the baby with her. The family was vilified as trouble-makers in some media accounts, and in the late nineties, Mr. Manuel often found himself on the wrong side of other indigenous leaders who supported the proposed B.C. treaty process.

For much of the past 15 years, Mr. Manuel's activism focused increasingly on the international community. In 2009, he returned to Geneva to petition the UN Committee on the Elimination of Racial Discrimination to review the B.C. treaty process. In 2003, he sided with the U.S. lumber industry in front of the World Trade Organization to successfully argue that logging on traditional aboriginal territory constituted a form of trade subsidy because the real owners of the land weren't being compensated. Frustrated with his inability to sway the thinking of Canada's federal and provincial governments, he opted to ignore them instead.

"Going to Ottawa is a waste of time," he told Red Rising Magazine in an interview published last summer. "You have to quit crying on the shoulder of the guy who stole the land. … Take lawful action, but back it up by going all the way to Geneva."

But even while on the world stage, he remained committed to regional activism, according to those who knew him. The February meeting he was organizing at the time of his death was to plan the next steps for stopping the expansion of Kinder Morgan's Trans Mountain pipeline, which runs 1,150 kilometres between Strathcona County (near Edmonton), Alta., and a marine terminal in Burnaby, B.C.

"He gave us the map," Ms. Schabus says of her late spouse's recent work. "We've just got to keep pulling the pieces together. My world is shaken, but at the same time I've learned so much from these years with him. We must keep it going."

In the hours after his death, friend and fellow activist Naomi Klein tweeted: "Arthur Manuel had a beautiful and transformational vision for the world we need. But he died fighting in the world we have. Heartbroken." 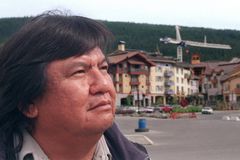