In a Canadian trademark battle, American Girl, a subsidiary of Mattel Inc., is trying to register "Caroline" as a trademark for its Caroline Abbott doll, an 1812-era historical character. American Girl dolls, which sell for about $110 (U.S.) without accessories, portray a range of historical and contemporary characters.

The Canadian Intellectual Property Office, however, initially blocked the request because American Girl's intended use of "Caroline" is too similar to the trademark "Carollyne," registered to Victoria artist Carollyne Yardley.

Ms. Yardley's trademark gives her the right to sell her art and other merchandise – greeting cards, children's clothing, toys and dolls – under the "Carollyne" brand. The list of wares includes her "Squirrealism" series, which features squirrel faces on human bodies in paintings, photographs and digital art.

American Girl is challenging her trademark through Section 45 of the Trade-marks Act, a potentially lengthy process. Ms. Yardley must prove she is actively using the trademark for the services and wares covered by her trademark registration. If CIPO decides the evidence she has provided is inadequate, her registration may be cancelled.

Ms. Yardley said she is fighting an expensive battle to protect her trademark, which provides her with income through the branding of products.

"I'm an artist in business – rather than receiving grant money or teaching to supplement my income. So the merchandise – which is an extension of my brand – is where my money is able to be recouped so I can continue to build the artwork."

Ms. Yardley said the legal fees to file her evidence have nearly been double the $3,000 to $5,000 amount she was initially quoted. She said she wants other artists and small-business owners with registered trademarks to be aware of the potential costs, and also the need to keep proper documentation and records of sales.

"You need to have a contingency fund to be able to pay to file your evidence. Because if you don't have money to file the evidence, you don't have any other avenues to go down other than to just let it be expunged."

Ms. Yardley said her expenses also increased because negotiations for a co-existence agreement – where two parties agree to use a similar trademark – were unsuccessful

She said she is concerned that even if CIPO decides she has enough evidence to support her case, American Girl may appeal the decision to the Federal Court of Appeal.

Julie Parks, director of public relations for American Girl, said she was unable to provide any details on the situation. Ms. Park issued a statement that said "American Girl generally does not comment on pending legal matters," and that the issue is under review.

Each American Girl doll is sold with a book that tells a story from the viewpoint of the character. Carole Abbott's character is a young American girl who helps her father during the War of 1812.

American Girl specialty boutiques are scheduled to open in Toronto and Vancouver on May 3. 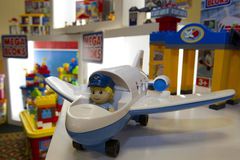