The $6-million Raven TMT project has been a decade in the making. On a Tuesday afternoon in December, it was time to pack, ever so carefully, the delicate device to ship to its destination atop a mountain in Hawaii, where construction has started on what is to be the world's most powerful telescope.

For mechanical engineer Colin Bradley, this was an anxious moment.

He leads a University of Victoria-based team that has developed image stabilization technology designed for the new Thirty Metre Telescope – the TMT – allowing astronomers to see farther and more clearly into space.

The TMT is set to come online in 2020. It is expected to be the largest and most advanced optical telescope in the world, with more than 12 times the resolution of the Hubble Space Telescope. The TMT promises the ability to explore the first sources of light when the universe formed: the Canadian technology may help find the first stars that formed our galaxy.

Like every other telescope on Earth, however, it first has to peer through the blurry atmosphere before it can search out the mysteries of the universe.

Raven has an answer for that challenge but, first, the international team of scientists and engineers needs to deliver the device without incident.

Like a pair of eye glasses, Raven adjusts for flawed vision. But at these distances, this requires micro-adjustments of its set of deformable mirrors – movements that take place at a rate of 500 changes a second. It is a delicate instrument.

Just planning for the instrument's transportation, in vibration- and moisture-proof crates, took months. It is to be reassembled near sea level and then driven to the top of Mauna Kea. At an elevation of roughly 4,200 metres, where frozen fingers fumble, and altitude sickness is a real danger, the equipment needs to be "plug and play."

The Raven project will first be tested on a more modest but still massive telescope, the eight-metre Subaru Telescope, already in operation on Mauna Kea. The mountain is crowded with telescopes – in the middle of the Pacific Ocean and high above the clouds, it promises clear skies most nights, and little light pollution.

Jeff Kennedy is the engineer tasked with getting it there in one piece. As he stood in the UVic loading bay, he was doing a last-minute check of the steel container that has been carefully fitted for the shipment. Some of the components weigh 725 kilograms. Dozens of small electronics and optical parts have been nitrogen-flushed and vacuum-sealed in individual containers. They all must withstand the vibration, sea air and shocks that will mark the two-week journey by truck and cargo barge from Victoria to the Big Island of Hawaii.

"I feel really confident at this point," Mr. Kennedy said. He is aiming for 100-per-cent success – not a single item should be damaged in the move.

Mr. Bradley will be on the other side, waiting for the arrival at the Subaru lab at Hilo Harbour on Jan. 7. Once installed, the device has 18 months to prove its worth while the TMT is built.

"We can measure how the atmosphere is changing in real time, and our instrument will correct that and remove those atmospheric aberrations," Mr. Bradley explained.

To do its job, Raven needs three stars to focus on, so that it can measure and correct atmospheric distortions. However, if it can't find enough stars in the right location, it can make one: by firing a laser beam into space it can create an artificial star.

Instead of focusing on a single item in space, Raven will allow the TMT to focus on multiple targets, reaching far into space, and far back in time. This kind of project offers the best kind of payoff that an engineer in applied research can hope for.

"It's nice to think the outcomes of the research will be be used in a practical way to probe the inner parts of the galaxy," Mr. Bradley said.

"The science motivation is very fundamental to people's curiosity. Even if you don't understand the mechanics of it all, I think everybody registers when you talk about, what is the origin of the universe, or are there other Earth-like planets, or what is the nature of dark matter?"

Raven is a prototype – what he calls a pathfinder instrument. Specifically, it is the first Multi-Object Adaptive Optics technical and science demonstrator to be installed on a telescope as large as Subaru, currently the fourth-largest telescope in the world.

Despite the millions of dollars spent on its development, the instrument is only designed to last for two years. If the technology proves itself to be viable, then the TMT version will be built – and it will be in demand around the world. It can be built into new telescopes but also retrofitted into existing ones.

The concept has been around for decades, but devices like this are only just becoming a reality.

"The idea was proposed back in the fifties before the technology existed," Mr. Bradley explained.

The Adaptive Optics Lab at UVic has been around for 12 years, and Raven is "a natural progression from research we were doing 10 years ago on the leading edge of astronomy instrumentation." The project is a partnership between The California Institute of Technology, the University of California, and the Association of Canadian Universities for Research in Astronomy.

But for all those bright minds, surely someone could come up with a more creative name than Thirty Metre Telescope?

"It leaves you a little bit speechless, in the lack of creativity," Mr. Bradley concedes.

At least it won't be confused with the VLT – the Very Large Telescope – in Chile. 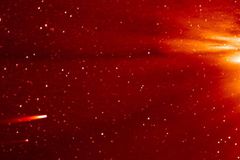 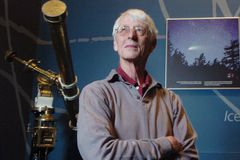 Where and when to get the best view of Comet ISON
November 25, 2013
new
Canada's largest radio dish finds life after decades of dormancy
August 11, 2013 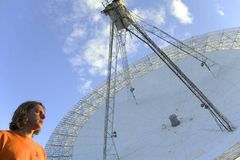