Alberta and British Columbia have struck an armistice in their pipeline fight, but neither is backing down from their positions.

Alberta Premier Rachel Notley announced the change Thursday afternoon, shortly after B.C. Premier John Horgan said his government will ask the courts if it has the authority to limit the expansion of oil transportation. Mr. Horgan's announcement was viewed by Alberta as an indirect tactic intended to cool the trade war.

Gary Mason: A blink from B.C. and a victory for Alberta, but pipeline battle continues

Ms. Notley said she's satisfied that British Columbia is "stepping back from the brink" of the dispute that has consumed both governments this month. She said she would suspend her province's retaliatory measures – most notably a ban on B.C. wine imports enacted two weeks ago.

Trans Mountain spokeswoman Ali Hounsell also said the company "is pleased that the province of B.C. is no longer proposing regulatory restrictions be placed on the expansion of diluted bitumen shipments."

Both provinces maintain they are not backing down from positions that started the interprovincial trade war. Mr. Horgan on Thursday said his government will separate the most contentious part of the province's recent environmental plan – a proposal that the province cap the volume of bitumen flowing through the pipeline – from other tenets. Mr. Horgan said a precise question to be referred to the courts will be drafted by lawyers in the coming weeks.

"This is intended to have cooler heads prevail. We believe that the rule of law is important in this country," Mr. Horgan said.

While the move sets aside the point for legal deliberation, it's unclear whether it will go far in resolving the longer-term Trans Mountain pipeline war of words between British Columbia on one side, and Alberta and the federal government on the other.

The B.C. Premier said the legal reference will seek to reinforce B.C.'s constitutional rights to defend against the risks of a bitumen spill – and that his government asked Ottawa to also participate but was rebuffed. A senior federal source said on Thursday said that answer was because there's nothing to adjudicate as the jurisdiction for the pipeline is clearly Ottawa's.

In Edmonton, Ms. Notley said the announcement from British Columbia – which she views as an agreement to abide by the law – is a win for jobs and investor confidence. She said she believes Alberta's position will be supported by the courts

Ms. Notley, however, noted Alberta is prepared to revive its retaliatory measures and continues to research further options to punish British Columbia in case Mr. Horgan's actions are not to her satisfaction.

In January, the B.C. government announced plans to develop additional measures to protect the province's environment from a heavy oil spill.

At that time, it said it would consult with B.C. residents on issues such as spill response times and response plans, but most controversially, that it would propose a discussion on regulatory restrictions on any increase in the transport of diluted bitumen.

Although British Columbia never spelled out how it intended to restrict the flow of oil, the announcement was interpreted as an effort to smother the Trans Mountain pipeline expansion, which is already struggling with delays. The B.C. NDP government has vowed to use "every tool in the toolbox" to try to stop the pipeline expansion, arguing it poses a risk to the province's marine environment.

The move enraged the Alberta government, which saw the proposed policy as a direct attack on the building of the Trans Mountain expansion and designed to sow uncertainty about whether the project would be allowed to proceed. Ms. Notley said B.C. is outside of its jurisdiction by proposing to control oil flow through an interprovincial pipeline, and launched a ban on B.C. wine in retaliation.

Mr. Horgan, in turn, viewed that as "disproportionate and unlawful."

He said his government will retain expert legal counsel on what it believes is its right to take appropriate measures to protect from the drastic consequences of a diluted bitumen spill. And he said the outcome of that reference will also be used to inform any next steps by his province.

"I believe that the federal government and the government of Alberta do not understand the depth of feeling that the transport of diluted bitumen has in British Columbia."

With files from Justine Hunter in Victoria and Carrie Tait in Calgary. 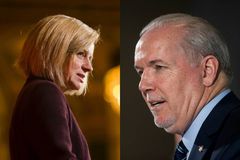 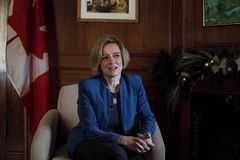 A trade war threatens the ties that bind Alberta and B.C.
February 9, 2018 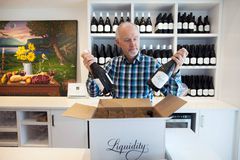