The B.C. business community roused itself this week to defend the creature it helped create, a sure sign that the anti-HST campaign has gained some traction.

Since last summer, the supporters of the harmonized sales tax assumed the change was a done deal, that starting on July 1 they would begin to reap the benefits of a $2-billion tax shift.

Then along came Bill Vander Zalm with his thousand-watt smile and his "people's army," and now some small doubts are starting to grow.

Make no mistake, Mr. Vander Zalm still has very big hurdles to clear before he can really put the transition to the HST in jeopardy, even with the B.C. New Democratic Party making every effort to help turn his petition initiative into a success.

Still, big business is starting to wonder if those meddling kids might just throw a wrench into their plans. And the finger-pointing on the pro-HST side suggests that even if the HST survives, the B.C. Liberal government, now in its third term of office, is in trouble.

"The problem is, people don't like the government and that's the condition we are operating in," said Jock Finlayson of the B.C. Business Council. He released a report this week seeking to explain how the HST will help the province's economy, but he doesn't expect it will resonate with the grassroots supporters of the Vander Zalm campaign.

And while NDP Leader Carole James doesn't frighten the ranks of business, the resurrection of the charismatic, media-friendly former premier does.

Mr. Finlayson is an economist, not a politician, but he has no trouble analyzing how it all went wrong. Gordon Campbell and his Liberals campaigned in last spring's election as the best custodians of the public purse, insisting their prudent management would result in a modest deficit. Shortly after winning, they sprang the news of a record deficit that required a new tax to help dig the province out of its deep fiscal hole.

The business council lobbied for the HST, which combines the provincial sales tax with the federal Goods and Services Tax to create a broader 12-per-cent levy. Now the council is trying to defend the tax because it can see Mr. Campbell's government is taking a hit. "But we can't help too much if people don't like the government or the Premier," Mr. Finlayson said.

Rick Jeffery, president of the Coast Forest Products Association, has also stepped up to explain how the grassroots campaign against the HST threatens the 12,000 jobs in his industry.

"The HST is critical for the future of our industry, for our communities and for our workers," he wrote. Without it, the crushing weight of the rising Canadian dollar will ensure B.C.'s industry cannot compete, he argued.

"Our sense is the need to step up to the plate right now is impacted by Mr. Vander Zalm's antics here," Mr. Jeffery said in an interview when asked why he felt the urge to tap out a press release this week.

That sentiment has been recognized even within the Liberal ranks. Finance Minister Colin Hansen conceded as much last month: "There are so many groups out there, who, if Gordon Campbell says it's white, they'll say it's black regardless of what the facts are."

The sense that Mr. Vander Zalm might be on to something, after all, also explains the recent stampede of New Democrats to join his army of canvassers.

MLA Mike Farnworth expects to spend this weekend in his suburban riding, soliciting signatures for the repeal-the-HST petition. If the weather is good, he'll likely plant himself in front of a nursery to capture the swarms of gardeners. More than half of the B.C. NDP caucus have been formally registered to collect signatures.

For Mr. Farnworth, a veteran of political campaigns, it is refreshing to be a part of something that doesn't follow the usual stark lines of two-party British Columbia. "The hostility to it in this province is so great, it can't help but be across the political spectrum," he said. "It is about real grassroots anger."

Mr. Farnworth sees a chance for this to become another Meech Lake, a Charlottetown II. The elites and the men in suits are preaching about the need for change and The People aren't buying it.

It just happens that Mr. Vander Zalm plays to that crowd better that Ms. James.

"People are sick and tired of being told what is good for them by small groups of people who don't understand the challenges they face," Mr. Farnworth said. Whoever is fronting it, the New Democrats would like to be on the winning side of that one. 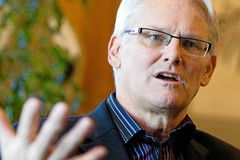 Jack Layton urges Stephen Harper to suspend HST in B.C.
April 22, 2010
Follow Justine Hunter on Twitter @justine_hunter
Report an error Editorial code of conduct
Due to technical reasons, we have temporarily removed commenting from our articles. We hope to have this fixed soon. Thank you for your patience. If you are looking to give feedback on our new site, please send it along to feedback@globeandmail.com. If you want to write a letter to the editor, please forward to letters@globeandmail.com.
Comments