British Columbia's social-housing providers have joined the provincial government in offering safer spaces for drug users to inject, not waiting for the federal approval needed to open official supervised consumption sites such as Vancouver's Insite.

Janice Abbott, chief executive of Atira Women's Resources Society, said Atira made available about 18 "shared using rooms" at its various buildings beginning late December, providing a space for residents to use in the company of their peers. Sterile supplies are provided and staff members trained to use the overdose-reversing drug naloxone are steps away.

"If you have tenants who are coming together and using in a space, there is less running around the building, less time to get to someone who's overdosed," Ms. Abbott said in an interview on Tuesday. In the past three months alone, the Atira community has lost 11 women to drug overdoses – more than the organization had lost in the past decade, she said.

"Are we skirting federal law? You could make that argument, I guess, but we weren't prepared to wait for changes to save lives," he said Tuesday. "These are, we hope, temporary measures until we get approval for supervised consumption sites in all areas of the province. You have to do what you need to do to keep people alive."

PHS Community Services, which manages a building in Victoria that has an overdose prevention site, is in discussions with Vancouver Coastal Health to open more such rooms at its buildings in Vancouver.

"If you have a dedicated space, you're able to instantly intervene, so it's safer for everyone," he said. "It also helps to eliminate the risk of people using alone."

Ms. Abbott and Mr. Lake made their comments on Tuesday at an event to open 38 new women-only substance-use beds at Atira's Rice Block building in East Vancouver.

The B.C. government had pledged 500 such beds by 2017 during the last provincial election; these new beds will bring the total to about 400 by month's end. Mr. Lake said the remaining 100 will open by the end of March.

Ms. Abbott told The Globe and Mail the organization had wanted to offer abstinence-based recovery beds since 2009, but a push by Vision Vancouver to house the city's homeless saw the idea put on the back-burner in favour of low-barrier housing instead.

When an additional BC Housing building was made available to Atira, Ms. Abbott said, the organization transferred residents of the Rice Block over and returned to its original vision.

"Not all women are ready for, or want to explore, reducing or stopping substance use, but for those women who do, there's a dearth of programs and beds available [for] them," she said.

Ten of the beds are intended for short-term stays, such as during the detoxification period. The

remaining 28 are transitional beds intended for post-treatment stabilization. Women can stay here for anywhere from six to 18 months. The first women moved in on Tuesday.

Vancouver Coastal Health will provide about $164,000 annually for operating costs, while BC Housing will provide about $800,000. Two staff members will be on site 24 hours a day, seven days a week and nurse practitioners will provide primary health care for a few hours each day, five days a week. Clients can access addictions groups, parenting groups and therapy for concurrent disorders.

A women-only overdose prevention site is planned for a building near Oppenheimer Park in East Vancouver that is currently being used as a cold-weather shelter. 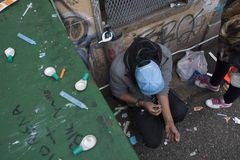