British Columbia's former children's watchdog is suing the provincial government for breach of contract over pension benefits, alleging "malice and bad faith" stemming from her 10 years as one of the province's fiercest critics.

In a notice of civil claim filed in B.C. Supreme Court on Friday, Mary Ellen Turpel-Lafond says that her taking the role of B.C.'s first representative for children and youth (RCY) hinged largely on her receiving a comparable salary and pension to her role as a Provincial Court judge in Saskatchewan, from which she sought a leave of absence.

Ms. Turpel-Lafond said she was assured on several occasions that she would receive 1.5 years of pension credit for each year of service; however, she worked her last day as RCY in late November, and has not since received an increased pension entitlement, the claim states. Instead, she's getting one year of pension credit for every year served.

Greg Anctil, Ms. Turpel-Lafond's lawyer, said his client is entitled to 15 years' pension credit for her 10 years of service under the verbal agreement.

"She was not eager to file a claim," Mr. Anctil said Sunday. "We hoped the matter could be settled directly. But we felt we needed to file and use the court processes to move the case forward."

B.C.'s Ministry of Justice acknowledged receipt of the notice of claim but did not make anyone available for an interview on Sunday.

"Counsel will review the allegations and prepare a response in due course," the ministry said in a statement.

The province has 21 days to respond.

Ms. Turpel-Lafond's tenure as children's watchdog was punctuated with high-profile cases that often left the provincial government on the defensive. A recent example is the report into the in-care death of Métis teen Alex Gervais, which exposed numerous mistakes by the provincial Children's Ministry, including that it had no idea how many children in government care were housed in hotels.

When Mr. Gervais leapt to his death from a budget hotel window in September, 2015, the ministry said it was a rare last resort to house children in hotels, and that it was aware of only one other child in such a placement. A report released the following January found that, in fact, 117 children had been placed in such accommodations that year.

Ms. Turpel-Lafond had to fight for funding and access in her role, and has said that the provincial Liberal government became increasingly confrontational under her tenure.

The civil claim attributes the province's failure to provide or acknowledge the enhanced pension entitlement to "malice and bad faith."

"The Defendant has demonstrated a history of animosity and hostility toward the Plaintiff in her role of RCY," the claim states.

It cites as examples the fact that Children's Minister Stephanie Cadieux refused to meet with Ms. Turpel-Lafond in the final 12 months of her role as RCY; that she was told the government would treat her as a "member of the opposition"; and that the government had developed a strategy to personally target Ms. Turpel-Lafond's work.

The claim also referenced an independent report released in late 2015 that was intended to examine a specific case involving the abuse of children who had been ordered removed from their mother's care. Commissioned by the government and written by a former deputy minister, the report instead called for sweeping changes within the Children's Ministry, including the phasing out of Ms. Turpel-Lafond's position.

Ms. Turpel-Lafond is seeking aggravated and punitive damages, as well as damages for bad faith conduct and mental distress. 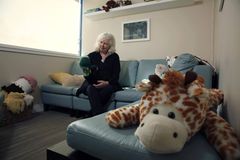 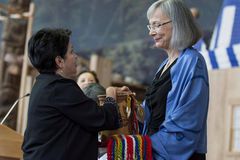