Powell River was founded by the timber industry, but the small Sunshine Coast community about 145 kilometres northwest of Vancouver is in an uproar now that loggers are cutting trees right in the heart of the city.

Since loggers started clearing roads through the urban forest a few weeks ago, there have been packed public meetings and threats of an injunction by an environmental group. More than 1,000 people have signed an online petition calling for an end to the logging of what is known as Lot 450.

Island Timberlands, which holds timber rights to several hundred hectares of forest land owned by the community, has announced plans to cut the area over the next several months.

Judi Tyabji, president of Pebble in the Pond Environmental Society, said it would be like allowing some of the big parks in Metro Vancouver to be logged.

"If Stanley Park had its back to the wilderness so it was an intact wilderness corridor, that's Lot 450," she said.

Ms. Tyabji, a former Liberal MLA and Powell River municipal councillor, said her group will go to court seeking an injunction to block logging on the basis of a study that "shows the undeniable wildlife values on that land."

She said the Lot 450 lands connect to a forest that runs up from the city waterfront into the mountains behind Powell River, creating a key wildlife corridor.

In 2006, the City of Powell River, Tla'Amin First Nation and Catalyst Paper Corp. worked out a deal that transferred ownership of several hundred hectares of company lands within municipal boundaries to the city.

But the timber rights were held separately, and cutting rights on Lot 450 ended up with Island Timberlands, based on Vancouver Island.

Ms. Tyabji said Powell River, founded in the early 1900s to service a pulp mill, has long depended on the logging industry, but the economy has changed in recent years and people are not going to sit quietly while the green space in the middle of town is clear cut.

"Even loggers are upset about this," she said. "Certainly, people in Powell River are used to forestry, but Powell River has diversified dramatically [away from logging in recent years]. One of our larger employers now is an international music academy. … We get people coming from all over the world for the canoe routes here. The whole idea of wildlife value [is high]."

She said having a forest in the middle of town "has defined Powell River," and people are ready to fight to preserve the wooded area, which is laced with popular hiking trails.

Company officials did not respond to requests for comment on Monday, but Island Timberlands said in a statement published in the local paper recently that it plans to log the land carefully.

"Island Timberlands employs qualified professionals to ensure our forest activities have considered a full range of public values including but not limited to localized riparian areas and recreational trails," the company stated. "Island Timberlands recognizes this activity will be audible to some of our residential neighbours. We will work within the confines of the city bylaw on noise disturbance to best maintain the peace and enjoyment during our operations."

Powell River mayor Dave Formosa declined to discuss the issue on Monday, saying he would be in meetings all day "arm wrestling" with Island Timberlands.

"It's very complicated," he said of the logging dispute. "I'm [in] back-to-back meetings, and I'm still in the middle of dealing with this issue."

He said he hoped to have an announcement on Tuesday. 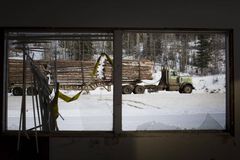