British Columbia's NDP government has taken the first steps toward becoming the only province outside Quebec with a publicly funded daycare system, launched with a $1-billion investment over three years.

Although the NDP backed off its election campaign promise of a Quebec-style $10-a-day childcare system, the plan outlined on Tuesday pledges a "universal" child-care initiative that will create 22,000 new child-care spaces, offer child-care subsidies to tens of thousands of families and train thousands of new early childhood educators.

"We know that our vision for universal child care requires a shift that will take time," Finance Minister Carole James said in announcing the launch of a 10-year effort to reform child care.

She said as the plan evolves over a decade, some people will be paying $10 a day. Other provisions over the next three years will see families with pretax incomes of $45,000 or less paying nothing.

Parent Laura Cornish was quick to forgive the NDP for the shift from its campaign pledge. The 32-year-old product manager for a software company and her carpenter husband, David Hadgkiss, are facing an $855 monthly daycare bill – soon to increase by $100 – for their four-year-old daughter. They also have a 10-month-old son whom Mr. Hadgkiss is caring for.

Ms. Cornish said the plan will positively affect their household finances, as well as her stress levels.

The NDP announced two programs in the budget, both of which would help Ms. Cornish and her family. Her annual family income falls in a bracket that would lead to a monthly benefit of $772 in one of the programs, and $350 in the second concurrent program, to reduce fees.

"I hope this is the new standard," Ms. Cornish said. "This is s significant step change. This is a significant difference in our monthly budget that means I will be able to make more long-term changes for our family."

Budget documents note child-care fees hit a median $1,250 a month for infant and toddler care in Vancouver and $1,000 a month on south Vancouver Island and the Kootenays.

A new affordable childcare benefit will offer benefits of up to $1,250 a month per child, affecting 86,000 families once it is fully rolled out by 2020. This benefit will be tied to income, and paid to operators to reduce fees. It will be available to parents using licensed providers for infants, toddlers and three- to five-year-olds. Ms. James said operators will have to sign contracts with the government to apply the funds to fees in order to receive money from the government.

At the same time, the government is also moving to lower the cost of licensed care – by between $60 a month for licensed family care for children aged 3 to 5, and $350 a month per infant or toddler in licensed group care. This program is not tied to income and is expected to affect up to 50,000 families.

Both of these programs will cost $630-million over three years. The government is budgeting $237-million over the same period of time to create 22,000 new child-care spaces, as well as maintain current spaces, and to encourage service providers to offer more flexible hours. Over the three years, the plan also calls for $136-million to bolster education opportunities for early childhood educators.

The Coalition of Child Care Advocates of BC, which has been advancing a campaign for $10 care, was satisfied with the government's commitments, saying in a statement that the funding was a good step forward. "Thousands of $10 a day supporters called on government to take the first steps to fix B.C.'s child-care chaos and today the B.C. government did just that."

Iglika Ivanova, a senior economist with the Canadian Centre for Policy Alternatives' B.C. office, said the program was unlike anything she had seen in modern B.C. social policy in a generation. "Milestone is a great way to put it," she said.

While she said there was work ahead to create the universal child-care program promised on Tuesday, "the foundation is laid."

The government program is focused on licensed service providers, though the NDP said it will support unlicensed family-care providers in becoming licensed.

BC Liberal child-care critic Laurie Throness stated that it was clear British Columbians wanted more done on child care, resulting in their government's commitment on the issue last summer in a budget delivered just before the Liberals were defeated in a confidence motion. 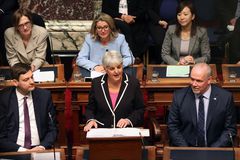 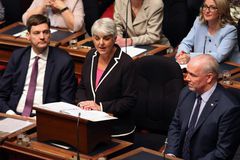 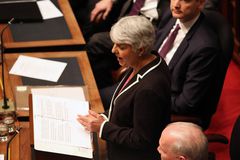